University, institute to be hub for causes of African-American Catholics 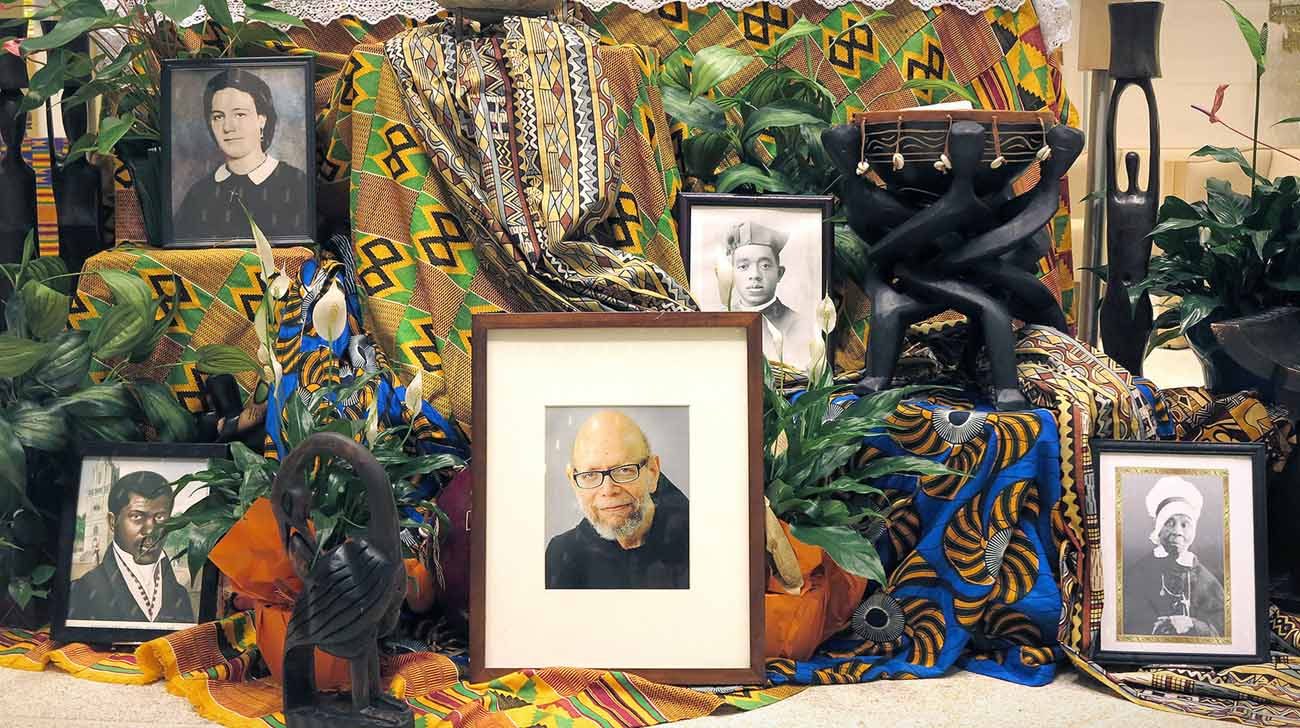 Pictures of five candidates for sainthood are featured on the altar at St. Katharine Drexel Chapel of Xavier University of Louisiana in New Orleans July 31. An announcement was made that day that Xavier would be the center for coordinating the advancement of all African-American sainthood causes. (CNS photo/Christine Bordelon, Clarion Herald)

UPDATED – NEW ORLEANS (CNS) — Reynold Verret, president of Xavier University of Louisiana, announced July 31 that the university and its Institute for Black Catholic Studies will become the new hub for the advancement of sainthood causes of African-American Catholics.

Verret made the announcement in the university’s St. Katharine Drexel chapel.

Verret said Xavier and its Institute for Black Catholic Studies will serve as hosts and administrators, and Chicago Auxiliary Bishop Joseph N. Perry will be moderator and chair of the center, whose goal is to unite all guilds advancing the causes of black sainthood.

Bishop Perry is postulator of the cause of Father Augustus Tolton, the first recognized African-American priest. Father Tolton has the title “servant of God” at this stage in his cause.

The center’s initial focus will be on the canonization of Father Tolton and Pierre Toussaint, Mother Henriette Delille, Mother Mary Elizabeth Lange and Julia Greeley, Verret said, with the hopes, this fall, of adding to its efforts the cause of another ground-breaking black Catholic, Sister Thea Bowman, who taught at Xavier’s Institute for Black Catholic Studies.

Sister Bowman,a Franciscan Sister of Perpetual Adoration, was renowned for her preaching. She died in March 1990 at age 52. Her cause was opened in 2017 and she was declared a “servant of God.”

The eventual goal, Verret said, is to establish “a resource center at Xavier with scholarly work on the lives and work” of the African-American sainthood candidates and of St. Kateri Tekakwitha, a Native American canonized in 2012, and St. Katharine Drexel, a white Philadelphia heiress who used her inheritance to found the Sisters of the Blessed Sacrament to minister to African-Americans and Native Americans.

A brief update was given during the announcement by promoters of the causes of five of the sainthood candidates: 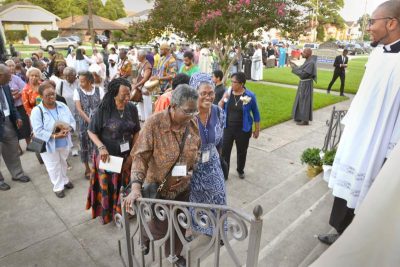 — Father A. Gerard Jordan, representing Bishop Perry, described Pierre Toussaint as a former slave and hairdresser who purchased freedom for his family. Toussaint has been declared “venerable.”

— Father Jordan also talked about Father Tolton, a former slave from Missouri whose family used the Underground Railroad to find freedom in Illinois. He trained for the priesthood in Rome because he was refused entrance into American seminaries and was ordained in 1886. He suffered threats while pastoring in his Illinois hometown and moved to Chicago to found St. Monica’s, the city’s first black parish.

“His life was a life of courage,” Father Jordan said. The cause for his canonization was proclaimed in 2011. He was named a “servant of God” in 2012. The Vatican Congregation for Saints’ Causes declared affirmatively to the validity of the inquiry into his life in 2015. His remains were exhumed in 2016, and his “positio” was approved so his cause can move forward to the pope.

Father Jordan also said the five candidates were universal saints for everybody, and their causes are “not in competition but in communion” to recognize black Americans who are people of virtue.

— Sister Magdala Gilbert, an Oblate Sister of Providence, discussed Mother Mary Elizabeth Lange, her order’s founder and a “servant of God.” Sister Gilbert described her “as a no-nonsense woman who did what she had to do.” She worked to educate African-American children when it wasn’t popular: “When you have God at your side, you fear nothing.” Mother Lange’s cause began in 1991 but was recently assigned a new postulator in hopes that the “positio,” or position paper, on her life will be completed this October.

— Sister Greta Jupiter, a member of the Sisters of the Holy Family, talked about the cause of Mother Henriette Delille, who founded the order in 1842. She was declared “venerable” in 2010 by Pope Benedict XVI. Two miracles attributed to her intercession are being examined. In general, one authenticated miracle is required for beatification and a second such miracle for canonization.

— Mary Leising described the Denver Archdiocese’s progress made on the cause of “Angel of Charity” Julia Greeley of Colorado. Born in Hannibal, Missouri, she worked and walked the streets of Denver collecting food, coal, clothing in a little red wagon and delivered the goods at night to the needy. She joined the Secular Franciscan Order in 1901. A guild to research her sainthood was established in 2011. Her cause was opened by Denver Archbishop Samuel J. Aquilla in 2016. On Aug. 10, the archdiocese will close its investigative phase and send its findings to Rome.

It also was where Mother Henriette Delille began her ministry to the poor and elderly; and where civil rights activists Homer Plessy, attorney A.P. Tureaud and many musicians prayed. It also is home to the “Tomb of the Unknown Slave.”

Along the route, Bishop Cheri referenced Congo Square as a place where free people of color congregated, the Mahalia Jackson Performing Arts Center (named after the New Orleans-born gospel singer) and how native Louis Armstrong was baptized Catholic at Sacred Heart of Jesus Church on Canal Street.

When passing Corpus Christi-Epiphany Church, which merged after Hurricane Katrina, Corpus Christi Parish, founded in 1916, was noted as once being the largest African-American parish in the world and was considered “Queen of the Josephite missions.” Bishop Cheri recalled there being about 53 majority-black parishes in New Orleans; now, the number is close to 24 parishes and three predominantly black schools.

At the Sisters of the Holy Family Motherhouse in Gentilly, Sister Laura Mercier said when her order’s founder is canonized, she would be the first native-born African-American saint. “Her life will be a reminder that everyone can be a saint, no matter what color they are,” Sister Laura said.

Blessed Sacrament Sister Eva Marie Lumas, interim director of the Institute for Black Catholic Studies, said Xavier University is a special place that understands the woes and giftedness of the African American community and a perfect place to honor black Catholic ancestors who walked before and contributed much to society and the church.

She said elevating these African-Americans to sainthood is “a witness to advancing some who are ordinary people who did extraordinary things, and extraordinary people that understood the frame of reference of ordinary things …” While they might not have seen the fruits of their labors in their lifetime, these candidates for sainthood did what was right anyway by standing tall, walking, talking and showing how to do it right.

“It is both appropriate and significant that this joint effort to promote the cause for sainthood for these six extraordinary individuals should originate at Xavier,” Verret said.

NEXT: Accused archbishop’s fellow prelates weigh in on abuse scandal