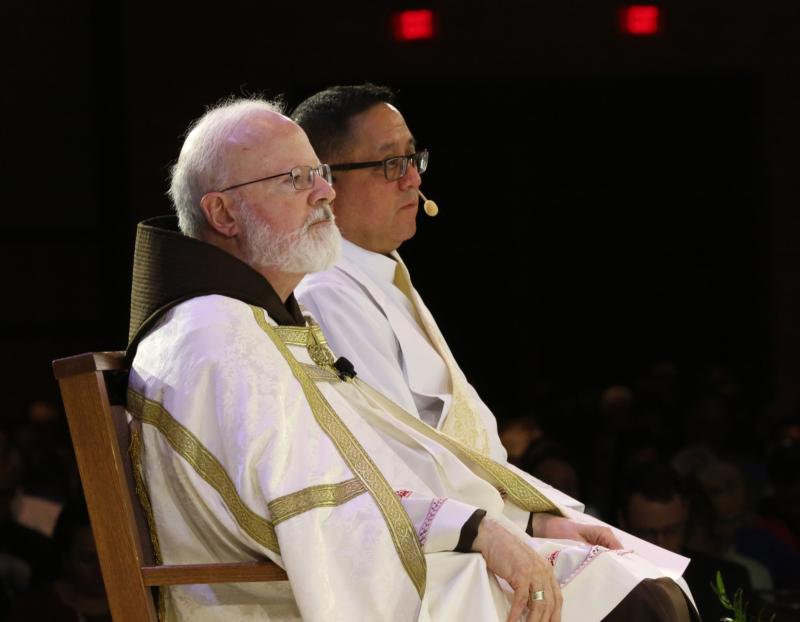 Boston Cardinal Sean P. O'Malley and Deacon Bernie Nojadera, executive director of the U.S. bishops' Secretariat for Child and Youth Protection, are pictured during the 2017 Catholic convocation in Orlando, Fla. In an Aug. 13 interview, Deacon Nojadera said he and his staff at the secretariat are receiving calls from people concerned about the current abuse crisis in the church. "Our fist job," he said, "is to listen, to be empathetic." (CNS photo/Bob Roller)

Boston Cardinal Sean P. O’Malley and Deacon Bernie Nojadera, executive director of the U.S. bishops’ Secretariat for Child and Youth Protection, are pictured during the 2017 Catholic convocation in Orlando, Fla. In an Aug. 13 interview, Deacon Nojadera said he and his staff at the secretariat are receiving calls from people concerned about the current abuse crisis in the church. “Our fist job,” he said, “is to listen, to be empathetic.” (CNS photo/Bob Roller)

WASHINGTON (CNS) — After the first allegations of abuse against Archbishop Theodore E. McCarrick were publicized in mid-June, employees at the U.S. bishops’ conference headquarters in Washington were bracing for calls from Catholics confused, outraged or anything in between regarding the emerging scandal.

The big surprise: More Catholics were calling in — and kept calling — to ask how they could be foster parents to immigrant children who had been separated from their parents by the U.S. government at the U.S.-Mexico border.

That didn’t last long, though.

The foster-parent calls receded and the abuse-related phone calls picked up in volume and intensity, according to Deacon Bernie Nojadera, executive director of the Secretariat for the Protection of Children and Young People at the U.S. Conference of Catholic Bishops.

Deacon Nojadera said he doesn’t know exactly why people call his office. He suggested it may be that callers expect that the office can issue reprimands to any suspected cleric: “What are you going to do about it?”

But that’s not the case, he told Catholic News Service in an Aug. 13 interview. Priests accused of abuse are subject to the discipline of their diocesan bishop or religious superior; if found guilty of misconduct, priests may be laicized by the Vatican. Accused bishops, though, are subject first to the Vatican.

Parents who call sound worried, the deacon added: “How do I know my child’s going to be safe if he’s in formation or if he’s in seminary?”

The three most notable cases this summer involve Archbishop McCarrick, who is facing a credible allegation of abusing a minor and is believed to have harassed and abused seminarians even after they were ordained to the priesthood; the Diocese of Lincoln, Nebraska, where a vocations director who died in 2008 has recently been accused of harassment; and the Archdiocese of Boston, where Cardinal Sean P. O’Malley ordered an investigation of the archdiocesan seminary after abuse reports surfaced in early August.

“Our first job is to listen, to be empathetic,” Deacon Nojadera said. Some of the callers, he acknowledged, are angry. “Well, I’m angry, too,” he told CNS. Without prayer, he added, “I can’t do what I’m doing,”

“In 2002, we were responding to a very specific situation: the abuse of children by priests,” Deacon Nojadera said. “I still hold it’s a very good document. It’s better than nothing. It has its strengths, it has its weaknesses.” He added, “We need to have a very serous discussion on what we can do to improve what’s mandated by the charter.”

The charter, amended in 2011 and again earlier this year. did not take into account the possibility that bishops could be abusers, or that abuse victims could be adults, much less seminarians and priests whose path to — and following — ordination could be stymied by bishop-abusers.

The increased call volume experienced by Deacon Nojadera and his staff has not been experienced in two dioceses contacted by CNS.

“We’ve all spent time processing among staff and clergy, because this is another level of concern and another level of distress for all Catholics,” said Beth Heidt Kozisek, victim assistance coordinator for the Diocese of Grand Island, Nebraska, in a phone interview with CNS. “But we really haven’t had an increase in the number of calls from parishioners or general members of the community.”

The allegations against Archbishop McCarrick, a former cardinal, weren’t published in either the Omaha World-Herald, Nebraska’s largest newspaper, or the local daily, The Grand Island Independent, Kozisek said. “I found it online but I didn’t see any comments online,” she added. “Is that a sign of our rural culture — nobody’s reading the news? They’re busy farming and other activities?”

“Baton Rouge has not experienced an increase in allegations or calls in the last month due to the Cardinal McCarrick story,” said an email to CNS from Amy Cordon, victim assistance coordinator for the Diocese of Baton Rouge, Louisiana.

“My colleagues and I do not see our ministry to victims of clergy abuse as a job. We are ministers,” Cordon said of herself and her fellow victim assistance coordinators. “And our boss, Jesus Christ, never disappoints.

“This is why you are not seeing a mass exodus of victim assistance coordinators when these stories continue to break 10-plus years after the charter was written,” she added. “Most of us work under truly holy men of God and are very fortunate to have good bishops who care for those who have been harmed. I can certainly say that is the case in Baton Rouge.”

Deacon Nojadera recalled the instance of one caller, who had worked with the resigned cardinal, first weeping with anguish over the phone and then voicing anger over the situation. “First, I have to listen,” he said.

But the moment, he said, may signify the need for “a spiritual cleansing in the church.”

NEXT: Cardinal DiNardo lays out plan to address ‘moral catastrophe’ of abuse