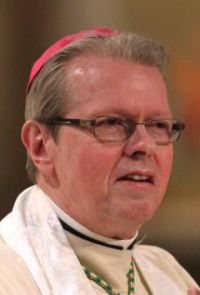 Bishop Edward B. Scharfenberger is pictured in a 2015 photo in Washington. (CNS photo/Bob Roller)

UPDATED – WASHINGTON (CNS) — U.S. Catholic church leaders have been calling for an internal investigation into the handling of allegations of abuse and sexual misconduct against Archbishop Theodore E. McCarrick and urging such an inquiry be spearheaded by laypeople.

“I think we have reached a point where bishops alone investigating bishops is not the answer. To have credibility, a panel would have to be separated from any source of power whose trustworthiness might potentially be compromised,” said Bishop Edward B. Scharfenberger of Albany, New York.

In an Aug. 6 statement, the bishop said he was “heartened by my brother bishops proposing ways for our church to take action in light of recent revelations” and he agreed “a national panel should be commissioned, duly approved by the Holy See.”

But the bishop said laypeople had a crucial role to play in this work, noting that they are “not only willing to take on this much-needed role, but they are eager to help us make lasting reforms that will restore a level of trust that has been shattered yet again.”

“In speaking with them, ” he said, “we all hear their passion for our universal church, their devotion to the Gospel of Jesus Christ, and their hunger for the truth. They are essential to the solution we seek.”

Bishop Scharfenberger said what is currently needed is “an independent commission led by well-respected, faithful lay leaders who are beyond reproach, people whose role on such a panel will not serve to benefit them financially, politically or personally. These will be people with a deep understanding of the Catholic faith, but without an axe to grind or an agenda to push. It will not be easy, but it will be worth every ounce of effort, energy and candor we can muster.”

He stressed that U.S. bishops must “get this right” and he said he is confident they can “find a way to look outside ourselves, to put this in the hands of the Holy Spirit, and to entrust our very capable laypeople, who have stood with us through very difficult times, to help us do the right thing.”

“We need an investigation — the scope of which is not yet defined but must be defined — and it must be timely, transparent and credible,” he added.

Similarly, Cardinal Blase J. Cupich of Chicago, former head of the U.S. bishops’ committee on child and youth protection, said in an interview with America magazine that he supports an investigation into the handling of allegations of abuse and sexual misconduct against Archbishop McCarrick that includes laypeople.

The cardinal told the Jesuit magazine he was shocked to learn about Archbishop McCarrick’s double life and would support “a full inquiry” into why those settlements against him were not disclosed.

“We have to find out exactly what took place, especially with regard to the adult misbehavior that was alleged,” he said, adding that if dioceses lack policies on how to deal with allegations of misbehavior involving adults, then “we need to correct that.”

Washington Cardinal Donald W. Wuerl told the National Catholic Reporter Aug. 5 that the U.S. Conference of Catholic Bishops should create a new panel to receive and evaluate any allegations or rumors of sexual misconduct by a member bishop, adding that the Vatican could designate one of its offices to act on the proposed panel’s findings.

“It seems to me that’s one possibility, that there would be some way for the bishops, and that would mean working through our conference … to be able to address the question of sustained rumors,” he told the independent, lay-owned biweekly newspaper.

He said the proposed panel of bishops might turn any findings it makes on an accused bishop to the apostolic nuncio, who could pass these findings on to a Vatican office.

“We don’t pass judgment,” Cardinal Wuerl told NCR. “That has to go to Rome. So, it seems to me there has to be some mechanism in the Congregation of the Doctrine of the Faith or in the Congregation for Bishops to evaluate any concern that a conference of bishops might have about one of its members.”

He said his idea of a new panel was in response to the Aug. 1 statement by Cardinal Daniel N. DiNardo of Galveston-Houston, USCCB president, that said the bishops’ conference would discuss at its annual fall meeting “the right course of action” in wake of revelations of Archbishop McCarrick’s abuse.

Cardinal Wuerl said bishops need to be ready for this meeting with work already done and ideas in place.

Cardinal Cupich similarly urged bishops to be ready to discuss this issue at their November meeting.

He told America magazine that Catholics should ask their bishops to explain the policies in place to protect both children and adults from harassment and abuse.

If church leaders “need help in that nationally, then we need to do something,” he said, adding: “Let’s roll up our sleeves when we get together in November and do it.”

Bishop W. Shawn McKnight of Jefferson City, Missouri, also mentioned the bishops’ fall meeting, saying in an Aug. 6 statement that when the bishops convene they will “consider ways to embrace spiritual renewal and to rebuild trust.”

“I pledge to do everything I can to make the process of handling the accusations of bishops more transparent and effective,” he added.

He thanked diocesan Catholics for warmly welcoming him to the diocese last November which he said “contrasts sharply with the sting of the recent reports of scandal regarding Archbishop Theodore McCarrick and the silence of so many bishops who knew about him.”

“It is almost unbearable,” he said of the allegations and lack of church response, noting: “How could a brother bishop disrespect with such callousness the dignity of young boys, seminarians and priests over decades and no one called him on the carpet?”

“It is inexplicable to me. This cannot continue, and I hope with God’s grace there will be a change of culture among the clergy,” he said.

Bishop Edward J. Weisenburger of Tucson, Arizona, similarly called for further action, saying in an Aug. 1 statement that it is important for the USCCB to review the bishops’ “Charter for the Protection of Children and Young People” to address clergy abuse.

“The charter needs to ensure that procedures and practices are in place to hold clergy, employees, volunteers, and bishops to the same level of accountability,” he said.

“In addition to adhering to the Dallas charter, we bishops can and must enter more deeply into a life of prayer and penance,” said Bishop William A. Wack of Pensacola-Tallahassee, Florida.

“All of us have sinned; all of us are in need of God’s mercy,” he said of the bishops, noting that “acts of penance on behalf of individuals can help to heal the body as a whole.”

Along with further prayer, fasting and spiritual direction, he said the bishops also should make efforts to be “more inclusive of laypeople in our decision-making and in our social lives as well in order to break some of the unnecessary bonds of secrecy and privilege.”

Bishops should “welcome friendships with people outside the episcopacy and priesthood,” he wrote in a letter to diocesan Catholics, adding that it has been a blessing for him to get to know families in parishes and the diocese and share with them his own struggles and concerns.

NEXT: HHS urged to reissue rules to enforce required notice on abortion coverage