Church that remains in nearly condemned town a gift from God, says pastor 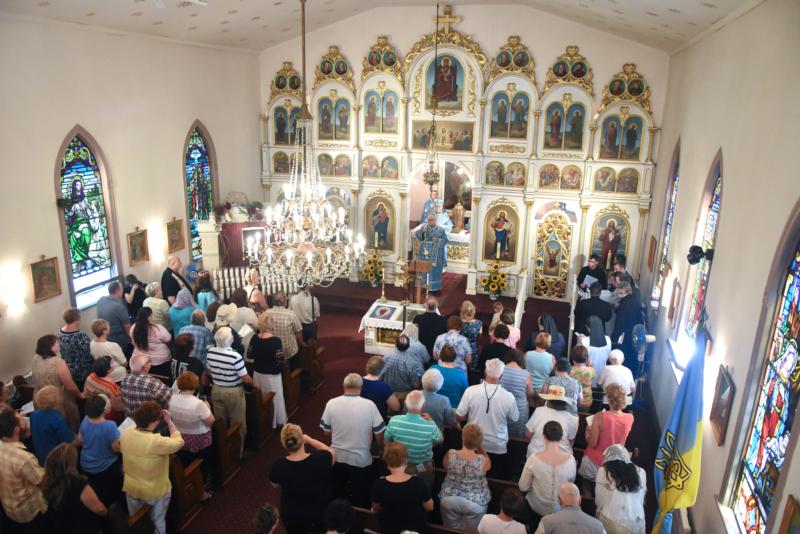 Worshippers attend a Divine Liturgy in 2016 at Assumption of the Blessed Virgin Mary Ukrainian Catholic Church in Centralia, Pa. This year “A Call of Prayer Marian Pilgrimage,” led by four bishops, will take place Aug. 26 at the church in the desolate coal town of Centralia. (CNS photo/Jacqueline Dormer, Republican-Herald)

The church sits on a hill to the north of the town, which has been almost entirely condemned as a result of underground mine fires that have undermined the stability of the ground.

“We are, quite simply, hoping to manifest and make real the major archbishop’s vision of providing a place for prayer,” said Father Michael Hutsko, an archpriest who is pastor of the church.

Father Hutsko said that the presence of the church itself is a gift from God.

“Logic says that there’s no reason for the church to be there. But the spirit of prayer and the presence of God manifest themselves there,” he said in a phone interview with Catholic News Service.

He also said that being the pastor at such a church is a unique experience. “The people’s attendance is a visible manifestation of their support.”

Congregants still drive to the hilltop from the surrounding communities to attend liturgies on Sundays and holy days. Father Hutsko said that average attendance was around 50 people, almost all of whom are former residents of Centralia.

On the day of the pilgrimage, the celebrants of the Divine Liturgy at the church will be Bishop Andriy Rabiy, apostolic administrator of the Ukrainian Catholic Archeparchy of Philadelphia, and Auxiliary Bishop John Bura of the archeparchy; Bishop Ronald W. Gainer of the Latin-rite Diocese of Harrisburg, Pennsylvania; and Bishop Kurt Burnette of the Ruthenian Byzantine Catholic Eparchy of Passaic, New Jersey.

The choir of the Ukrainian Catholic National Shrine of the Holy Family in Washington will sing at the Divine Liturgy and the other services.

Pilgrims also will participate in a living rosary, sing the traditional Akathist hymn to Mary, the mother of God, and process to the church for the celebration of a “moleben,” which is a service asking for the mother of God’s intercession.

The church, which held its first services in 1912, is white with three onion-shaped blue domes. During a 2015 visit, now-retired Archbishop Stefan Soroka of the Ukrainian Catholic Archeparchy of Philadelphia, expressed his amazement that the church continued to exist in Centralia and said that he felt a desire for all people to come and experience the holy nature of the place.

At the centennial of the church’s founding, Archbishop Soroka said: “This church is standing after 100 years, despite the mine fire and the town leaving, to deliver a message to the world: ‘We are to be like your namesake, the mother of God, to be servants to others.'”

Father Hutsko described the message of the church and the pilgrimage this way: “Our church sits on the side of a mountain, surrounded by forest. What the physical presence of the church standing above a man-made natural disaster which forced everyone to evacuate shows is that God will never abandon us.”