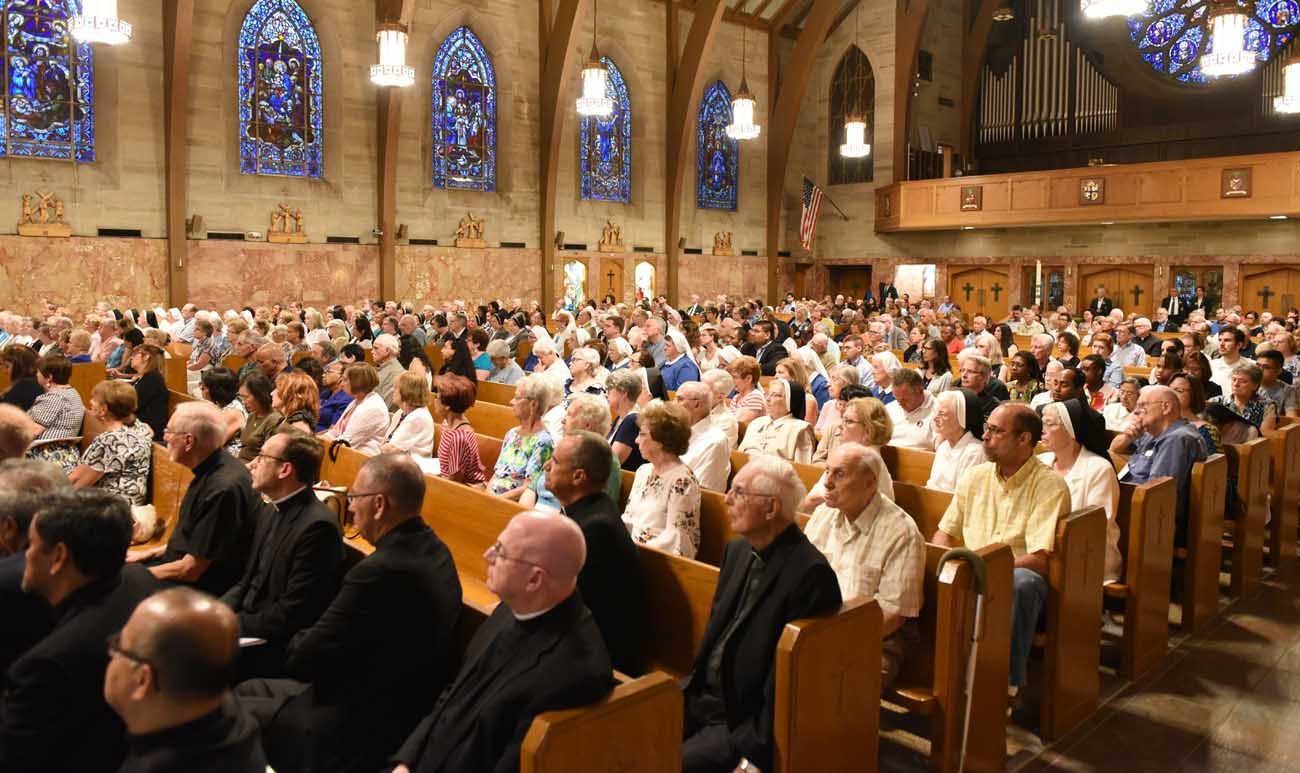 METUCHEN, N.J. (CNS) — Standing before hundreds of laypeople, clergy, deacons and women religious of the Diocese of Metuchen, Bishop James F. Checchio made them a promise.

“Today, I pledge anew to use all my energy, all the grace God gives me, to be a source of healing and reconciliation, to be a source of hope. To do this I know is not simply words, but commitment to the right course of action,” Bishop Checchio said during a holy hour for healing, truth and hope at the Cathedral of St. Francis of Assisi Aug. 29.

“We cannot rest until we right this wrong,” he said.

Scheduled to respond to a Pennsylvania grand jury report that hundreds of priests were accused of the sexual abuse of children and seminarians, the prayer service drew people from throughout the diocese for exposition of the Blessed Sacrament, prayer, song and reflection.

In a homily, Bishop Checchio recalled the words of St. Augustine upon being named bishop of Hippo in Africa: “What I am for you, a bishop, causes me to tremble; what I am with you, a Christian, gives me comfort.”

“Your presence here gives me great hope,” the bishop told the assembly, “but as your bishop, like St. Augustine, I am trembling too, at the thoughts of what all these serious violations mean for our life in our church.

“When we hear of such abuse, particularly those of children, our hearts ache for the pain so many have suffered at the hands of those who were entrusted with their spiritual care and rippling damaging effects on their loved ones,” he continued. “It is a painful and horrific chapter in our history that must never be repeated.”

Bishop Checchio admitted he was “deeply saddened and ashamed” when he learned Archbishop Theodore E. McCarrick had been accused of the sexual abuse of seminarians in the diocese while acting as the diocese’s first bishop from 1982 to 1986.

“I can’t tell you all often enough how deeply saddened and ashamed I have been to hear accounts that one of my predecessors allegedly used his authority over seminarians and young priests for his own advantage and lustful desires, affronting their human dignity,” the bishop said. “It angers me, too, that the trust of these young men, who came to the church to follow their vocation to the sacred priesthood of Jesus Christ, was violated. … Making matters even worse is that some knew about this, but did not properly face it, refused to face it or simply hoped it would go away.

“I am moved to ask for forgiveness of you for these terrible sins and crimes of commission and omission, (and) I am equally committed to promoting a healthy, wholesome presbyterate,” he said. “I feel inspired in my life to enter more deeply into a life of repentance for these sins and for our church. I encourage each of you to enter that pathway too.”

Bishop Checchio concluded by asking the assembly to pray for those who have been abused. “If it is the only prayer you are able to offer, let it be for them,” he said.

Parishioners at a suburban Chicago parish also prayed during a penance service for clergy abuse earlier in August.

More than 40 people joined the parish priests at Our Lady of the Brook Parish in Northbrook, for a somber service praying for abuse victims, abusers and the church.

Wearing purple stoles symbolizing penance, Father Robert Heinz, pastor, and Father Dan Folwaczny, parochial vicar, laid prostrate before the altar at the beginning of the service, in a gesture of sorrow, repentance and surrender to God.

At the end of the service, the two were joined by Father Brad Zamora, who was cantor for the service, and Deacon Michael Lewis, a seminarian studying at Mundelein University, in kneeling before the congregation while the people sprinkled ashes on their heads.

“It just came to me from so many examples in Scripture where we talk about how we pray and we fast and we put on our sackcloth and our ashes,” Father Folwaczny said afterward. “We just decided we had to talk about it because not talking about it isn’t doing anybody any good.”

During his homily, Father Folwaczny questioned how an abuser could stand up on the day of his ordination and make promises to God and “not feel the gravity and sacredness of his charge.”

God will not be mocked in this way and demands purification and repentance for sins, which is where prayer and fasting enters in, he said, adding that he refuses to give up hope.

“I cannot leave behind the priesthood that I know he has called me to,” he said. “I cannot abandon the people that he has asked me to feed with his body and blood.”

Mariana Hernandez attended the service at the invitation of a friend and said it is important for laypeople to respond.

“As part of the church we have to take responsibility and pray,” she said.

NEXT: Cardinal Wuerl’s letter to priests expresses ‘anguish’ for suffering