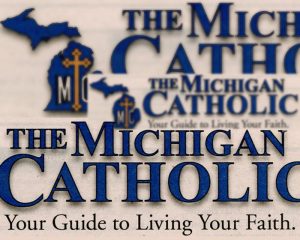 The Michigan Catholic masthead is seen in this photo illustration. (CNS illustration/Tyler Orsburn)

DETROIT (CNS) — The Michigan Catholic, newspaper of the Archdiocese of Detroit, will publish its last issue Aug. 24. Taking its place in November will be an online-only news service called Detroit Catholic.

The archdiocese, in announcing the newspaper’s closure Aug. 1, said it will introduce what it called a “multichannel” service early next year that will include mailed publications focusing on evangelization and faith formation.

The Michigan Catholic, founded 146 years ago when the then-Detroit Diocese’s territory covered the entire Lower Peninsula of Michigan, was the second-oldest newspaper in the state, behind only the Detroit Free Press, which is the highest-circulation paper in Michigan.

By comparison, The Michigan Catholic — which had paid circulation in the 30,000s in the mid-1980s and at one time owned its own printing plant — had a print run of 26,000 this year, of which only 6,000 were paid subscribers, according to archdiocesan spokeswoman Holly Fournier.

The newspaper, which once was self-sustaining, required operating subsidies in the 1990s. During a restructuring of archdiocesan operations in 2009, the archdiocese said the subsidy for The Michigan Catholic would end, but Fournier told Catholic News Service Aug. 3 that while the subsidy may have been cut, it never ended, and was in fact rising in recent years.

The paper switched from weekly to biweekly publication in 2010.

Despite The Michigan Catholic’s finances, its closure was not “about cost savings, it’s about reinvesting the resources that we have into enhanced and expanded news coverage,” Fournier said. Print, she added, “costs a lot of money. Take that money and invest it in something that will reach more people. This directive comes straight from the archbishop,” Allen H. Vigneron, whose 2017 pastoral letter “Unleash the Gospel” included instructions to all segments of the archdiocese on how to make evangelization the top priority.

His instructions to the archdiocesan communications department was to “reach everyone who is engaged with and seeking engagement with the church.”

“It became clear we really couldn’t do that with the paper right now,” Fournier told CNS. “We needed to be able to take the paper, close it and reinvest those resources. So, it’s a financial decision but not really a cost-saving decision.”

There is no clear word as to whether the shift will result in job losses. The archdiocese is in negotiations with the Detroit local of the NewsGuild-CWA, which represents workers at the newspaper, over the effects of the closure.

Detroit Catholic will be free and “continue providing the award-winning news and feature stories Michigan Catholic readers expect. This transition will allow us to enhance coverage about our parishes, schools and the many life-giving ministries in the archdiocese,” Archbishop Vigneron said in an Aug. 1 letter to Catholics in the archdiocese.

“This digital transformation will enable us to post more local news and share national and global articles about the church throughout the week. Readers will have the option to subscribe to free daily, weekly or monthly news summaries delivered via email.”

“Detroit Catholic will focus on serving highly engaged Catholics, clergy and lay leaders. We believe the new digital news service and website will serve these active disciples who want timely, local Catholic news, as well as current national and international stories about the church,” said Edmundo Reyes, archdiocesan director of communications, in an Aug. 1 statement.

Fournier said both she and Reyes, who started in his post May 17, were part of the transition effort, which had been worked on over “several months.”

“We understand the magnitude of closing a publication that has been part of the Catholic landscape in southeast Michigan for so many years,” Michigan Catholic managing editor Mike Stechschulte said in an Aug. 1 statement. “The Michigan Catholic is the second-oldest newspaper in the state of Michigan, and with that rich history comes a proud heritage of Catholic journalism in our state. The newspaper’s most recent national awards from the Catholic Press Association further demonstrate a commitment to excellence that we don’t take lightly.”

Stechschulte added, “The Lord has done great things in and through this publication, and we trust he will do greater things still.”

NEXT: Historian says faith lived in Dachau section set aside for clergy