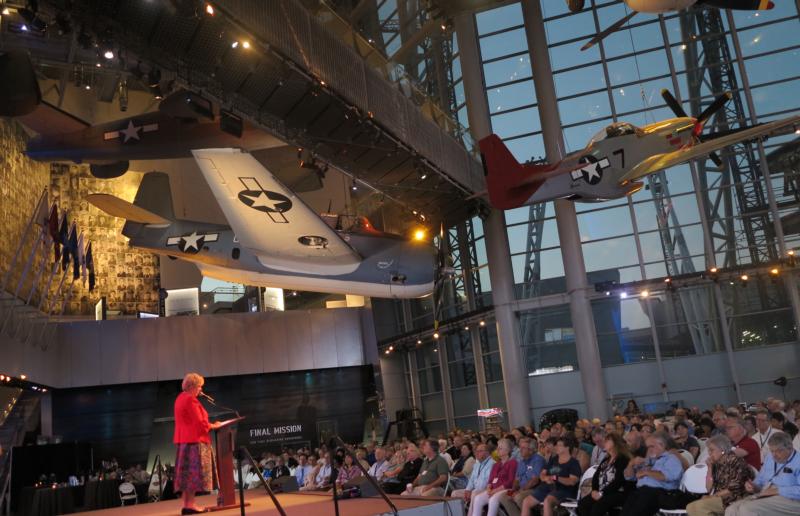 NEW ORLEANS (CNS) — Dachau, the notorious German concentration camp most associated with the genocide of thousands of Jews during World War II, also held more than 2,700 clergy — 2,400 of them Catholic priests.

Amid the horrors of hunger, torture, medical experimentation and mass executions, faith and hope somehow managed to flicker — and often flourish — in this section of Dachau: Cell Block 26.

One Catholic deacon was even ordained to the priesthood while in captivity, all while escaping detection.

“It was the largest religious community living together in the history of the Catholic Church,” said Dianne Traflet, an assistant professor of pastoral theology and the associate dean of graduate studies at Seton Hall University in South Orange, New Jersey, addressing permanent deacons and their families at the 2018 National Diaconate Conference in New Orleans in late July.

“These were priests who lived their faith and their vocations with heartbreaking focus and love and who were determined to build the body of Christ,” Traflet said of the camp’s Catholic clergy, who hailed from 144 dioceses and 25 countries and were about a third of Dachau’s total population.

In a makeshift chapel set up in their cramped barracks, 400 priests at a time could be heard chanting in Latin: “Christus vincit! Christ regnat! Christus imperat!” (“Christ conquers! Christ reigns! Christ commands!”)

“Men worshipped God in the very heart of this demonically distorted world. Christ was in the camps,” said Traflet, quoting Father Otto Pies, a Jesuit priest who survived Dachau.

“It was the church in chains, restricted and hemmed in, spied upon and threatened, ” Father Otto said. Traflet recounted the story of Blessed Titus Brandsma, a Dutch Carmelite friar sent to Dachau in 1942 for treason.

“His crime? He emphatically urged editors of the Dutch Catholic press to violate a new law of the Third Reich and not print any Nazi propaganda,” Traflet said. The priest denounced Nazism as “a sewer of falsehood that must not be tolerated.”

Facing death by lethal injection in July 1942, Father Titus assured the nurse charged with administering the procedure of her goodness as one of God’s children. He gave her his rosary beads and encouraged her to pray. The priest’s example of love, forgiveness and human dignity led the nurse to return to her Catholic faith after the war, Traflet said.

From Cell Bock 26, Dachau’s priests held theological conversations, Bible studies, conducted baptisms, heard confessions and wrote a multi-lingual dictionary of basic phrases so they could comfort the sick and dying in their native tongues. They would also talk and pray about how to help the church, wracked by the loss of so many clergy.

“They said there are images of ‘Christ the King’ and ‘Christ the Priest,’ but we also need an image of ‘Christ the Servant,'” Traflet noted of those discourses, some of them preserved by Dachau escapee Wilhelm Schamoni in his 1953 book “Married Men as Ordained Deacons.”

Dachau’s priests started thinking of the restoration of the permanent diaconate — something that wouldn’t formally happen until 1968 — as a means of multiplying the numbers of ordained men who could bring comfort and news of salvation to the afflicted in this era of priestly attrition.

Moreover, married men could more easily fly under the radar while doing their work in mission countries and in times of religious persecution, whereas priests were more visible targets of hatred because of their more public lives and manner of dress.

Traflet told the story of a German transitional deacon named Karl Leisner, who at the time of his arrest was awaiting his priestly ordination and suffering from tuberculosis. Deacon Leisner’s six years of detention were spent primarily at Dachau where he was ordained a priest Dec. 17, 1944.

Pulling off this feat took months of preparation, Traflet said. Vestments were smuggled into Dachau, along with the required authorization papers from his bishop and the Vatican. French Bishop Gabriel Piguet, also interned at Dachau, conferred the sacrament using secretly attained chrism oil. A choir was formed to celebrate the ordination Mass and no Nazi officials found out about any of this.

“Can you just imagine the immeasurable and ineffable joy that his brought to Karl Leisner –not just to him, but to the priest-prisoners, to the campus and, ultimately, to the church?” Traflet said, asking the deacons in the audience to recall their own ordination day and the sight of the happy congregants celebrating with them.

Father Leisner celebrated his first and only Mass at Dachau Dec. 26, 1944, on the feast of St. Stephen, the patron of deacons. Although he lived to see the liberation of Dachau in late April 1945, he died of tuberculosis three months later in a German hospital. He was beatified in 1996 by St. John Paul II, inside the Berlin stadium built by Adolf Hitler to showcase his Olympic athletes.

“God continues to call us from darkness to light. Let God’s light shine out in your smiles, in your optimism, and in your hope,” Traflet said, urging the assembled deacons to remember how much Dachau’s priests cherished the Eucharist.

“When you process with consecrated hosts in church or bring the Eucharist to those who are suffering, understand just how powerful the sacrament of love is,” Traflet said. “May your pilgrimage with the blessed sacrament be privileged moments of grace for those you meet and for you, too.”

Donze is a staff writer and editor of Kids’ Clarion at the Clarion Herald, newspaper of the Archdiocese of New Orleans.