Gainer: Names of former Harrisburg bishops will be removed from buildings 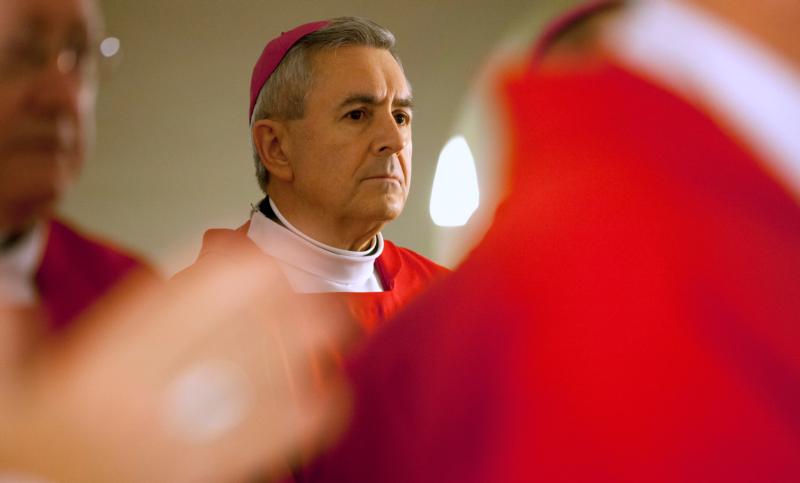 Bishop Ronald W. Gainer of Harrisburg, Pa., released information Aug. 1 from the diocese’s own internal investigation on child sex abuse, including a list of the names of 71 clergy, both dead and alive, accused of abuse. Bishop Gainer is pictured in a 2012 photo at the Vatican. (CNS photo/Robert Duncan)

UPDATED – HARRISBURG, Pa. (CNS) — Harrisburg Bishop Ronald W. Gainer Aug. 1 released information from the diocese’s own internal investigation on child sex abuse, including a list of the names of 71 clergy, both dead and alive, accused of abuse.

He also ordered removal from buildings, halls and rooms the names of former diocesan bishops going back to 1947.

The name ban extends to anyone who appears on the diocese’s list and has been accused of sexual misconduct, and also to any position of honor in the diocese given those named.

“It is my most unwelcome, yet necessary, duty to visit a sorry chapter of the Diocese of Harrisburg’s history, the one concerning the sexual abuse of minors,” Bishop Gainer said in an open letter.

“As has been the subject of much public discussion,” he continued, “the diocese has unfortunately at times been the home of men originally called to the service of God who, for reasons unknown and unfathomable, instead ignored that summons and turned to the pursuit of heinous personal ends.”

“That conduct has left a legacy of pain and sorrow that is still being felt,” Bishop Gainer said. “On behalf of the Diocese of Harrisburg, I apologize for these actions.”

While these harms of the past “cannot be undone,” he said, “it is my hope that today I can do my part as the present chief shepherd of the diocese to salve some of these historic wounds with the healing touch of transparency.”

To that end, he released a detailed list giving the names of 71 clergy and seminarians credibly accused of abuse, with a description of the alleged abuse, ranging from indecent behavior to inappropriate “communication with children.” As he said, the information is not an assessment of guilt but provides historic details of the accusations.

Among those named are vowed religious who served in the diocese and diocesan priests accused of misconduct in another diocese.

As a result of a review of historical cases, conducted by professional investigators and outside counsel, “it was also clear that the leadership of the church did not in every case take adequate measures when handling matters related to offending clerics,” a diocesan statement said.

The bishop’s release of pages of detailed information — which is being called unprecedented — comes ahead of the expected release of a redacted version of a grand jury report based on a months-long investigation by the state’s attorney general into sexual abuse claims in six Pennsylvania dioceses. Many of the claims go back decades.

Besides Harrisburg, the dioceses are Pittsburgh, Allentown, Scranton, Erie and Greensburg.

The Pennsylvania Supreme Court ruled July 27 the redacted report should be released. In June, the court had put a hold on the full report being released because it said it needed to review challenges filed by “many individuals” named in the report.

“A number of the petitioners asserted that they were not aware of, or allowed to appear at, the proceedings before the grand jury,” the court said in its earlier opinion.

In its new ruling, the court said the report will be edited to protect the identities of those challenging its release and the redacted version can be made available to the public as early as Aug. 8 and no later than Aug. 14.

“While this list cannot undo what which has been done, it is my sincere hope that it can in some way bring relief to those who have unfortunately been harmed throughout our history,” Bishop Gainer said.

“In the meantime, the diocese will remain steadfast in its efforts to ensure that this chapter never repeats. I also recommit myself, my staff, all clergy, and every man and woman associated with the diocese to eradicate abuse in our midst.”

The diocese had intended on releasing its list of accused abusers nearly two years ago, but the state attorney general’s office had asked the diocese to not do so to protect its own investigation.

“The survivors can feel free to tell their stories to whomever and whenever they wish,” Bishop Gainer said. “I hope that this step will further aid those survivors, and perhaps others, in their path to healing.”

NEXT: DiNardo: Church must address its leaders’ ‘moral failures of judgment’