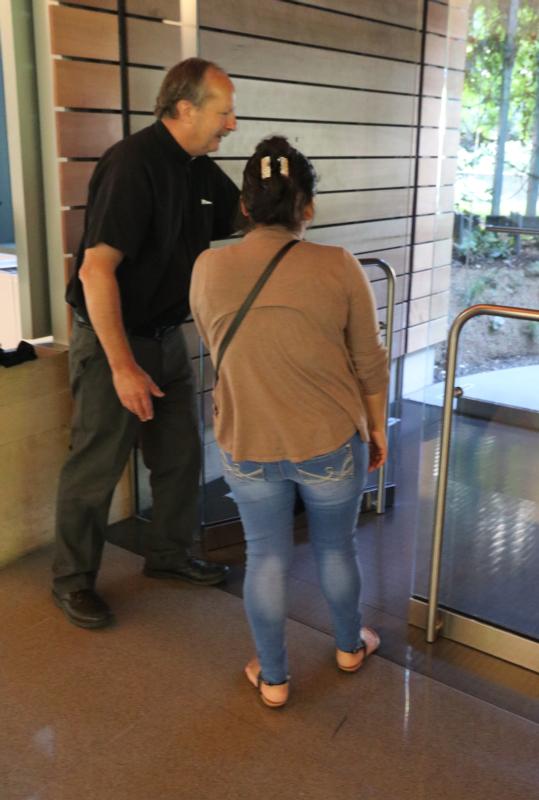 Father Dave Zegar, pastor of St. Andrew Parish in Portland, Ore., holds the door at the Portland Immigration Court June 20 for a parishioner who is an asylum-seeker. The woman, a mother of four, fled violence in Mexico two years ago. (CNS photo/Katie Scott, Catholic Sentinel)

PORTLAND, Ore. (CNS) — One night in a small town in Mexico, armed men arrived at Maria’s house. Pregnant and with her young daughter asleep in the next room, she wasn’t sure if she should rush to get her 2-year-old or run for her life.

An “armed man started yelling at me,” she said in an asylum application. “Another man of the group yelled to the first man not to kill me because I was pregnant.”

The men left, but the traumas did not. Two years later, in 2013, a truck pulled up next to a church in her town and dumped corpses onto the street. “We all felt panic-stricken,” said Maria told the Catholic Sentinel, newspaper of the Portland Archdiocese. (The paper withheld her legal name for her protection.)

Now the mother of four, Maria fled to the U.S. with her children in 2016 hoping to gain asylum. Her children range in age from 7 to 14.

In an early June move that could block tens of thousands of people, especially women, from seeking refuge in the United States, U.S. Attorney General Jeff Sessions ordered immigration judges to stop granting asylum to most victims of domestic abuse and gang violence.

It will also make it tougher for individuals such as Maria to win asylum cases already in progress, said Father Dave Zegar, pastor of St. Andrew Parish in Northeast Portland where Maria attends Mass.

Prior to the ruling, Maria’s case, which is “a common example of someone seeking asylum here,” was “possibly winnable,” he said.

Despite the new hurdles, members of St. Andrew have stepped in to help Maria.

Father Zegar, who has long been involved in immigration work, and several parishioners came to the Portland Immigration Court June 20 to offer a supportive presence while the 36-year-old mother presented her case before a judge. Since crossing the border and being detained for one month, Maria has checked in with the court regularly and followed the legal protocol for asylum seekers.

St. Andrew parishioner Rafael Bobenrieth translated her most recent asylum application for the judge. Other St. Andrew community members helped fill out paperwork for guardianship, so someone could legally care for her children if Maria were taken into custody.

Sitting inside the immigration court, Maria said in Spanish that she came to the United States because she wanted to send her children to school and “know that they would come back OK.”

During her initial detention, she was housed with her children. “I could not imagine having them taken away; I’m so grateful,” she said, thinking about recent family separations.

Maria’s decision to leave Mexico goes back to 2010, when her family became victims of violent threats.

She writes in her asylum application that her father received an anonymous letter demanding nearly $100,000. “The consequence (of not paying) would be harm to someone in the family. We couldn’t pay because it was too much money.”

Maria moved to a different town but returned when her brother-in-law, a well-respected community member involved in local politics, intervened.

Shortly thereafter, while her brother-in-law was cutting wood in his front yard, “some men came, attacked him and killed him,” writes Maria.

In 2017, there were almost 30,000 murders in Mexico, according to the nation’s interior ministry. Many of the deaths are gang-related.

Maria believes the threats to her family still exist. “They killed my brother-in-law and they would do the same to us,” she said in her statement. “They would harm me and my kids.”

Maria said her family prays the rosary daily and her faith helps with the fear and sadness.

In the courthouse lobby after seeing the judge, Maria looked relieved. The judge allowed her to stay longer in the U.S. and asked for more proof of the violence she had witnessed. He gave her several months to prepare.

Tracking down such evidence is tough and time-consuming and one of the many reasons asylum cases are so difficult, according to Purce.

Since the court date, Maria has shared with Father Zegar details of her story that she initially was afraid to disclose out of fear of retaliatory violence if she is deported to Mexico.

The priest believes her case now is stronger and is trying to secure an attorney.

“But even if we can’t win the case, we feel deeply for her as a mother and want to show her support and help where we can,” he said, adding that the church has long defended the right of families to migrate for safety.

“Why would anyone leave their family, their church, their home, everyone they ever knew unless they had no choice?” said St. Andrew parishioner Ann Anderson, who came to the courthouse with her husband, Peter, to support Maria.

Involved in reaching out to immigrants for years, St. Andrew calls itself a sanctuary parish. “Sanctuary is defined by the parish broadly, as all forms of support and accompaniment,” said Peter Anderson. “These are terrifying times and we have to stick together.”

The parish has helped “in so many ways,” said Maria, her face filled with emotion. “I’m so very grateful.”

PREVIOUS: Brief filed with Supreme Court to try to save cross-shaped war memorial

NEXT: Gainer: Names of former Harrisburg bishops will be removed from buildings