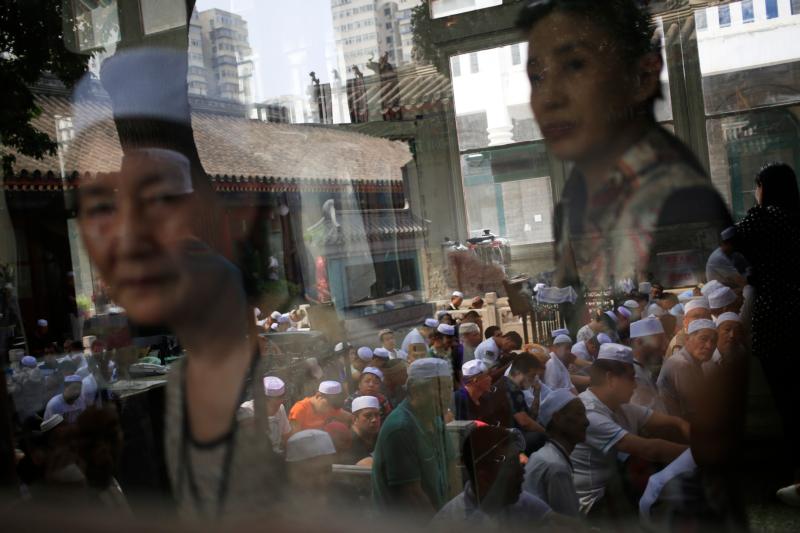 In this 2016 file photo, muslim men preparing for prayer are reflected in a glass window as women look on at the Niujie Mosque during celebrations for Eid al-Fitr in Beijing, China. The U.S. International Commission on Religious Freedom singled out 28 countries for their repression of religious liberty in its annual report, issued Aug. 29. (CNS photo/How Hwee Young, EPA)

WASHINGTON (CNS) — The U.S. International Commission on Religious Freedom singled out 28 countries for their repression of religious liberty in its annual report, issued Aug. 29.

A Tier 1 country, the report said, is “any country whose government engages in or tolerates particularly severe religious freedom violations, meaning those that are systematic, ongoing, and egregious. The State Dept. most recently made CPC (country of particular concern) designations in December 2017.”

Another 12 were listed as Tier 2 countries: Afghanistan, Azerbaijan, Bahrain, Cuba, Egypt, India, Indonesia, Iraq, Kazakhstan, Laos, Malaysia and Turkey. Tier 2 is defined by USCIRF as “nations in which the violations engaged in or tolerated by the government during 2017 are serious and characterized by at least one of the elements of the ‘systematic, ongoing and egregious’ CPC standard.”

These countries, USCIRF said, “represent the most pressing religious freedom concerns worldwide and the most promising avenues for addressing them through U.S. foreign policy.”

Among the policy options the report recommended for the U.S. government was to “press the country’s government to bring national laws and regulations, including registration requirements for religious communities, into compliance with international human rights standards” and to “press the country’s government to conduct professional and thorough investigations — and to prosecute perpetrators — of incidents of sectarian violence, terrorism, and other violations of religious freedom”

A third category, Entities of Particular Concern, was reserved for Islamic State, the Taliban in Afghanistan and Al-Shabaab in Somalia as non-state actors.

Myanmar, China, Iran and Sudan have been designated as countries of particular concern in every USCIRF report since its first in 1999. Then, there were just five countries and two regimes — the Taliban and Slobodan Milosevic’s fractured Yugoslavia — on the list.

In Myanmar, “Christians corroborated other reports received by USCIRF that Christians are often not allowed to worship in their homes,” the report said.

In China last year, it noted, “churches experienced increased restrictions and surveillance, including a campaign to install security cameras on church premises, primarily in Zhejiang province.”

In Iran, “the constitution recognizes only Christians, Jews, and Zoroastrians as protected religious minorities, free to perform their rites ‘within the limits of the law,'” the report said.

In Eritrea, “police also undertook door-to-door searches and arrested individuals identified as Pentecostal or evangelical solely for their religious identity,” it said.

“The imposition of Russia’s repressive laws has greatly curtailed religious freedom on the Crimean Peninsula,” which it annexed from Ukraine in 2014, it added. “Authorities remain deeply suspicious toward religious groups other than the Russian Orthodox Church.”

The commission’s report focused on three themes: advocacy for the release of specific prisoners, the use of blasphemy laws in place in at least 69 countries and which “should be repealed,” the report said, and women and religious freedom.

It also focused on seven “religious prisoners of conscience” in hopes of reducing the number worldwide of such prisoners and to highlight the conditions in each country that led to their imprisonment. One of the seven was the Rev. Andrew Brunson, who is still under house arrest in Turkey after having been jailed for nearly two years, and which has led to U.S. economic sanctions against turkey in retaliation for its refusal to free him.

“While religious freedom violations in many parts of the world continue to be grave, there are real reasons for optimism 20 years after the U.S. Congress’ landmark passage of IRFA,” the International Religious Freedom Act, the report said.

The report included seven recommendations for the Trump administration, and eight for Congress, to more fully advocate for religious freedom worldwide.

One recommendation for the administration was to “resettle vulnerable refugees, including those fleeing religious persecution, through the U.S. Refugee Admissions Program and address the longstanding flaws in the treatment of asylum-seekers in Expedited Removal that USCIRF has documented since 2005.” USCIRF issued a similar recommendation for Congress: “Exercise oversight of Expedited Removal and press for reforms to address concerns about the treatment of asylum-seekers in that process that USCIRF has identified since 2005.”

Jesuit Father Thomas Reese is a member of the U.S. Committee on International Religious Freedom. Since his confirmation Feb. 1, Sam Brownback, a Catholic who is at-large ambassador for international religious freedom, is an ex officio nonvoting member.

NEXT: Another study puts Puerto Rico’s Hurricane Maria deaths in the thousands