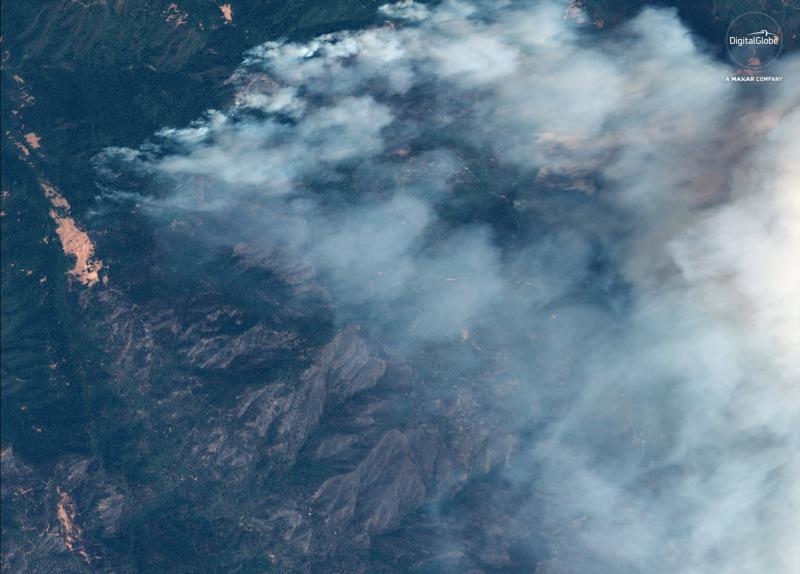 A satellite image shows the wildfire Aug. 6 at the Mendocino Complex in California. The wildfires in California are contributing to heavy smoke in southern Oregon, causing some parishes to move activities indoors and preventing some people from traveling to Mass. (CNS photo/DigitalGlobe, a Maxar company, handout via Reuters)

PORTLAND, Ore. (CNS) — Catholic churches and homes in southern Oregon are safe so far amid wildfires, but persistent smoke has suppressed activities — and spirits.

“It is horrible. It is absolutely grim,” said Ann Brophy, pastoral associate at Sacred Heart Church in Medford.

This is the fourth consecutive season of heavy smoke in the region. Brophy said this summer’s dose is the worst she has seen in her 30 years in Medford. “Children can’t go out and play,” she said.

Seniors have been intrepid about attending Mass at Sacred Heart, despite a dangerous and gloomy atmosphere for two months.

“They are trying to continue on with life,” Brophy said.

Like many in the region, Brophy has curtailed her daily walks and has a nagging cough. She notices few pedestrians, cyclists or dog walkers.

“It’s like a ghost town around here,” she said.

Blue skies emerge now and then. But since July, air flow has mostly covered the region with smoke from fires as close as Gold Hill and as far as British Columbia. Northern California blazes are contributing. Visibility often drops below a mile and on certain days, the region has some of the world’s worst air quality.

“It just keeps hanging in there,” said Debbie Todor, administrative assistant at St. Anne Parish in Grants Pass. “I have heard some people say they can’t get out because of smoke.” Plans for the Sept. 1 dedication of the new church in Grants Pass went ahead.

A fire in Gold Hill was miles away from St. Rita Retreat Center, but smoke has been “terrible,” said Father Stephen Fister, executive director of the retreat site. One group canceled a planned meditation retreat that would have brought people from all over the country.

Scratchy throats are common and some residents have discomfort in their chests as smoke particles cause inflammation in airways. Older people and children have been especially vulnerable.

Our Lady of the Mountain Parish in Ashland moved its summer picnic inside. Many outdoor performances of the town’s Oregon Shakespeare Festival have been relocated to a high school auditorium.

Mass attendance at Our Lady of the Mountain seems low, said Stephanie Hoffman, the business manager. “The smoke does get very tiresome,” Hoffman said.

“You go out to your car and there are ashes on the windshield,” she said. “People are just tired of it.”

Vacation Bible School at the parish drew 100 children, but they had to stay inside all week. “We had to be creative,” said Marks, who plans to hold the event before fire season next year.

Marks has noticed that elders are staying home more. Parish picnic attendance was down by half, and the fall festival may need to be postponed, depending on winds and air quality.

Throughout the region, prayers of the faithful often mention firefighters and those who have lost homes in northern California.