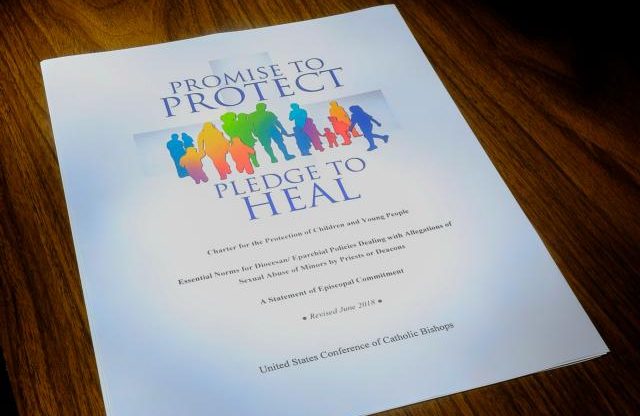 This is the cover of the USCCB “Charter for the Protection of Children and Young People.” (CNS photo illustration/Rick Musacchio, Tennessee Register)

WASHINGTON (CNS) — An independent lay-run board that would hold bishops accountable for their actions, a national day for Mass or prayers of reparation, and encouragement to parishioners to become more involved in their diocese are among steps suggested by prominent lay Catholics to right the U.S. church as it deals with a new clergy sexual abuse scandal.

Those contacted by Catholic News Service said that it was time for laypeople to boost their profile within the church and help begin to dismantle long-standing clericalism that has sought to preserve the reputation of offending clergy at the expense of the safety of children.

“Their credibility is gone and the trust of the faithful is gone,” Francesco Cesareo, chairman of the National Review Board, said of the U.S. bishops as they worked to develop steps to promote greater accountability on abuse.

The National Review Board, established by the bishops in 2002, oversees compliance by dioceses with the “Charter for the Protection of Children and Young People.” It has no role in oversight of bishops.

“The bishops have to put their trust in lay leadership and allow that lay leadership to develop the processes and oversight when these kinds of allegations occur, particularly holding bishops accountable,” Cesareo said.

In a presentation at the U.S. Conference of Catholic Bishops’ spring general assembly in June in Fort Lauderdale, Florida, Cesareo cautioned the prelates against complacency in meeting the charter’s requirements. He said that auditors preparing the 2016-2017 annual report on the charter’s implementation nationwide discovered signs of complacency in some dioceses and eparchies.

“I’ve been addressing the body of bishops four, five times. I’ve driven the point that they can’t be complacent, and here we are again with another crisis,” Cesareo said.

“We went through the crisis in 2002 and had good policies and procedures in place, and allegations and current abuse have gone down,” he said. “But when we see the bishops don’t get it, that there’s still the notion of self-preservation at the expense of the victim … it just begs for lay leadership to come forward and to address this and help lead to healing.

“I really think that it’s a cultural change that has to take place. We can have all the committees, all the structures and all the policies, but there has got to be a cultural shift in the mindset of the bishops that they too are accountable, that they cannot be held to a different standard,” continued Cesareo, president of Assumption College in Worcester, Massachusetts. 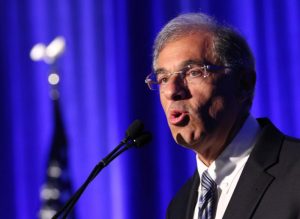 Cesareo was not alone in calling for a separate body to be established to handle accusations of abuse involving bishops. While details varied, the basic premise envisions that such a board would review abuse allegations or complaints of improper handling of an abuse claim by any bishop.

Just such a body has been sought since 2002, when the abuse scandal arose in the Archdiocese of Boston, by the church reform group Voice of the Faithful, said Donna Doucette, executive director.

“Having accountability from the bishops is absolutely the key. It is not possible for the bishops to police themselves. We as an organization believe that there must be an independent lay-led and dominated board,” Doucette told CNS.

“It’s heartening that finally after all these years, and we hope it’s more than just verbiage, that the very things that the bishops attacked us for saying, they’re saying it now,” she added.

The USCCB continued working on a series of measures Aug. 23, nine days after a Pennsylvania grand jury detailed more than 1,000 claims of alleged sex abuse in six dioceses in the state over 70 years and identified 301 priests and church workers who may have committed the crimes. The report also singled out some bishops for their improper handling of accused abusers.

Prior to Cesareo’s comments, Cardinal Daniel N. DiNardo of Galveston-Houston, USCCB president, called for laypeople to take a greater role in addressing the “moral catastrophe” of the latest abuse scandal.

He said Aug. 16 that the “substantial involvement of the laity” from law enforcement, psychology and other disciplines will be essential to the process of developing a comprehensive plan that was expected to be presented at the bishops’ fall general assembly in November in Baltimore.

F. DeKarlos Blackmon, secretariat director of life, charity and justice in the Diocese of Austin, Texas, urged laypeople to “step up and speak up” to address the catastrophe described by Cardinal DiNardo.

He called on the bishops to heed the advice of laity in areas in which the bishops may not have expertise, particularly when investigating abuse claims.

“We as laity need to be able to walk with the leadership. Pope Benedict stated the church can never be without the dedicated laity. I think it’s really important that we keep that in mind. We have a place at the table,” said Blackmon, an adviser to the bishops’ Subcommittee on African American Affairs.

Teresa Tomeo, host of a syndicated radio talk show, said it is the laity’s job to convince the bishops that more oversight of their actions is good for the church.

She suggested that the new scandal will “wake up a sleeping giant” as laypeople “respectfully and lovingly” address the bishops about the issue of clergy sexual abuse and help set a new course for the church.

“We need to come together as a group and … work with the hierarchy to come up with the steps that need to be made,” Tomeo said. “We need to stay, pray and get organized and be willing to make a difference for the sake of the church.”

By working together, laypeople can “help church officials catch up with the laity” in addressing sexual abuse, said Elizabeth Scalia, who blogs at The Anchoress.

“If we want to remain a eucharistic church, we’re going to have to help shape the leaders. We have to help them bring about a churchwide metanoia,” she said.

Scalia urged Catholics “to become really, really noisy” and begin writing “firm but respectful” letters to their bishop about their concerns. She said a presence or vigil outside of bishops’ residences also may be fruitful.

“There’s no reason not to go get a little protest group outside the bishop’s residence and say, ‘Bishop, we’re going to stay here and pray our rosary until you come out and talk with us,'” Scalia told CNS.

As a cornerstone of Catholic life, prayer can begin to set the proper tone for action and repentance, Tomeo and Scalia said. Both called in addition for a nationwide day of Masses or holy hours for reparation.

“The priest or bishop can lay prostrate before the Blessed Sacrament to ask for forgiveness,” Scalia proposed, hoping for more than a one-time “theatrical performance.”

The blogger advocated for additional steps as well in calling on bishops to “put some actions behind their words” by, for example, selling their residence and using the proceeds for the benefit of abuse survivors.

“You can give me all those words, but until you put actions behind that, I can’t judge the reality of that. It needs to be an impressive action,” she added.

John Carr, director of the Initiative on Catholic Social Thought at Georgetown University, recommended “a structure of accountability and responsibility and ways of collaboration” among the bishops and laity that advances the church’s mission.

“This is a time for mission, not just apology and reform,” he told CNS. “The only way forward is mission and laypeople have an essential role in carrying that mission forward.”

And while laypeople have an important role to play in response to the abuse crisis, Carr didn’t exempt them from contributing to the church’s troubles. He pointed particularly to attorneys, who advised bishops to refrain from commenting on abuse claims and decline meeting with victims, and therapists who “thought they could fix this (penchant for abusing young people) and gave terrible advice” to the bishops.

In addition, the church needs priests who set aside clericalism, he said.

“We absolutely need priesthood, but we don’t need clericalism. In that there are lots of great wonderful priests. Pope Francis has pointed out that clericalism is a disease that leaves people isolated and arrogant and loses why they became a priest,” Carr told CNS.

“The priesthood isn’t a club. It’s not a fraternity with its own silence and rules. It’s a vocation of service. In some places that got lost.”

Any steps that eventually will be undertaken will require broad collaboration among the laity and clergy and for each party to hold the other accountable, said Hosffman Ospino, associate professor of Hispanic ministry and religious education at Boston College.

“What can the laity do? Get involved,” Ospino said. “This (challenge) should galvanize our energy because we need to reclaim our church.

“Because we care for the community and care for these children, the vulnerable and families, we need to get involved. We need to be vocal about it. We need to find ways to help in our own church,” he said.

At the same time, Ospino cautioned about the potential rise in laicism, that only laypeople have the best answers to what is confronting the church. Such thinking is no better than clericalism, he said.

“We are all in the same boat and we need to hold each other accountable.”

Since the Second Vatican Council, the church has worked to include laypeople in key roles within the church including some levels of governance and Ospino called for “potential adjustments to canon law” to broaden the role of laity.

“I think that countless people are ready for this. The ball is on the clergy’s court.”

PREVIOUS: Minnesota prelate ‘steps aside’ from responsibilities with Napa Institute