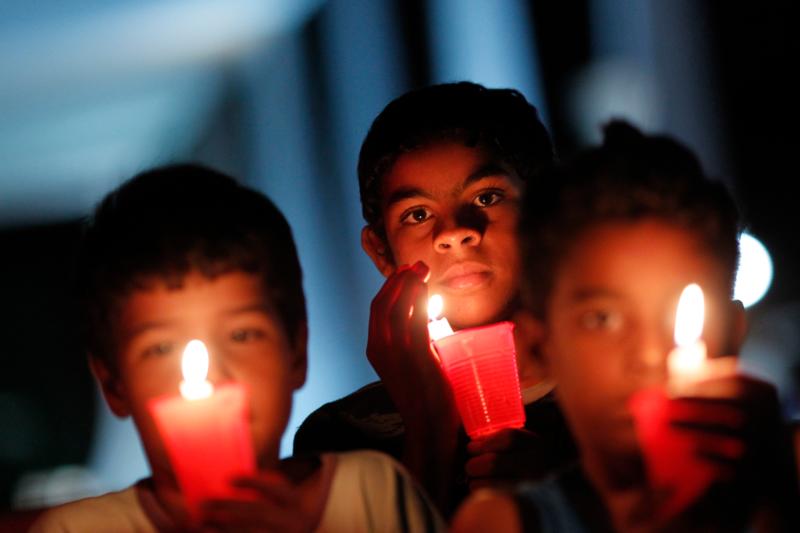 Young people keep vigil in front of Brazil’s Supreme Court in an attempt to influence ministers to vote against the legalization of abortion in 2012 in Brasilia. Brazil’s high court was considering decriminalizing abortion after hearings Aug. 3 and Aug 6. (CNS photo/Ueslei Marcelino, Reuters)

SAO PAULO, Brazil (CNS) — Representatives of the Brazilian bishops’ conference argued in front of the country’s Supreme Court against the decriminalization of abortion.

Reiterating Aug. 6 the Catholic Church’s teaching “in the defense of life from its conception until its natural death,” Bishop Ricardo Hoerpes of Rio Grande, Brazil, said that the issue was not for the court to decide.

“How will the Supreme Court explain a capital punishment sentence of an innocent, defenseless human being to justify our incapacity in producing adequate public policies when it comes to women’s reproductive rights?” the bishop asked the court, which was preparing whether to decide decriminalizing abortion.

A fetus cannot be addressed as another human body part, he said.

“It looks like we’re talking about a gallbladder, a kidney, or an appendix that we need to extirpate, which is causing women to die. The focus is wrong,” Bishop Hoerpes said to a room full spectators.

The bishop also stressed that the question focus on the existence of the baby.

“The right to life is the most fundamental of rights and, therefore, more than any other, must be protected. It is a right intrinsic to the human condition and not a concession of the state. The powers of the republic have an obligation to guarantee and defend it,” he said.

Bishop Hoerpes argued that the issue should be debated by the people’s representatives, in Congress, and not in a court of law.

The other Catholic representative to speak before the justices, Father Jose Eduardo de Oliveira e Silva, complained that during the hearing many more representatives advocating for the decriminalization of abortion speaking than people wanting to preserve life.

“This hearing lends itself only to legitimize the activism of this court,” he said. “It is pretending to listen to the parts, but in reality, is only legitimizing the (decriminalization) that will come next.”

To draw attention to the issue of decriminalization, the bishops’ conference called upon parishes Aug. 2 to ring church bells. At the foot of Rio de Janeiro’s Christ the Redeemer, an iconic symbol of the church’s importance in Brazil, Cardinal Orani Joao Tempesta of San Sebastian of Rio de Janeiro spoke to a group of pro-life supporters.

“From the height of the Corcovado, at the feet of the Redeemer, together, we want to draw the attention of the entire society to the importance of life,” Cardinal Tempesta to the crowd gathered atop the mountain overlooking the Rio de Janeiro. “We want the bells that ring not only in Rio, but throughout Brazil, to draw attention to this important moment in our history, with the aim of guaranteeing the inviolability of the right to life.”

Brazil has one of the most restrictive abortion laws in the world. It allows abortion only when the fetus is encephalitic, a pregnancy occurred because of rape, or the mother’s life is at risk.

After Monday’s hearing, the Supreme Court is expected to issue its decision in about 10 days.

The two-day hearing before the Brazilian high court comes days before legislators in Argentina, Pope Francis’ homeland, were expected to vote on a bill that would reduce abortion restrictions.

NEXT: Pope thanks Chilean bishops for steps taken to address abuse scandal