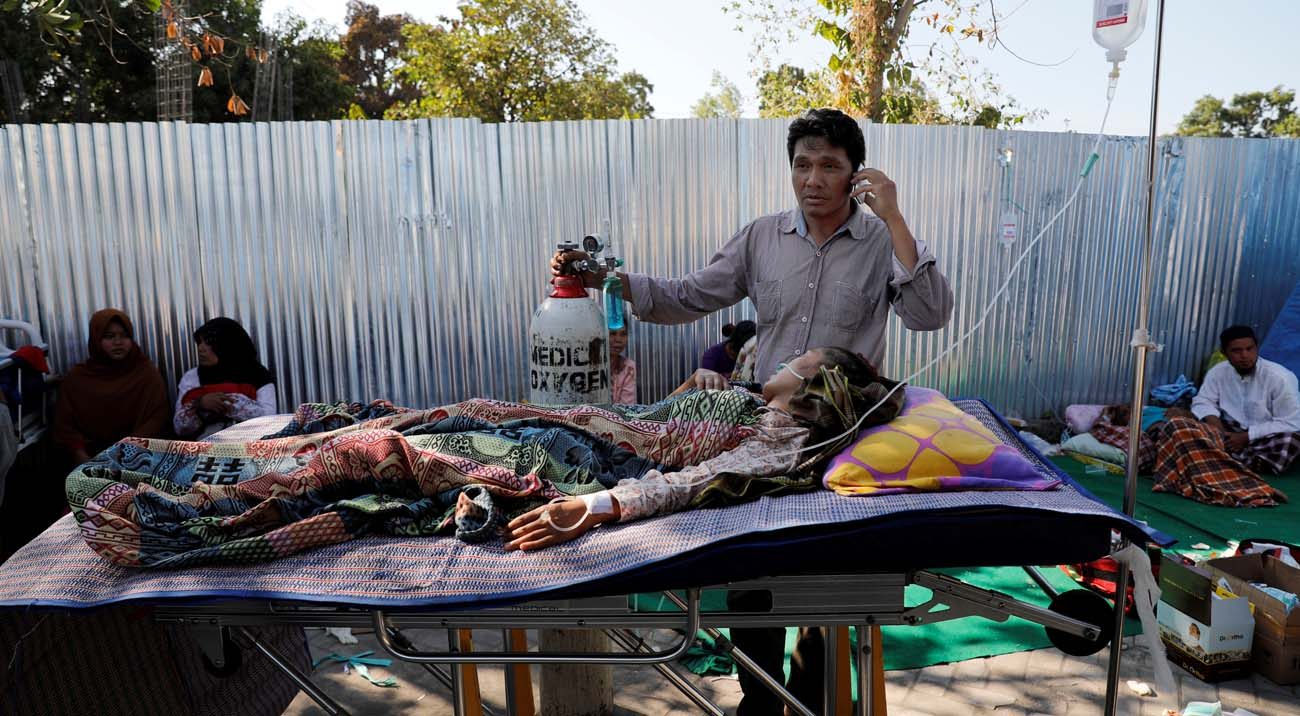 A man talks on his cellphone Aug. 6 next to an earthquake survivor outside a hospital on Lombok, Indonesia's popular tourist island. At least 91 people have been confirmed dead after the magnitude 7 earthquake Aug. 5, a week after another powerful quake killed more than a dozen people. (CNS photo/Beawiharta, Reuters)

JAKARTA, Indonesia (CNS) — At least 91 people have been confirmed dead after a magnitude-7 earthquake struck Indonesia’s Lombok Island on Aug. 5 a week after another powerful quake killed more than a dozen people.

The country’s National Disaster Mitigation Agency said more than 200 people were injured in the latest quake, which also jolted the neighboring tourist island of Bali, damaged thousands of buildings and forced thousands of people to flee their homes, ucanews.com reported.

Cardinal Parolin said the pope was praying “especially for the repose of the deceased, the healing of the injured and the consolation of all who grieve the loss of their loved ones.”

“In offering encouragement to the civil authorities and those involved in the search and rescue efforts as they assist the victims of this disaster, His Holiness willingly invokes upon the people of Indonesia divine blessings of consolation and strength,” the message said.

Among the damaged buildings was St. Mary Immaculate Church in the West Nusa Tenggara provincial capital of Mataram.

“The quake was stronger than before. The church ceiling fell down, but the church’s walls remain intact,” Father Laurensius Maryono, a priest at the parish, told ucanews.com Aug. 6.

“There were no casualties as there was no religious activities going on in the church when the quake occurred,” Father Maryono said.

“Some parishioners are currently trying to clean up the church and get rid of the debris,” he added.

The parish emergency response team was coordinating with one from the Diocese of Denpasar.

“They will go to the worst-hit areas of North Lombok and East Lombok districts to collect data. We will continue collect aid for victims, something we had started doing for victims of last week’s quake,” the priest said.

More than 130 aftershocks were recorded following the latest quake.

PREVIOUS: A month after the ‘clean-up,’ a Nicaraguan community mourns three dead

NEXT: Brazil church leaders speak against decriminalization of abortion