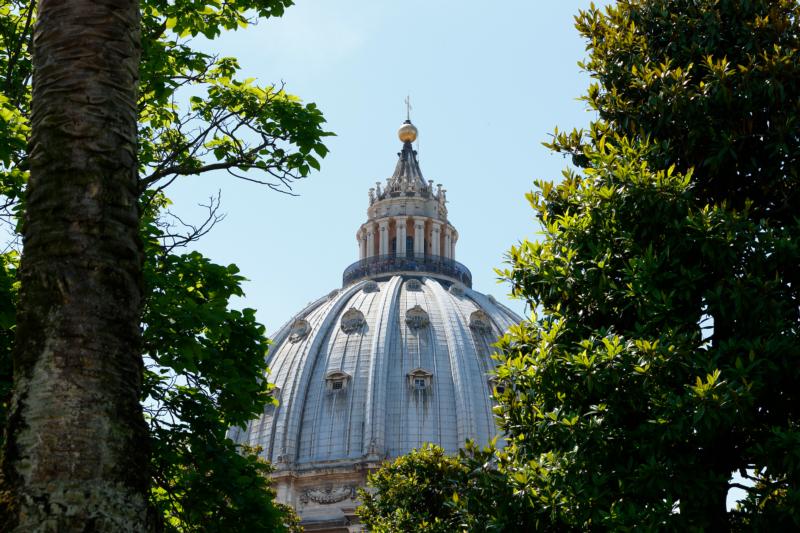 The dome of St. Peter’s Basilica at the Vatican is framed by trees June 14. Abuse accusations against U.S. Archbishop Theodore E. McCarrick will be “examined in a regular canonical trial,” the Vatican press office announced July 28. Until then the former cardinal has been ordered to pray and do penance. (CNS photo/Paul Haring)

UPDATED – VATICAN CITY (CNS) — Any member of the clergy accused of the sexual abuse of a minor is tried according to procedures outlined in the Code of Canon Law and specific norms spelled out in “Sacramentorum Sanctitatis Tutela” (“Safeguarding the Sanctity of the Sacraments”).

Normally those trials take place in the diocese where the crime occurred, but under the direction of the Congregation for the Doctrine of the Faith. However, when the accused is a bishop, it is up to the pope to determine the way to proceed.

When the Vatican press office announced July 28 that Pope Francis had accepted Cardinal Theodore E. McCarrick’s resignation from the College of Cardinals, it also said the pope “ordered his suspension from the exercise of any public ministry, together with the obligation to remain in a house yet to be indicated to him, for a life of prayer and penance until the accusations made against him are examined in a regular canonical trial.”

The “regular canonical trial” for an accused bishop, canon law experts said, usually would be a trial conducted by the apostolic tribunal of the Congregation for the Doctrine of the Faith. However, the phrase in the original Italian announcement referred to the “regolare processo canonico,” which could be translated as “regular canonical process.”

The regular process described in “Safeguarding the Sanctity of the Sacraments” includes the option of an “extrajudicial decree,” an administrative process by which the accused is presented with the evidence and given an opportunity for self-defense, but there is no trial.

Two canon lawyers experienced with how the apostolic tribunals of the doctrinal congregation work spoke with Catholic News Service in Rome in early August, but requested their names not be used because they are not congregation staff members and cannot speak for the congregation.

Both lawyers said canon law also would view as a crime the sexual abuse or harassment of an adult by his superior, for example, in the case of a bishop abusing adult seminarians. The crime could be prosecuted as an “abuse of office,” one of the canon lawyers said. The other said it also could be prosecuted as a “delict against the Sixth Commandment,” which says, “You shall not commit adultery.” The phrase in church law, he said, may sound vague, but it leaves room for prosecuting a variety of sexual crimes. And the punishment prescribed is to be commensurate with the offense.

A canonical trial differs in many ways from secular criminal trials in the United States, for example.

An apostolic tribunal of the doctrinal congregation has at least three and as many as five judges. In the past, accusations against bishops have been tried before a five-judge panel with all of the judges being bishops.

In canon law, there is a basic presumption of innocence but not to the extent seen in U.S. or British law. The accused has the right to defend himself and the right to counsel. But the promoter of justice, a role similar to prosecutor, does not have to prove motive, means or criminal intent.

Also unlike U.S. trials, the prosecutor and defense counsel do not question the witnesses. That is the task of the judges.

Both the prosecutor and the defense counsel propose a list of witnesses, but the judges must approve them. The judges have access to the report of the preliminary, diocesan investigation and are likely to use that to determine which witnesses are essential.

The accused can testify and can refuse to answer questions that might incriminate him. Also, in accordance with canon 1728.2, no oath is administered to the accused. One of the canon lawyers told CNS that the oath is so sacred to the church that it would not risk putting a person in the position of violating it with perjury.

The promoter of justice and the defense counsel are given copies of all the testimony, and it is their duty to summarize it and make their case based on the evidence presented. Each lawyer sees the other’s submission and comments on it, pointing out where they see weaknesses or inconsistencies in the testimony or the other’s case. The comment process can go back and forth several times, but when the promoter of justice says he is finished, the defense counsel is given the last word.

The judges deliberate in private, usually at the Vatican. Three verdicts are possible: guilty, not guilty or not proven. The last indicates that while there is no condemnation or penalty, the accusations raised enough questions that church officials should be cautious in the future about assigning the accused to unsupervised ministries with minors or vulnerable adults.

In a canonical trial, everything is covered by confidentiality, usually referred to as “pontifical secret.” The phrase does not indicate a refusal on the church’s part to report a crime to the police — in accordance with local laws, such reporting already should have occurred when the crime was first reported to the diocese before the allegations were forwarded to Rome, one of the canonists told CNS.

If there is a guilty verdict and the penalty involves the accused being removed from ministry or from office or having limits placed on ministry, it is announced publicly because it impacts the Catholic community.

NEXT: World must not forget suffering of Ukraine and its people, says prelate