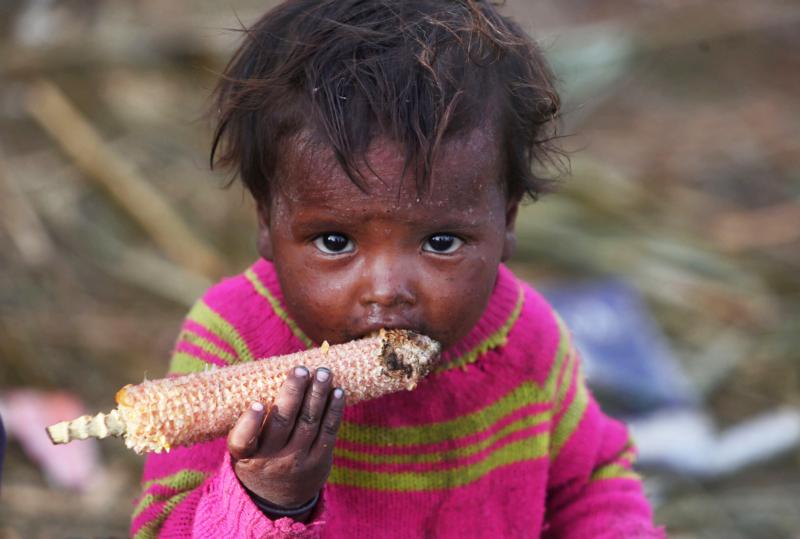 A child eats corn outside a makeshift shelter in 2015 in Kashmir, India. The Catholic Church agency Caritas has launched a project that aims to end hunger across South Asia by 2030. (CNS photo/Farooq Khan, EPA)

NEW DELHI, India (CNS) — The Catholic Church agency Caritas has launched a project that aims to end hunger across South Asia by 2030.

“Climate change is a global challenge and affects agricultural production and human well-being. It hits hardest where people directly depend on agriculture for food and livelihoods,” said Sunil Simon, project director in India.

The Smallholder Adaptive Farming and Biodiversity Network was launched in June during Caritas Asia’s regional conference in Bangkok.

“The unique program aims to address our common goal of ending hunger by 2030,” said Christoph Schweifer, secretary general of Caritas Austria, a partner in the project.

Caritas organizations in Bangladesh, Nepal and Pakistan will implement the program with the support of Caritas Austria and Caritas Switzerland.

The effort aims to fight hunger and malnutrition by promoting local food through small-scale farming in selected areas of South Asia in response to climate change, Simon said.

India has nearly 191 million hungry people — 25 percent of the world’s total — who do not have a complete meal each day, said the U.N.’s 2017 report on the state of food security and nutrition.

The project aims to create a network of farmers to discuss their environment, climate and agrarian economy to pinpoint their specific problems. They will then identify locally acceptable solutions and test them to arrive at the best solution for growing crops.

“Mutual sharing, learning and proactive problem solving between farmers, agricultural scientists and governmental and non-governmental organizations are at the core of this project,” Simon said.

PREVIOUS: Comparing the attempts to legalize abortion in Ireland and Argentina