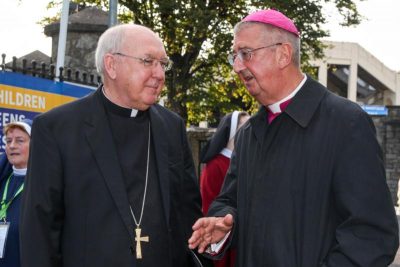 DUBLIN (CNS) — Cardinal Kevin Farrell, head of the Vatican’s Dicastery for Laity, the Family and Life, said the church needs God to help it build bridges, to communicate and to help it understand that “we need to speak to each other and accept each other as children of God.”

Speaking to media Aug. 22, the first full day of the World Meeting of Families, the U.S. cardinal said that was the message international gathering was hoping to achieve.

In a wide-ranging news conference that touched on clerical sex abuse, the role of women in the church and LGBT issues, the cardinal said the fundamental message of the Gospel was the same for all of God’s creation.

“It is extremely important that all Catholics understand that we are all created in the likeness and image of God,” he said.

The Dublin-born prelate was asked about building bridges with Catholic women like Mary McAleese, former president of Ireland, who has said she will stay away from the pastoral congress at the Royal Dublin Society because of its failure to be more inclusive of LGBT families and because of the church’s treatment of women.

The cardinal said he was “always open to respectful dialogue with everybody.”

“I have always in my life tried to listen and to enter into communication and dialogue with all groups of people,” he said.

The 70-year-old also said he was not snubbing a women’s leadership symposium organized by the World Meeting of Families. He explained that he could not attend the “Voices of Impact” symposium Aug. 25 because it clashes with his meeting with Pope Francis as he arrives in Ireland for two days.

“I am the person who is in charge of the world gathering of families and, obviously, I am the one inviting the pope to come to this event,” Cardinal Farrell said.

“So far in my life I have not been able to bilocate — maybe someday I will, but right now that is an impossible task,” he joked.

In March, McAleese addressed the conference “Why Women Matter,” organized by the Voices of Faith group. It was forced to relocate to a venue outside the Vatican following Cardinal Farrell’s protest over McAleese and two other speakers. In her address, McAleese accused the church of being a “global carrier of the virus of misogyny.” She recently revealed that she had lodged a formal complaint with Pope Francis over Cardinal Farrell’s treatment of her.

Speaking at the same Dublin news conference as Cardinal Farrell, Dublin Archbishop Diarmuid Martin, president of the World Meeting of Families, described the number of people sexually abused as children by Catholic clergy and abused in church-run institutions in Ireland as “immense.”

He said the number was so large because it included victims of industrial schools, the Magdalene laundries, mother and baby homes and children abused by priests in parishes.

He underlined that victims who have come forward are only a fraction of the real number abused and that there “are many people who are still holding in their hearts the sadness of abuse.”

Archbishop Martin also highlighted his concern over the “very low” number of abusers convicted in the Irish courts for their crimes.

“There may be ways in which the judicial system could make it easier for people who come forward,” he suggested.

“People are asking questions and rightly so. I said myself on Sunday that we have to ensure that the factors which contribute to and protect abusers are addressed and they are addressed definitely and definitively everywhere.”

“I believe that the truth will make you free even if the truth is unpleasant,” he added.

He said in Ireland, the church had made “extraordinary progress” with mandatory reporting obligations.

Teresa Kettelkamp, a retired member of the Illinois State Police and a current member of the Vatican’s Pontifical Commission for the Protection of Minors, told journalists, “All of us in leadership and all Catholics feel deep disappointment at what our church leaders have done and what they have failed to do.”

She said a key issue was “what did the church know, when it did know, what did it not do and what did it do. Those are the things you need to know to make a solid judgment.”

Some 37,000 people from 116 countries are attending events at the world meeting’s pastoral congress Aug. 22-24, ahead of Pope Francis’ arrival for the Festival of Families.