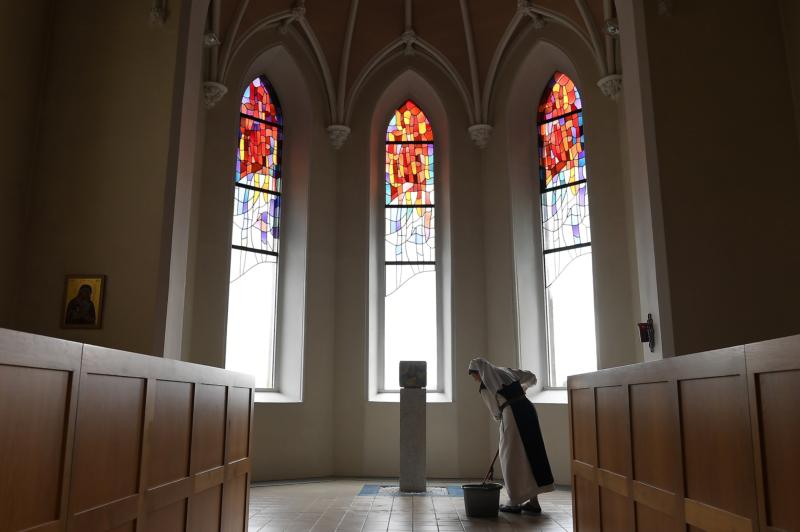 A woman religious mops the church floor at St. Mary’s Abbey in Glencairn, Ireland, Aug. 18. In an open letter to Pope Francis Aug. 22, Bishop Philip Egan of Portsmouth said an “extraordinary synod on the life and ministry of the clergy” would help to combat the scourge of clerical child sex abuse. (CNS photo//Clodagh Kilcoyne, Reuters)

He was among bishops from around the world who called for action after Pope Francis published his Aug. 20 letter to Catholics about the clerical sexual abuse crisis.

In an open letter to the pope Aug. 22, Bishop Philip Egan of Portsmouth said an “extraordinary synod on the life and ministry of the clergy” would help to combat the scourge of clerical child sex abuse.

Bishop Egan told the pope his letter was prompted by the “terrible abuse of minors by clergy” documented by the Pennsylvania grand jury report. The findings spoke of credible allegations against 301 priests and church workers in cases involving more than 1,000 children over seven decades.

Scandals in the United States, England, Ireland, Australia and Chile, Bishop Egan said, have proven that sex abuse by members of the clergy is “a worldwide phenomenon in the church” that must be addressed.

“The synod might begin with a ‘congress,’ attended by the bishops but formed of laity and others expert in the clergy abuse scandals and in the safeguarding of children and the vulnerable,” he said in his letter, forwarded by email to Catholic News Service Aug. 22.

The conclusions of the congress, he added, “could then be taken forward into a Synod of Bishops proper.”

“I suggest the synod be devoted to the identity of being a priest/bishop, to devising guidance on lifestyle and supports for celibacy, to proposing a rule of life for priests/bishops and to establishing appropriate forms of priestly/episcopal accountability and supervision,” Bishop Egan said.

He also explained that as a former seminary formator, he devised a system of “annual assessments and scrutiny” based on St. John Paul II’s apostolic exhortation on the formation of priests “Pastores Dabo Vobis” (“I will give you shepherds”).

However, as a bishop, there are few tools available to “facilitate the day-to-day management of clergy” and continual assessments, he said.

“It ought to be possible to devise mechanisms to help bishops in their responsibilities toward clergy and to help clergy realize they are not ‘lone operatives’ but ministers accountable to the direction and leadership of the diocese,” Bishop Egan wrote.

Priests, Bishop Egan suggested, must not serve as “lone operatives” but be accountable to the direction and leadership of the diocese and should be supported by “ongoing assessment or ministerial supervision.”

Although the pope’s message received praise for its empathetic response to the sufferings of abuse survivors, church leaders and episcopal conferences also called for concrete measures to ensure the safety of children and vulnerable adults.

In London, Cardinal Vincent Nichols of Westminster, president of the Bishops’ Conference of England and Wales, echoed the pope’s sentiments in an Aug. 22 letter to clergy in which he said he was “utterly ashamed that this evil has, for so long, found a place in our house, our church.”

“This evil has particular abhorrence because not only is it a terrible abuse of power, but also because, in its evil, it both employs and destroys the very goodness of faith and trust in God,” Cardinal Nichols said.

“We hope and pray that the Catholic faithful will assist all of us in every way to create safe and respectful environments for everyone, especially minors and vulnerable adults in the church and in all of society,” the statement said.

Archbishop Mark Coleridge of Brisbane, president of the Australian bishops’ conference, issued a statement Aug. 21 to assure Catholics in Australia that “we share the Holy Father’s determination to protect young people and vulnerable adults.”

“These are important words from Pope Francis, but words are not enough. Now is the time for action on many levels,” Archbishop Coleridge said.

Austrian Cardinal Christoph Schonborn of Vienna told Austria’s Kathpress news agency Aug. 21 that the Catholic Church must continue to develop abuse prevention methods “so that abuse does not have a place in the church.”

Although the pope’s letter is a step forward, the cardinal said, the church “has an urgent need of intensifying its efforts to guarantee the protection of minors and adult in vulnerable situations.”

“Our first concern must be the victims, without compromise,” he said.

In the pope’s native Argentina, bishops thanked Pope Francis for his letter and expressed their sorrow “for the suffering inflicted on minors and vulnerable adults due to sexual abuse, of power and of conscience.”

“We adhere and assume your irrevocable commitment so that the protection of minors and adults in vulnerable situations may be ensured,” the bishops said in an Aug. 21 letter to the pope.

However, not all reactions to the pope’s letter were positive. The Asian church news portal ucanews.com reported that several leading Indian Catholic women were angered by the pope’s call for fasting and prayer.

“Making the laity fast and pray is not the solution,” theologian Kochurani Abraham told ucanews.com Aug. 23. “Clerical sexual infidelity should be punished and not hidden under the carpet.”

The church, she added, must make a clear distinction between sin and crime.

“Sin is something that you can repent and be absolved of, but crime has to be punished. The sooner the church realizes this, the better,” Abraham said

Catholics in the country also are coping with the issue of abuse after an unidentified Catholic nun accused Bishop Franco Mulakkal of Jalandhar of raping her four years ago, then sexually abusing her multiple times over the following two years.

Sister Nirmalini, provincial of the Sisters of the Apostolic Carmel, told ucanews.com that several other allegations of sexual abuse by priests have been reported to local church officials but have often fallen on deaf ears.

“The silence of the church is deafening, and the victim is made to feel guilty for raising her voice,” Sister Nirmalini said. “Will the bishops stand up for justice for victims within the church?”