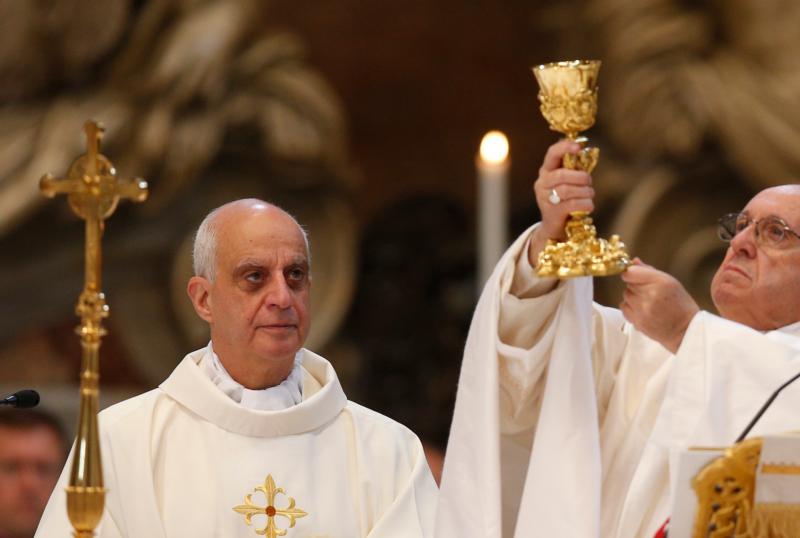 Archbishop Rino Fisichella, president of the Pontifical Council for Promoting New Evangelization, celebrates the Eucharist with Pope Francis during a Mass in St. Peter’s Basilica at the Vatican April 10. Archbishop Fisichella said the pope’s revision of the Catechism of the Catholic Church to assert that capital punishment is inadmissible shows how the church can grow in its understanding of the basic tenents of faith. (CNS photo/Paul Haring)

VATICAN CITY (CNS) — Pope Francis’ revision of the Catechism of the Catholic Church to assert that capital punishment is morally inadmissible shows how the church can grow in its understanding of the implications of basic tenets of faith, said Archbishop Rino Fisichella, president of the Pontifical Council for Promoting New Evangelization.

“To guard the sacred deposit of faith does not mean to mummify it,” the archbishop wrote in L’Osservatore Romano, the Vatican newspaper.

Safeguarding the church’s long-standing teachings means allowing them to respond to the new questions of each new generation, the archbishop said in the article published Aug. 2, the same day the Vatican released the revised text of the catechism’s section on the death penalty.

Announcing the revision, Cardinal Luis Ladaria, prefect of the Congregation for the Doctrine of the Faith, said, “The new text, following in the footsteps of the teaching of John Paul II in ‘Evangelium Vitae,’ affirms that ending the life of a criminal as punishment for a crime is inadmissible because it attacks the dignity of the person, a dignity that is not lost even after having committed the most serious crimes.”

The revised text acknowledged the church’s previous acceptance of capital punishment when imposed by a “legitimate authority, following a fair trial,” but said that “there is an increasing awareness that the dignity of the person is not lost even after the commission of very serious crimes” and that governments do not have to execute murderers to prevent them from killing again.

Both Cardinal Ladaria and Archbishop Fisichella noted how the revised text is based on the development, especially under St. John Paul II and retired Pope Benedict XVI, of church teaching on the death penalty.

“A careful reading allows us to verify how the church in recent decades has made real progress in understanding her teaching on the dignity of the person and, consequently, in the reassessment of her thinking on the death penalty,” the archbishop wrote.

With the revised text, he said, “the church takes a decisive step in promoting the dignity of every person, whatever crime he or she may have committed, and explicitly condemns the death sentence.”

“This move,” the archbishop wrote, “highlights that one is dealing with a true dogmatic progress with which a content of the faith is clarified, one that has steadily matured to the point of making one understand the unsustainability of the death penalty in our time.”

At the same time, he said, the church “does not forget the suffering of the victims involved, nor the injustice that has been perpetrated.”

But it insists that “justice take its own decisive step, not out of rancor and vengeance, but from a sense of responsibility beyond the present moment,” Archbishop Fisichella wrote.

Affirming that the death penalty is morally inadmissible, he said, “recognizes that conversion, repentance and the desire to start life afresh cannot be taken away from anyone, not even from those who have been guilty of very serious crimes.”