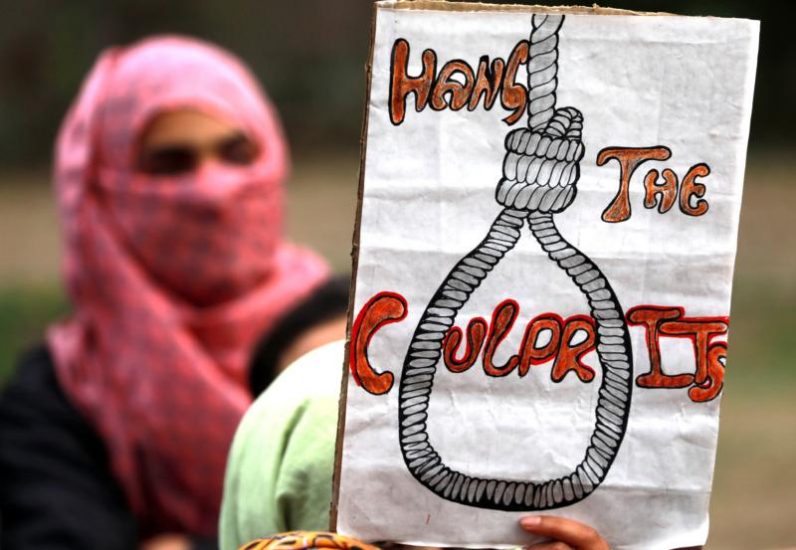 A student of All Ladakh Association of Kashmir holds a placard during a protest calling for justice in the rape and murder case of an eight-year-old nomadic girl in Srinagar, India, April 16. India has confirmed the death penalty for the child rapists, but Catholic Church officials doubt it will curb sexual violence. (CNS photo/Farooq Khan, EPA)

NEW DELHI (CNS) — India’s parliament has passed a law allowing the death penalty for people convicted of raping girls younger than 12, but Catholic Church officials expressed doubt that it will curb increasing sexual violence against children across the country.

The bill replaces an emergency amendment to a criminal law adopted in April following national outcry over the rape and murder of an 8-year-old girl in Kashmir in January and other shocking attacks across the country, ucanews.com reported.

India’s penal code had provisions to punish rapists with a seven-year jail term but had no harsher punishment for those convicted of raping girls.

The new law states that an investigation and trial should be completed within two months in the cases of sexual attacks on minors, while appeals should be resolved within six months. The law allows no provision for bail.

However, Bishop Theodore Mascarenhas, secretary general of the Catholic Bishops’ Conference of India, said the church cannot accept the death penalty no matter how grave the crime.

“The Catholic Church is against the death penalty, but the law of the land will take its stand and we respect it. But our biggest question is, will it help solve the issues?” he told ucanews.com.

Sister Mary Scaria, an Indian Supreme Court lawyer, said rape cases will not stop until offenders are taught to respect their mothers and sisters.

“Why all of a sudden the new law? We have a very good judiciary system which can tackle any crime, be it rape or murder. Is the government serious about it?” she asked, suggesting the government move was to appease public appeals for stringent punishment of child rapists.

Some Hindu and Muslim leaders also doubted the effectiveness of the new law, saying instead it would be better to focus on changing prevailing views that women and girls are commodities to be used for work and pleasure.

Hindu spiritual leader Goswami Sushil Ji Maharaj said the Hindu religion reveres girls like goddesses, so attacks on them cannot be tolerated. People must work toward the social change that stresses equality for all, he said.

“We have no right to take away a life, but sometimes it can give a message about the gravity of the crime,” he said.

Muhammad Arif, chairman of the Center for Harmony and Peace in Uttar Pradesh, questioned the need for another law. “We have more than enough laws to check cases like rape, but do we implement them seriously?” he asked.