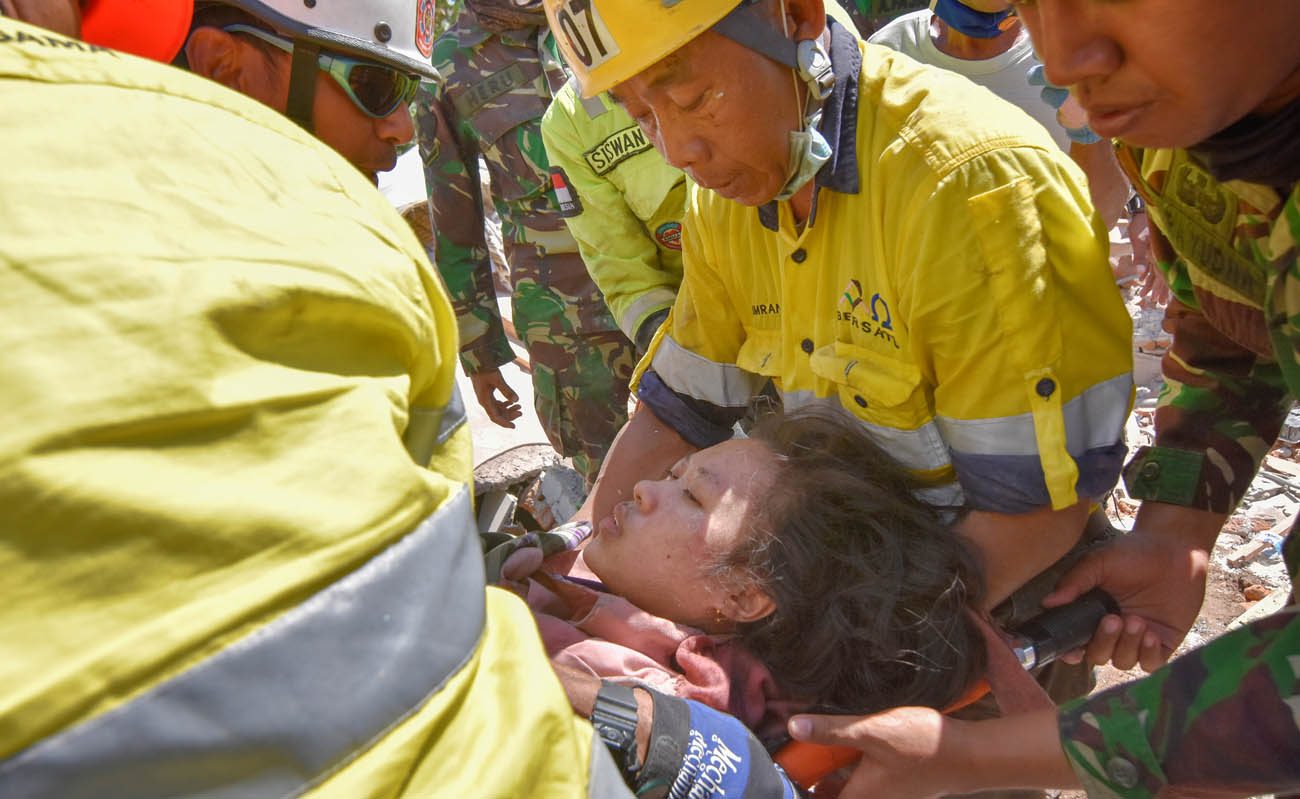 Rescue workers and soldiers carry a woman Aug. 7, who survived after being trapped in rubble following an earthquake on Lombok, Indonesia. At least 105 people have been confirmed dead after the magnitude 7 earthquake Aug. 5, a week after another powerful quake killed more than a dozen people. (CCNS photo/Ahmad Subaidi, Antara Foto via Reuters)

JAKARTA, Indonesia (CNS) — Catholic hospitals in Indonesia have sent medical teams to treat hundreds of people injured by a magnitude 6.9 earthquake that struck the tourist island of Lombok near Bali Aug. 5.

The death toll stood at 105 by mid-afternoon Aug. 7 with 236 injured, ucanews.com reported. Officials expected the death toll to rise as Muslims were yet to be pulled from a mosque that collapsed while they were praying inside.

Officials said most of the casualties were caused by falling rubble as buildings collapsed. There were no reported foreigners among the dead, but some media reports claimed several fatalities in the neighboring Gili Islands.

Thousands of buildings were damaged, and several thousand people were forced to flee their homes, the National Disaster Mitigation Agency reported.

In the Gili Islands, an archipelago popular among backpackers, an estimated 2,000 or more people were being evacuated after spending a nerve-wracking night camped atop a mountain.

“Medical workers are really needed right now to treat the victims,” Sister Paulina, a member of the Congregation of Missionary Sisters Servants of the Holy Spirit and spokeswoman St. Anthony Catholic Hospital in the provincial capital of Mataram, told ucanews.com Aug. 7.

She said the hospital had treated more than a dozen victims.

“We placed them in the hospital’s parking area as the situation was unpredictable, aftershocks continued to happen,” Sister Paulina said. “This morning we took them to the hospital’s treatment rooms.”

More than 176 aftershocks were recorded following the quake. The Aug. 5 temblor was the second major earthquake to shake Lombok in a week. A July 29 quake caused 14 deaths and dozens of injuries.

Sister Paulina said the hospital sent a team of nurses to the government-run hospital in West Nusa Tenggara province to provide further assistance and make sure those seeking refuge have temporary shelter.

“Many volunteers have contacted me and asked if we need any help. I told them that medical teams are what I need the most. I need orthopedics and neurologists,” she said.

Dr. Agung Kurniawan Saputra, who works at the Surabaya hospital, said three nurses were sent to St. Anthony Hospital a day after the quake and they will remain in Lombok for at least a week.

“This morning we sent (another) doctor and a nurse,” he told ucanews.com Aug. 7.

“If possible, they will go to those areas affected by the quake in cooperation with local authorities from today.”

NEXT: Kids of Armenian descent experience summertime beacon of hope in Beirut