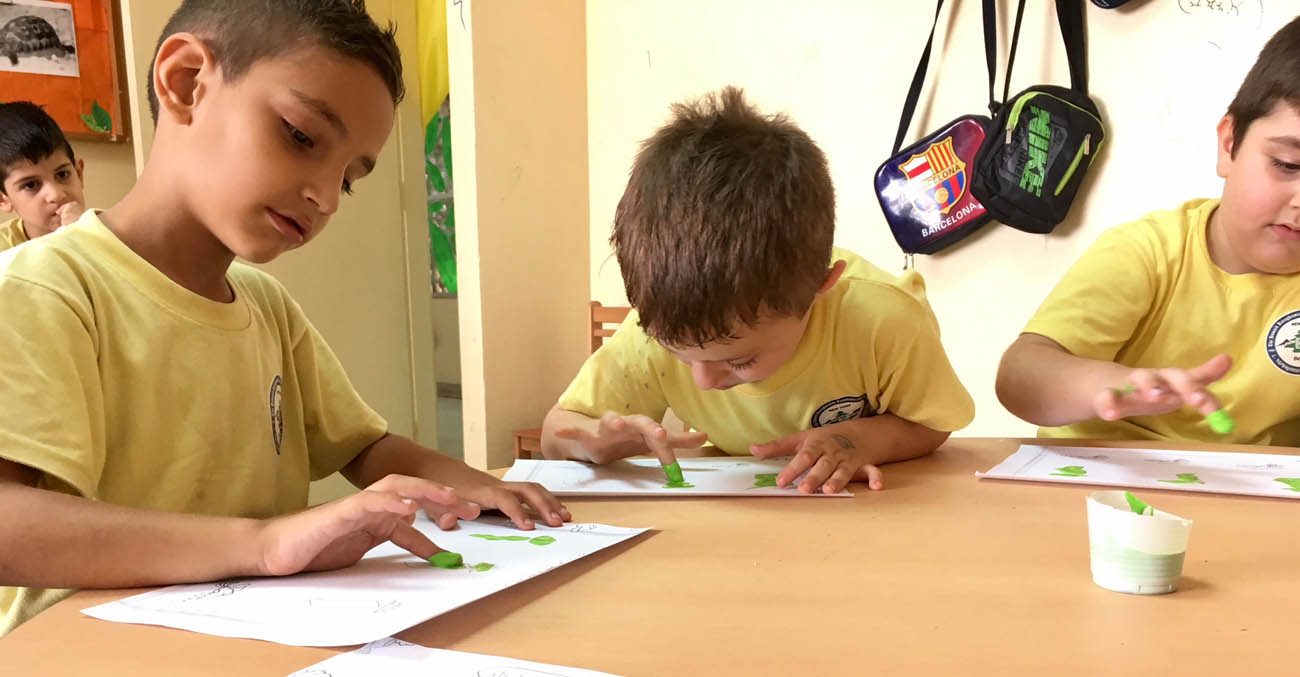 Children engage in a finger painting activity at a summer day camp run by the Howard Karagheusian Commemorative Corporation in the Bourj Hammoud section of Beirut. The camp is funded in part by the Catholic Near East Welfare Association. Of the 390 Christian children, half are Lebanese Armenian, and half are Syrian Armenian, who are refugees from Aleppo. (CNS photo/Krikor Aynilian, courtesy Howard Karagheusian Commemorative Corporation)

BEIRUT (CNS) — In the sweltering, crowded Bourj Hammoud district of Beirut, a group of children from poor Christian families have discovered a summertime oasis of joy.

The 390 children, ages 3 to 13, are participants in the Howard Karagheusian Commemorative Corporation’s day camp, funded in part by the Catholic Near East Welfare Association, a pontifical aid agency.

Held in a school, the seven-week day camp combines sports, games, art and activities such as cooking, music and dance with a mix of instruction in nutrition, hygiene, math, English and Bible study. The children also go on weekly outings to places their families normally are not able to afford.

The camp gives children an opportunity “to have new friends, to enjoy their childhood, to have these moments of fun and lovely memories within their miseries,” Serop Ohanian, the corporation’s Lebanon field director, told Catholic News Service.

There are no playgrounds or green spaces in densely populated Bourj Hammoud, often referred to as Little Armenia. Settled by Armenians who had fled the early 20th-century genocide, the area has grown into a vibrant community. However, Lebanon’s economic crisis has caused more families to slip into poverty. The district also has seen Syrian refugees resettling there.

Half of the camp participants are Lebanese Armenians and half are Syrian Armenian refugees from Aleppo, Syria. All are Christian. Armenian is the principal language spoken.

The children are nurtured and guided by 34 volunteers, most of whom are university students majoring in education, psychology and special education, specially trained by the corporation.

Volunteer Nver Bodozian, who works with 3-year-old children, is a refugee from Aleppo herself. She and her family came to Lebanon six years ago, early in Syria’s civil war. Her great-grandparents — who fled the Armenian genocide — originally settled in Aleppo.

Bodozian and her family are hoping to obtain visas to be resettled in a Western country. Meanwhile, she is studying to become a teacher at Kinder Mesrobian College in Beirut.

“We show the children love and care,” Bodozian said. “Even though I feel they have so much stress and sadness in their lives, they are so happy here.”

Bodozian and another volunteer have just completed an art activity with the preschoolers. Brilliant finger-painted butterflies, still drying, are hung across the classroom.

Next on their program is short play, retelling “The Three Little Pigs” story.

Young Migel, in the role of the wolf, “taps” on an imaginary door, making threatening “woo” sounds. His classmates, portraying little pigs, gleefully scoot around the room in feigned fright.

Later, seated at colorful child-sized tables and chairs, the youngsters prepare to eat sandwiches before recess. Bodozian leads them in a short prayer: “Thank you, God, for this day. Thank you for our food. Please help the poor.”

“If they can have faith in God beginning at a young age, it’s everything,” Bodozian said.

“Although not a faith-based organization, we do encourage the children and their families to trust in God and live by faith,” Ohanian explained.

“We want to spread a beacon of hope within the community, within these neighborhoods and tell the children to dream big dreams, to get out from their difficulties and give them the opportunity to be a productive member within this community,” he said.

Downstairs, recess is already underway for the  7- and 8-year-olds. Balls zigzag across the outdoor courtyard, following the rhythm of the children’s joy. Some kids stroll together, chatting with arms joined. A group of girls practice dance moves.

Taking a break from shuffling a soccer ball, Kevin, 8, a refugee from Aleppo, said, “my best friends are here,” pointing to Sevag of Lebanon and Garbis, also of Aleppo.

Their teacher, Alice Majarian, 26, told CNS that she calls the trio the Three Musketeers.

Majarian recounted the camp’s first day when Kevin told his campmates that they should play nicely together. Kevin is “really organized and friendly,” Majarian said.

Sevag likewise promotes good manners to his campmates. Majarian said he frequently tells the class, “we should respect the teachers” and reminds them to say “please” and “thank you.”

“When you see the children growing and blossoming before you, it’s a great satisfaction,” she said as the trio resumes playing.

The children come from “complicated” backgrounds, whether because of financial struggles in their family or from the hollowed-out existence as refugees, Majarian said.

“These children are not refugees voluntarily. It’s really difficult to be pulled away from your house, surroundings and friends, to see how your parents and neighbors suffered. Digesting all those traumas is too much for children to handle,” she said.

The corporation is a program of the Karagheusian Foundation, which was established in New York City in 1918 after the death of 14-year-old Howard Karagheusian from pneumonia. His parents resolved to establish a humanitarian mission in his memory, focusing at first on sheltering, feeding and educating orphaned children who had survived the Armenian genocide. The corporation has operated in Lebanon, Syria and Armenia for more than 95 years.

NEXT: Fear, uncertainty lead to a ‘do-it-yourself’ religion, pope says