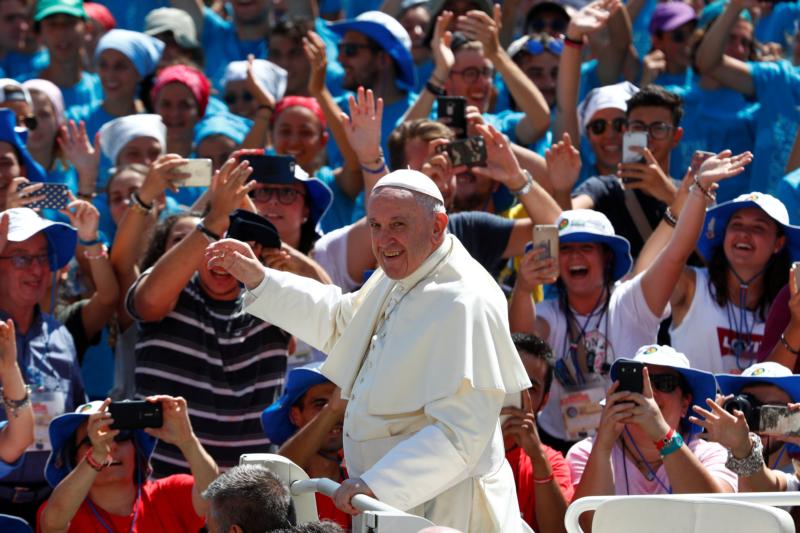 VATICAN CITY (CNS) — Being a Christian isn’t just about not doing evil, but it is a daily exercise in loving others through good works and deeds, Pope Francis said.

Many times, Christians can be tempted to “think they are saints” and justify themselves by saying, “I don’t harm anyone,” the pope told thousands of Italian young adults Aug. 12.

“How many people do not do evil, but also do not do good, and their lives flow into indifference, apathy and tepidity! This attitude is contrary to the Gospel and is also contrary to the character of you young people who, by your very nature, are dynamic, passionate and courageous,” he said.

According to the Vatican, an estimated 90,000 people were in St. Peter’s Square for the pope’s address and Angelus prayer after an outdoor Mass celebrated by Cardinal Gualtiero Bassetti of Perugia-Citta della Pieve, president of the Italian bishops’ conference.

Filling the square and the main street leading to St. Peter’s, the weary pilgrims braved the scorching summer temperatures of Rome and were cooled off by the cascading spray of water from Vatican fire department hoses.

After the Mass, the pope arrived in his popemobile and greeted the crowd, occasionally catching items that young people would throw toward the moving vehicle or stopping to bless babies and young children.

The Italian pilgrimage, which included an evening meeting in Rome with the pope Aug. 11, was part of the Italian church’s preparation for October’s Synod of Bishops on young people and vocational discernment.

In his talk before the recitation of the Angelus, Pope Francis reminded the young men and women to live their lives “in a coherent way, not with hypocrisy” by renouncing evil and doing good.

Pope Francis invited the youths to repeat the words of St. Alberto Hurtado as a reminder of their baptismal call to action: “It is good to not do evil, but it is evil to not do good.”

He also urged them to be “protagonists of good” and to not be satisfied with simply not doing bad things.

NEXT: Sexual abuse by monks covered up at schools in England, inquiry finds