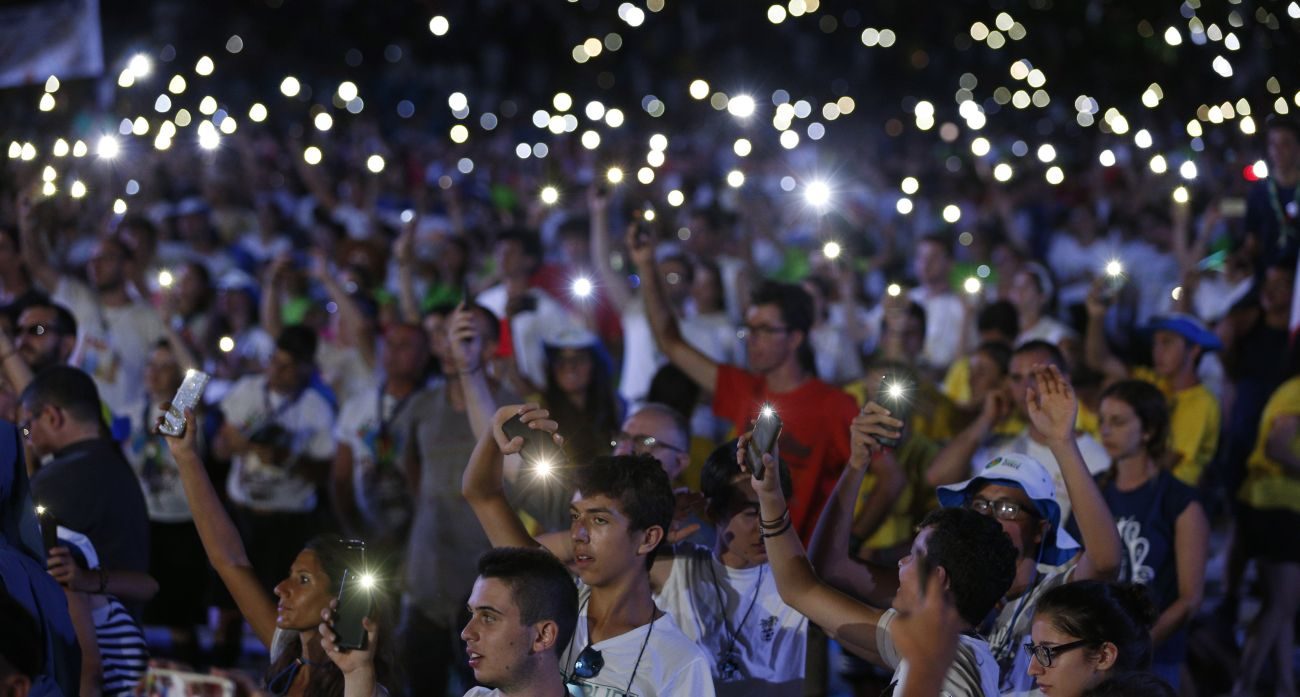 Italian young adults light up the night with their phones during an evening meeting with Pope Francis at the Circus Maximus in Rome Aug. 11. (CNS photo/Paul Haring)

ROME (CNS) — Members of the Catholic Church sin and give scandal, it’s true, Pope Francis said, but it is up to each Catholic to live the faith as authentically as possible and witness to the world the love of Jesus.

“The best way to respond is with witness,” the pope said Aug. 11 in response to a young man who said, “The useless pomp and frequent scandals have made the church barely credible in our eyes.”

Pope Francis spoke about witness, dreams and true love during an evening meeting with some 70,000 young adults, aged 16 to 30, gathered at Rome’s Circus Maximus at the end of a pilgrimage. Most of them had walked at least 50 miles over the previous three or four days. Representatives came from 195 of Italy’s 226 dioceses, and 150 bishops walked at least part of the way with groups from their dioceses.

The young people began congregating at the dusty site of the ancient Roman stadium early in the afternoon when temperatures were already in the 90s. They gathered together on the shady slopes of the field, under the loudspeaker towers and even set up their pup tents seeking relief from the bright sun.

Five young people were chosen to share their stories with the crowd and ask Pope Francis questions. They asked his advice about keeping their dreams alive when the future seems so uncertain, how to prepare to marry and start a family and how to get church leaders to listen to them rather than preach at them.

“He put his finger in the wound,” the pope said in reference to the last question, which was posed by Dario, a 27-year-old hospice nurse. He told the pope, “For young people, commands from on high are no longer enough, we need signs and the sincere witness of a church that accompanies us and listens to the doubts our generation raises each day.”

Dario’s judgment of the church’s pastors is “strong,” the pope said, and it is true that “sometimes we are the ones who betray the Gospel.”

But Pope Francis also told the young people they need to recognize that they, too, are part of the church. Thinking only religious, priests and bishops are the church is “clericalism” and “clericalism is a perversion of the church,” he said.

The best way to respond to a stuffy, lifeless church or to church scandals, the pope told them, “is with witness. If there is no witness, there is no Holy Spirit. The church without witness is just smoke.”

Letizia, 23, told the pope she wanted to be an art historian, but was advised to study economy because it would pay better. Lucamatteo, 20, told the pope dreaming big dreams is frightening, and Martina, 24, said she wants to start preparing for marriage and a family, but everyone seems to think it’s more important to have a career first.

“Dreams are important,” the pope told them. “And the dreams of the young are the most important of all; they are the brightest stars, those that indicate a different path for humanity.”

Of course, he said, dreams must grow, be put to the test and purified. Those worth pursuing — those the Bible would call “great dreams” — always are those that will help others and make the world a better place. “Great dreams include, involve others, reach out, share and generate new life.”

One of the greatest dreams of all, he said, is the dream of finding true love, pledging oneself to another for life and creating a family. It is so important and so holy, he said, that it should never take second place to one’s career.

True love is not simply infatuation, the pope told the young people. It involves giving all of oneself to another; “you have to put all the meat on the grill, as we say in Argentina.”

“To choose, to be able to decide for oneself seems to be the highest expression of freedom,” he said. “And in a certain sense, it is. But the idea of choice we breathe today is that of a freedom without bonds — pay attention to this — without bonds, without commitment and always with some kind of escape route.”

But true joy and happiness come from finding what is most precious, what “is worth saying ‘yes’ to and giving your life to,” the pope said.

The evening ended with a prayer service and the reading of the Gospel story of the apostles running to Jesus’ tomb after Mary Magdalene told them Jesus was no longer there. John arrived first, but waited for Peter before going in, the pope noted in his homily.

Young people should run with the same passion for Jesus, Pope Francis said. “The church needs your enthusiasm, your intuitions, your faith. And when you arrive where we have not yet been, have the patience to wait for us like John waited for Peter before the empty tomb.”

PREVIOUS: World must not forget suffering of Ukraine and its people, says prelate