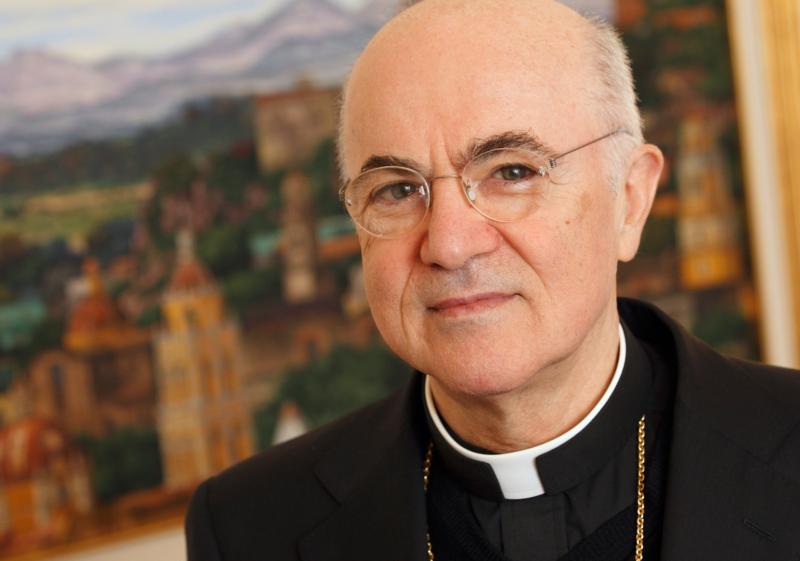 VATICAN CITY (CNS) — A former apostolic nuncio to the United States accused church officials, including Pope Francis, of failing to act on accusations of abuse of conscience and power by now-Archbishop Theodore E. McCarrick.

In an open letter first published by Lifesite News and National Catholic Register Aug. 26, Archbishop Carlo Maria Vigano, who served as nuncio to the United States from 2011-2016, wrote that he was compelled to write his knowledge of Archbishop McCarrick’s misdeeds because “corruption has reached the very top of the church’s hierarchy.”

Archbishop Vigano confirmed to the Washington Post Aug. 26 that he wrote the letter and said he would not comment further. Despite repeated requests from journalists, the Vatican had not responded to the allegations by midday Aug. 26.

Throughout the 11-page testimony, which was translated by a Lifesite News correspondent, the former nuncio made several claims and accusations against prominent church officials, alleging they belong to “a homosexual current” that subverted church teaching on homosexuality.

Citing the rights of the faithful to “know who knew and who covered up (Archbishop McCarrick’s) grave misdeeds,” Archbishop Vigano named nearly a dozen former and current Vatican officials who he claimed were aware of the accusations.

Archbishop Vigano criticized Pope Francis for not taking action against Cardinal McCarrick after he claimed he told the pope of the allegations in 2013. However, he did not make any criticism of St. John Paul II, who appointed Archbishop McCarrick to lead the Archdiocese of Washington and made him a cardinal in 2001.

According to the former nuncio’s testimony, the Vatican was informed in 2000 of allegations that Archbishop McCarrick “shared his bed with seminarians” by two former U.S. nuncios — Archbishop Gabriel Montalvo and Archbishop Pietro Sambi. This corresponds to remarks by Father Boniface Ramsey, pastor of St. Joseph’s Church Yorkville in New York City, who told Catholic News Service earlier in August he had written a letter “and it didn’t seem to go anywhere.”

Archbishop Vigano said that in 2006, as the official in the Secretariat of State that coordinated relations with nunciatures around the world, he sent two memos recommending that the Holy See “intervene as soon as possible by removing the cardinal’s hat from Cardinal McCarrick and that he should be subjected to the sanctions established by the Code of Canon Law.”

“I was greatly dismayed at my superiors for the inconceivable absence of any measure against the cardinal, and for the continuing lack of any communication with me since my first memo in December 2006,” he said.

The former nuncio claimed that Pope Benedict XVI later “imposed on Cardinal McCarrick sanctions similar to those now imposed on him by Pope Francis.”

“I do not know when Pope Benedict took these measures against McCarrick, whether in 2009 or 2010, because in the meantime I had been transferred to the Governorate of Vatican City State, just as I do not know who was responsible for this incredible delay,” he said.

Then-Cardinal McCarrick, he said, “was to leave the seminary where he was living” which, at the time, was the Redemptoris Mater Seminary in Washington, D.C.

Archbishop McCarrick, he added, was also “forbidden to celebrate Mass in public, to participate in public meetings, to give lectures, to travel, with the obligation of dedicating himself to a life of prayer and penance.”

However, no such sanctions, which normally are made public, were announced by the Vatican at the time.

The alleged sanctions, he said, continued to be in effect when Archbishop Vigano became apostolic nuncio to the United States in 2011 and were relayed to then-Cardinal McCarrick.

“I repeated them to Cardinal McCarrick at my first meeting with him at the nunciature. The cardinal, muttering in a barely comprehensible way, admitted that he had perhaps made the mistake of sleeping in the same bed with some seminarians at his beach house, but he said this as if it had no importance,” Archbishop Vigano wrote.

Archbishop Vigano also said that Cardinal Donald W. Wuerl of Washington, D.C., was the first prelate informed of the sanctions against McCarrick. He said he spoke directly to Cardinal Wuerl on several occasions and that Cardinal Wuerl “failed to acknowledge receipt of my two letters, contrary to what he customarily did.”

“His recent statements that he knew nothing about it, even though at first he cunningly referred to compensation for the two victims, are absolutely laughable. The cardinal lies shamelessly and prevails upon his chancellor, Msgr. Antonicelli, to lie as well,” the archbishop wrote.

He apparently was referring to Msgr. Charles V. Antonicelli, vicar general and moderator of the curia. The Washington Archdiocese chancellor is a layman, Kim Viti Fiorentino.

Contacted by Catholic News Service, Edward McFadden, secretary for communications for the Archdiocese of Washington, said: “In spite of what Archbishop Vigano’s memo indicates, Cardinal Wuerl did not receive any documentation or information during his time in Washington, regarding any actions taken against Archbishop McCarrick.”

He also alleged that several U.S. prelates were aware or should have known about then-Cardinal McCarrick’s behavior, including retired Bishop Paul Bootkoski of Metuchen; retired Archbishop John J. Myers of Newark; Cardinal Kevin J. Farrell, head of the Vatican office for laity and family and former auxiliary bishop of Washington, D.C., and Cardinal Sean P. O’Malley of Boston, president of the Pontifical Commission for the Protection of Minors.

Cardinal Farrell told Catholic News Service July 24: “I was shocked, overwhelmed; I never heard any of this before in the six years I was there with him.”

In a June 20 statement, Cardinal Joseph W. Tobin of Newark said: “The Archdiocese of Newark has never received an accusation that Cardinal McCarrick abused a minor. In the past, there have been allegations that he engaged in sexual behavior with adults. This Archdiocese and the Diocese of Metuchen received three allegations of sexual misconduct with adults decades ago; two of these allegations resulted in settlements.”

Cardinal O’Malley has apologized for what he described as an administrative communication failure in which his secretary did not relay to him a 2015 letter from Father Ramsey about allegations against Archbishop McCarrick.

Archbishop Vigano himself has been accused of suppressing an investigation into alleged homosexual activity committed by retired Archbishop John Nienstedt of St. Paul and Minneapolis.

In a 2014 memo to St. Paul-Minneapolis Auxiliary Bishop Lee A. Piche, Father Dan Griffith, a former delegate for Safe Environment for the archdiocese, said the former nuncio’s call to end the investigation against Archbishop Nienstedt and to destroy a piece of evidence amounted to “a good old-fashioned cover-up to preserve power and avoid scandal.”

Archbishop Nienstedt and Bishop Piche resigned in 2015 after the Ramsey County Attorney’s Office filed criminal and civil charges against the archdiocese in its handling of sexual abuse perpetrated by former priest Curtis Wehmeyer in 2008-2011.

This is not the first time that Archbishop Vigano has been openly critical of Pope Francis.

In January, nearly two years after the release of Pope Francis’ apostolic exhortation on marriage and family life, “Amoris Laetitia,” the former nuncio was among several prelates who signed a document criticizing ministry to divorced and civilly remarried Catholics and the possibility that, under some conditions, some of those Catholics could return to the sacraments.

The document claimed the pope’s exhortation caused “ever increasing confusion among the faithful” and stated that the admission of divorced and civilly remarried Catholics is “a discipline alien to the entire tradition of the Catholic and apostolic faith.”

NEXT: Pope says he trusts people to judge archbishop’s claims about him