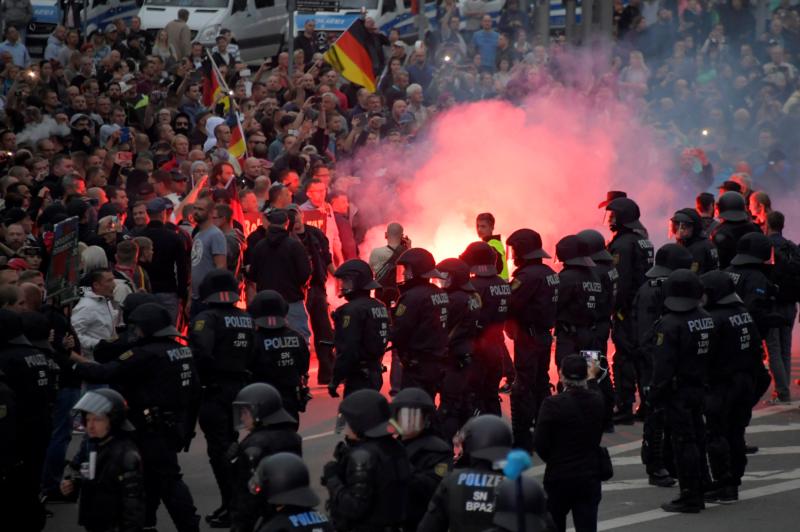 German riot policemen stand guard during a protest Aug. 27 in Chemnitz after a man was stabbed to death. German church leaders condemned anti-immigrant riots in Chemnitz, which erupted after a German man was killed in a brawl with migrants. (CNS photo/Matthias Rietschel, Reuters)

WARSAW, Poland (CNS) — German Catholic leaders condemned anti-immigrant riots in an eastern Germany town that erupted after a German man was killed in a brawl with migrants.

“This deadly stabbing is a criminal offense which needs clearing up and sanctioning by the rule of law. It can never justify xenophobic, inhuman mass demonstrations,” Bishop Heinrich Timmerevers of Dresden-Meissen told KNA, Germany’s Catholic news agency, Aug. 28.

“From a Christian perspective, violence cannot be an answer to violence. An offense must not be utilized to incite anger against entire ethnic groups,” the bishop said.

Riots Aug. 26-27 in Chemnitz left at least 20 seriously injured when police failed to separate 6,000 right-wing protesters from a smaller counter-demonstration.

Meanwhile, the president of the German bishops’ conference urged Christians to counter “nationalism, injustice and the restriction of freedom” with “vigilance and political action.”

“We have to look at how people speak, how some nations fall back into nationalism, and how warlike language is trumpeted again,” Cardinal Reinhard Marx of Munich and Freising said during Mass Aug. 26 in Munich’s St. Kajetan Church, KNA reported.

“As Christians, we know where we have to stand. The Catholic social gospel must be applied to concrete historical times, with its fundamental principles of human dignity, freedom, justice for all and commitment to peace and reconciliation,” Cardinal Marx said.

Police said the riots were sparked when a 35-year-old German was stabbed early Aug. 26 following a street festival in Chemnitz, 120 miles south of Berlin. An Iraqi-born man and a Syrian-born man face charges in connection with the killing.

The riots, which German Chancellor Angela Merkel criticized as “mob-like,” were the latest of several xenophobic incidents mainly in poorer eastern Germany, where the Christian Democrat-led government has been widely criticized for accepting migrants and refugees from war-torn countries in 2015 and 2016.

The rector of Chemnitz’s St. John Nepomucene Church, Father Clemens Rehor, told the Catholic church’s Dom Radio Aug. 28 a much larger right-wing rally had taken place in the city in May, adding that the causes of the latest violence were “not yet fully understood.”

“We are trying to respond, explaining to people they are loved by God and should also love each other, but there are very few Christians here,” Father Rehor said.

“Although there are good initiatives and spiritual communities are doing as much as possible, our 6,000 Catholics have a relatively weak voice in a population of 247,000.”