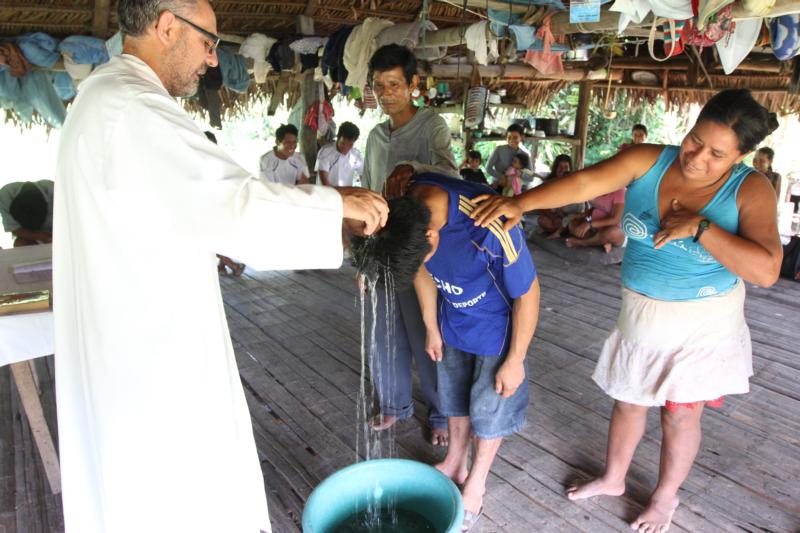 Augustinian Father Miguel Angel Cadenas baptizes a young man in 2014 in a poor section along the Urituyacu River in Peru. (CNS photo/Barbara Fraser)

CARACAS, Venezuela (CNS) — Latin American church leaders will meet in Medellin Aug. 23-26 to commemorate the 50th anniversary of a landmark regional bishops’ meeting that took place in the same city in 1968.

The event will bring together hundreds of Catholic laypeople and religious from the region to reflect on the landmark bishops’ conference that shifted the church’s emphasis to the “preferential option for the poor.”

“This took months of planning, together with several institutional teams from the various organizations,” he said.

Attendees may choose from 22 working groups focused on specific areas of the church’s evangelization in the region, including justice, peace and reconciliation; education; youth; the church and the poor; and mediums of social communication. The congress aims to reflect on the 16 documents produced from the original Medellin conference, which dramatically shifted the church’s focus in region toward the poor majority.

“It was decided that dialogue must start with all of the poor, and that’s why Medellin was so important,” said Father Francisco Hernandez Rojas, regional coordinator of Caritas Latin America and the Caribbean, the umbrella organization for the church’s charitable agencies in the region. “Medellin led us to connect with that impoverished world and learn how to work in those communities.”

For Catholic groups like Caritas, which works directly with the region’s poor, the Medellin conference “established a base of ideas” that continues to influence and inspire their work today, Father Hernandez said.

And the church’s newfound focus on the poorest and societal inequalities was especially pertinent for Latin America, a region that by some accounts remains the world’s most unequal. The decade of the ’60s saw rapid, sustained economic growth around the world, but most of the new wealth in Latin America went to the region’s elite.

The bishops in Medellin concluded that the church must work with the poor for their liberation from poverty, which “opened the horizon for the region,” said Bishop Espinoza.

The official conclusion of the 1968 conference was that the “bishops couldn’t remain indifferent given the tremendous social injustices in Latin America, which keeps the majority of our people in painful poverty, in many cases close to human misery.”

And to commemorate the historic conference, participants in this congress will use the same philosophy of “see, judge, act,” which the bishops used in 1968 for the elaboration of official documents.

Organizers plan to deepen the focus on the poorest in the region and find areas where the 1968 goals have not been met.

“This is a challenge to use the past to go forward, with energy and strength to construct a more promising future,” said Father Hernandez.

Each working group will produce a document analyzing the church’s progress and challenges going forward in their respective areas, using the 1968 conclusions as a guide. From September through December, the documents and commitments they contain will be reviewed, to be published as part of an official report from the congress.

“We want to reflect in the same way that reflection was used in Medellin. It must be a cultural, familial, societal reflection, using as a reference what happened 50 years ago,” said Bishop Espinoza.

PREVIOUS: Vatican wants accountability for abusers, those who protected them

NEXT: Religious groups to fight physical, sexual violence against kids in Peru