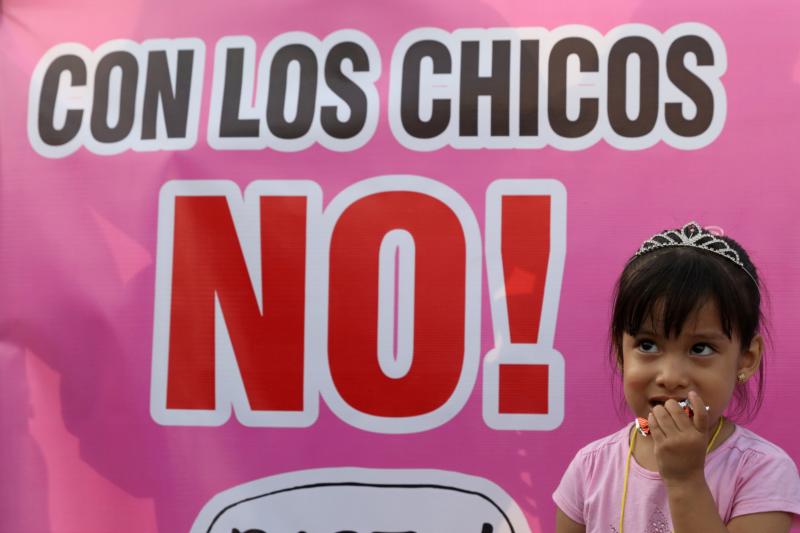 A child stands next to a sign reading “With the Children, No!” during a protest in early February against child abuse and violence in Lima, Peru. (CNS phoito/Guadalupe Pardo, Reuters)

They join interfaith groups in 12 other Latin American and Caribbean countries as part of the Global Network of Religions for Children, working to reduce violence through education in values, prayer and efforts to reduce poverty.

“Every day there is news in the media” about cases of physical and sexual abuse of children, “and there are still unheard stories that have not been addressed,” said Maryknoll Sister Esperanza Principio, a native of the Philippines who now works in Villa El Salvador, a sprawling, low-income district on the south side of Peru’s capital city.

Sister Principio participated in the global network in Panama, where she worked from 2005 to 2012. When she moved to Villa El Salvador last year, she realized that many women, including mothers and grandmothers, were still traumatized by sexual abuse they had suffered as children, often at the hands of relatives.

“They carry it with them all their lives,” she told Catholic News Service.

The Diocese of Lurin, where she works, has a pastoral ministry devoted to the defense of children and adolescents.

In workshops with families and in schools, and even in religious education classes, children and adolescents sometimes approach church workers to talk about abuse they have suffered. The ministers refer cases to government authorities, said Mercedes Tiburcio, who coordinates that ministry at Cristo Salvador Parish in Villa El Salvador.

Studies show that physical punishment is widespread in Peru. A 2015 survey by the government Ministry of Women and Vulnerable Populations found that 73 percent of children between ages 9 and 11 and 80 percent of 12- to 17-year-olds had been victims of violence, and one-third of those in the older group had suffered sexual violence.

The study in Peru found that nearly one-third of adults believe it is good to use physical punishment, mainly because their own parents and grandparents did the same.

About two out of five adults believe that children who are not punished physically become lazy and disobedient. The same percentage sees no problem with corporal punishment as long as it does not result in visible injuries to the child.

Children apparently absorb those attitudes, as two out of five in that survey said they deserve physical punishment if they misbehave or fail to do their homework.

Sexual abuse is the most dangerous form of physical violence, and cell phones and social media make it easier for predators to groom children for sexual abuse or trafficking, Ricardo Valdes, executive director of the nonprofit organization Capital Humano y Social Alternativo, said at the launch of the Peru chapter of the global network.

Parents and children are often unaware of the risk of meeting sexual predators through social media, Valdes said. Adolescents sometimes approach his organization for help when they realize they have been trapped.

Methodist Bishop Samuel Aguilar called for families, churches, schools and other places frequented by children and adolescents to become “sanctuaries of safety,” where people are trained to protect children.

“Many acts of violence occur in places that should be sanctuaries,” Bishop Aguilar said. “We need a change in attitudes and in the way in which adults relate to children and adolescents.”

The interfaith program in Peru was launched just two days after a grand jury in Pennsylvania issued a blistering report on sexual abuse by priests in six dioceses.

The same day that report was issued in the United States, police in Chile searched the offices of the Chilean bishops’ conference, seeking documents related to sexual abuse charges that led all the country’s bishops to submit their resignations to Pope Francis.

Asked how churches could speak credibly about sexual abuse in light of those and other cases, Bishop Aguilar urged churches to adopt and implement codes of conduct for their members and pastoral workers.

“The issue of sexuality has been taboo in churches,” said Mercedes Roman, a former Maryknoll lay missioner who serves as adviser to the Global Network of Religion for Children in Latin America and the Caribbean.

Teaching children about sexuality “is the first step toward protection,” she said.

Studies show that breaking the cycle of physical and sexual violence that repeats from one generation to the next can reduce adolescent pregnancy rates and decrease health problems in adults.

“It’s a challenge for us as faith communities,” Sister Principio said.

NEXT: Changing the world requires action, not dreaming, cardinal says