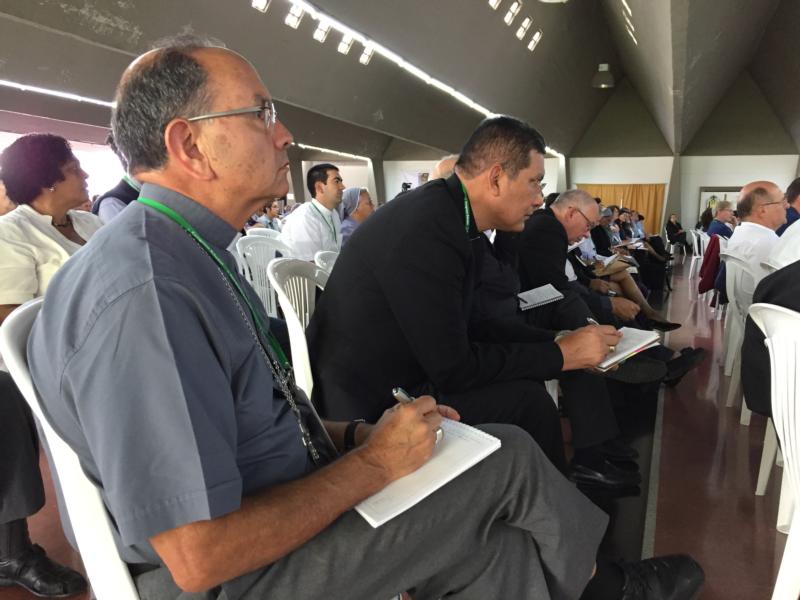 MEDELLIN, Colombia (CNS) — The Catholic Church in Latin America must return to the principles of a 1968 conference that shifted the church’s emphasis toward the poor majority, said participants in a four-day meeting in Medellin, Colombia.

“If we don’t capture the spirit of” the landmark regional bishops’ meeting that took place in Medellin 50 years ago, “this congress (would) become a mere protocol event,” said Jesuit Father Pedro Trigo, a Venezuelan theologian.

Participants in the Aug. 23-26 congress focused on how to build a future for the church in the region using the ideas of the original Medellin meeting as a guide. The role of the laity and youth in the church, vocations and the environment were among topics discussed.

Church leaders must shift their focus toward the younger generations to prevent the current trend of a church that “every day becomes older,” said Marist Brother Afonso Murad, a Brazilian theologian. The church must send young seminarians and newly ordained priests to the places where young people gather, he said.

The laity’s role in the church must grow, with a focus on catechesis, he said.

The church “must prioritize missions and not institutional interests,” Brother Murad said, noting that the 1968 conference achieved a balance between pastoral and other elements of the church.

Father Augusto Zampini Davies, a priest of the Diocese of San Isidro, Argentina, said the environment is being destroyed by uncontrolled development in Latin America, and its preservation must be kept in mind when considering the future of the church in the region.

Father Zampini Davies, who works at the Vatican Dicastery for Promoting Integral Human Development, was among conference participants who spoke of a Latin American “paradox” in the region that has the world’s largest number of Catholics and yet is the most violent and least ecologically responsible.

“In 50 more years, I would love to call Latin America the most Catholic region and the least violent, and the most ecological,” he said, noting that “to promote integral development, the environment must be included.”

All future efforts must use the ideas in these documents of a church for the poor and by the poor as their underlying structure, said Maria Clara Lucchetti Bingemer, a Brazilian theologian and academic at the Pontifical Catholic University of Rio de Janeiro.

The leadership and responsibility shown at the 1968 meeting should be imitated, she said. “The Latin American church stopped being just a reflection of the church in Europe … and became its own fountain of ideas,” Bingemer said.

The ideas developed there profoundly influenced Pope Francis’ pastoral teaching “and when he speaks today of the joy of evangelization, he is saying that working with the poor is how we see the face of God,” she said.

The conclusions reached at this congress will have an impact on the U.S. church, particularly because many Catholics from the region move to the United States, said Auxiliary Bishop Eusebio L. Elizondo of Seattle.

“To me, one of the big challenges in the United States is that the church is very established, it’s an institution that’s very structured,” he said. People from Latin America “have a way to adapt and piety that is spontaneous, and so it’s a challenge to our structures.”

Each of the 22 working groups at the congress produced a document analyzing the church’s progress and challenges going forward, using the 1968 conclusions as a guide. From September through December, the documents and commitments they contain will be reviewed, to be published as part of an official report from the congress.