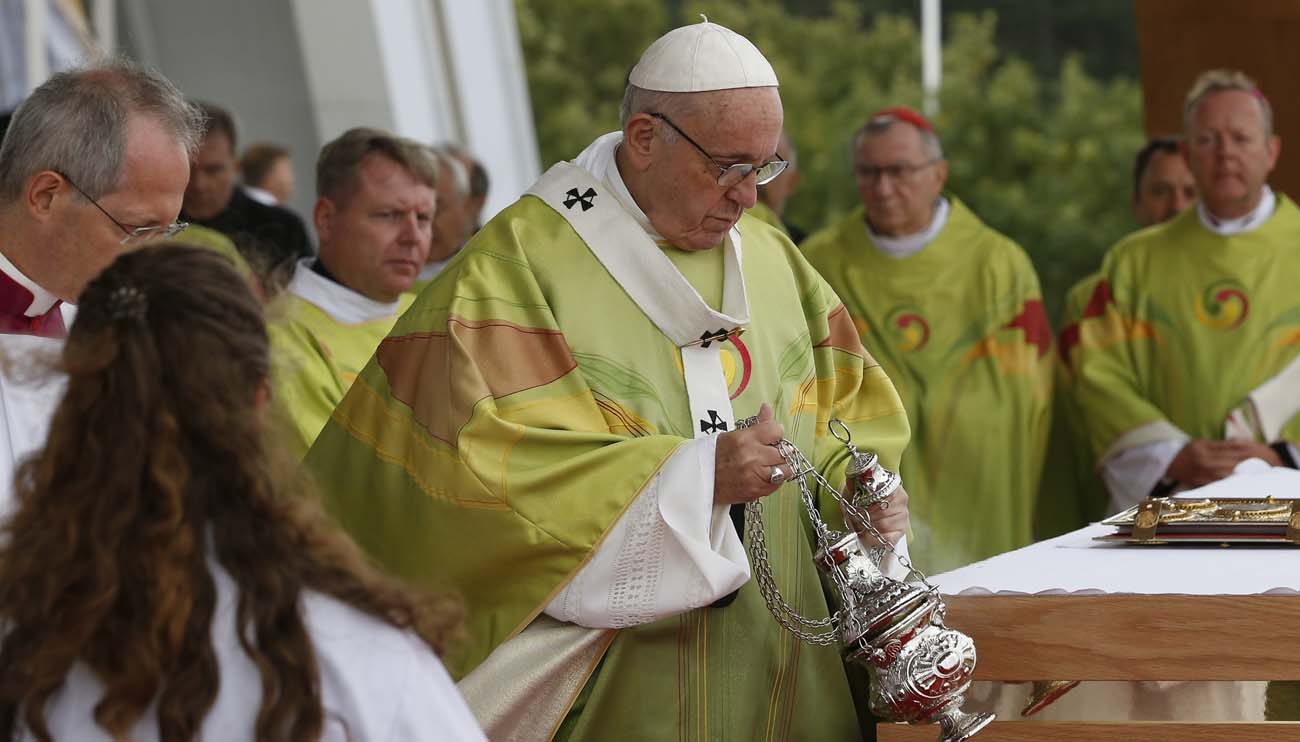 DUBLIN (CNS) — Before celebrating Mass in a Dublin park, Pope Francis solemnly asked forgiveness for the thousands of cases of sexual and physical abuse perpetrated by Catholics in Ireland.

In a litany of recognition and prayers for the Lord’s mercy, Pope Francis formally asked forgiveness for the forced labor that even children were forced to perform in church institutions.

And, responding to a request made by two survivors he had met Aug. 25, the pope asked forgiveness for all the babies taken from their unwed mothers and put up for adoption without their mothers consent.

The mothers were told later it would be a “mortal sin” for them to try to find the children, but the pope said explicitly: “It is not a mortal sin. It is the Fourth Commandment,” which states, “Honor your father and your mother.”

“We apologize for some members of the hierarchy who did not own up to these painful situations and remained silent,” he said. “We ask for forgiveness.”

The pope’s penitential plea followed the introductory remarks of Archbishop Diarmuid Martin of Dublin, who told the pope, “The Church in Ireland has gone through challenging times. People have been wounded in the depth of their being by church people; people’s faith has been challenged and the church of Jesus Christ has been wounded.”

“Faith in Ireland is strong,” he said, and “faith in Ireland is fragile,” but that is not necessarily a surprise. “There is an intrinsic fragility in faith can steer us away from arrogance and self-centeredness.”

The Mass was the official closing of the World Meeting of Families, and Pope Francis used his homily to urge families from around the world to harness their joy and use it to transform the world into a place where all people feel loved, welcomed and supported in their commitments to each other.

“The church as a whole is called to ‘go forth’ to bring the words of eternal life to all the peripheries of our world,” the pope told tens of thousands of people gathered in a slightly sodden Phoenix Park.

A view of the crowd from the altar was that of a mosaic of brightly colored rain gear flapping in the wind. But even close to the altar platform there were large open spaces set aside for people who never arrived.

At the end of his homily, Pope Francis urged each person present — “parents and grandparents, children and young people, men and women, religious brothers and sisters, contemplatives and missionaries, deacons and priests” — to share “the Gospel of the family as joy for the world!”

The Catholic teaching on marriage and family life is often challenging and not universally accepted, he said, but Jesus himself promised that his words “are spirit and life.”

In fact, he said, it is the Holy Spirit who “constantly breathes new life into our world, into our hearts, into our families, into our homes and parishes. Each new day in the life of our families, and each new generation, brings the promise of a new Pentecost, a domestic Pentecost, a fresh outpouring of the Spirit, the paraclete, whom Jesus sends as our advocate, our consoler and indeed our encourager.”

The world needs such encouragement, the pope said, and laypeople in families are the best ones to give it.

In St. Paul, in his Letter to the Ephesians, describes marriage as “a sharing in the mystery of Christ’s undying fidelity to his bride, the church,” he said. “Yet this teaching, as magnificent as it is, can appear to some as a ‘hard saying.’ Because living in love, even as Christ loved us, entails imitating his own self-sacrifice, dying to ourselves in order to be reborn to a greater and more enduring love.”

That self-giving love, he said, is the only thing that “can save our world from its bondage to sin, selfishness, greed and indifference to the needs of the less fortunate.”

Self-giving love is what Christians learn from Jesus. Self-giving love “became incarnate in our world through a family,” he said, and “through the witness of Christian families in every age it has the power to break down every barrier in order to reconcile the world to God and to make us what we were always meant to be: a single human family dwelling together in justice, holiness and peace.”

Pope Francis said participants, filled with enthusiasm after the World Meeting of Families, also need to “humbly acknowledge that, if we are honest with ourselves, we, too, can find the teachings of Jesus hard.”

For instance, he said, “how difficult it is always to forgive those who hurt us; how challenging always to welcome the migrant and the stranger; how painful joyfully to bear disappointment, rejection or betrayal; how inconvenient to protect the rights of the most vulnerable, the unborn or the elderly, who seem to impinge upon our own sense of freedom.”

But that is when Catholics must affirm that they believe and will follow the Lord, Pope Francis told them.