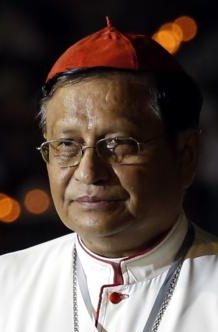 The Catholic Church should never compromise its fundamental belief in the right to life, including on the issue of capital punishment, Cardinal Bo said in a statement released Aug. 10, ucanews.com reported.

“Even those who committed heinous crimes do have a right to life,” he said.

The cardinal said Pope Francis’ announcement Aug. 2 on the issue was an affirmation of the church adopting a moral stance. The pope announced a change in the Catechism of the Catholic Church, which previously accepted the death penalty as a “last recourse.”

The new text acknowledges that the “dignity of a person is not lost even after the commission of very serious crimes.”

Pope Francis maintains the death penalty is fundamentally against the teachings of Jesus because it excludes the possibility of redemption, does not give justice to victims and feeds a mentality of vengeance.

Cardinal Bo, 70, elaborated that human slavery, discrimination and violent conflicts, as well as the abuse of women and children in the sex industry, could constitute a form of death sentences for victims.

He also suggested that martial arts such as kick boxing unreasonably give rise to the legitimization of violence as sport and entertainment.

Civilized societies must move away from sports that provoke violent behavior, especially in children, and could indirectly lead to mass killings, Cardinal Bo added.

The prelate said the courageous position adopted by Pope Francis against capital punishment should inspire governments and civil society groups worldwide to strive for the banning of dangerous sports as well as curtailing “incremental death sentences” through victimization.