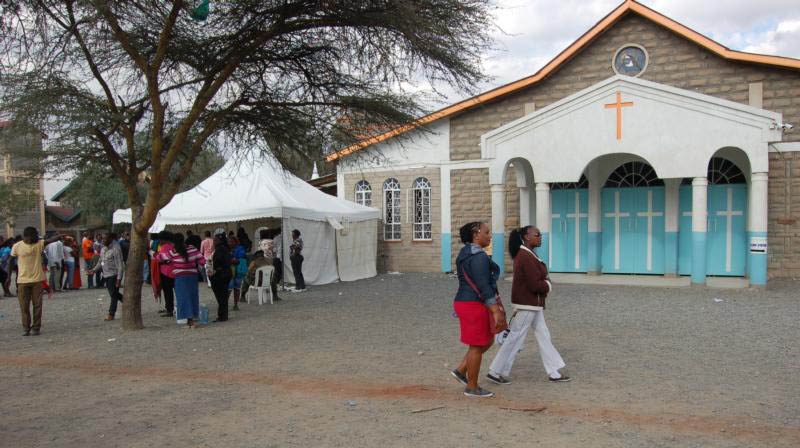 People gather outside St. Monica Church in Kitengela, Kenya, Aug. 8, 2017. Some priests who are serving in the Roman Catholic Church said the issue of celibacy still was a great challenge to many clergy in Kenya and around the world. (CNS photo/Fredrick Nzwili)

NYERI, Kenya (CNS) — When the Rev. Peter Njogu was ordained a Catholic priest in 1989, he had made up his mind to be celibate for the rest of his life and serve God. But little did he know that 13 years later, all of that would change.

In 2002, Rev. Njogu was charged by the Diocese of Nyeri of having a girlfriend, whom he had met while serving in Italy. He fervently denied the allegations, though he now admits it was true.

Rev. Njogu was formally excommunicated by the Vatican months later and joined the Renewed Universal Catholic Church as a bishop after being consecrated by former Zambian Archbishop Emmanuel Milingo. The splinter church at odds with Rome allows priests to marry and continue ministering. Rev. Njogu later married Berith Karimi Njogu, his longtime girlfriend.

Rev. Njogu has since been meeting with priests at the Christ the King Major Seminary in Nyeri and across the country to urge them to abandon priestly celibacy, join the splinter group and get married if they desire.

“I tell them to live their own lives because celibacy is not biblical and it does not sanctify priesthood,” said the 55-year-old father of three who is also a lecturer at Kenyatta University in Nairobi. “There is a huge difference between celibacy and a call to priesthood. Priestly celibacy should be made optional to encourage more young people to join priesthood.”

Rev. Njogu said he decided to start an alternative Catholic church to help priests to stop sinning because most “were tired of pretending.”

“I know many priests and bishops with girlfriends because they are my friends,” he said. “Some even have secret families or children they have abandoned because they fear being excommunicated from the church. Others are abusing children.”

The debate on celibacy for Catholic priests was reignited last year by Pope Francis when he told a German newspaper that he was ready to study exceptions to the church’s celibacy rule especially in isolated communities where there is a shortage of clergy. But the pope ruled out making celibacy optional.

However, this has not stopped priests from abandoning their call to serve in ministry and get married.

Recently, three married priests who had earlier been in the mainstream Catholic Church were ordained for service in the splinter church by Rev. Njogu, now an archbishop in his church.

The Rev. Mathew Theuri, 70, said he was tired of pretending to be celibate and decided to marry to save his family, which he was hiding for fear of excommunication. He now openly lives with his family and he said he can freely serve God.

“I decided to get married because I didn’t want my children to continue suffering. I’m happy because I have been given another chance to serve God,” he said.

Some priests who are still serving in the Roman Catholic Church said the issue of celibacy still was a great challenge to many clergy in Kenya and around the world. One priest who asked not to be named said if given another chance, many priests would choose to marry and at the same time serve God.

“It’s a challenge to us, but we keep on praying,” he said. “Many priests desire to have families and children of their own but they are unable to do so. Some even regret getting into priesthood and others still go ahead and marry secretly.”

However, Bishop Philip Anyolo of Homa Bay, Kenya, chairman of the Kenya Conference of Catholic Bishops, said the church was not threatened by the few defectors. He reminded priests to remember what they have been called to by God.

“We are not worried at all. They are now not Catholic priests and they can go ahead and do whatever they want. But once you are a Catholic priest, there are rules to follow,” he said.

“The priests should remember that they were called by God for a special mission and they should focus on that and pray hard as they search for holiness,” he added. “No one can serve two masters. Either you will hate the one and love the other, or you will be devoted to the one and despise the other.”

Rev. Njogu dismissed Bishop Anyolo’s comments, saying many priests have been calling him expressing interest in joining the Renewed Universal Catholic Church. He said some of the men he has spoken with were afraid to leave the Roman Catholic Church because of the privileges that come with priesthood such as good housing, vehicles and job security.

“I have met many priests who are willing to join us and I will be welcoming them soon,” he said. “Many continue to live in denial. It’s un-Godly to deny fathers their rights and soon they will be coming to my church.”

Bishop Anyolo denied saying that, “priests are not willing to abandon the celibacy life because they know they have been called by Jesus Christ to serve.” The bishop, however, wished well all those who were willing to leave saying, “we instead pray for them wherever they go to live dignified and righteous lives.”