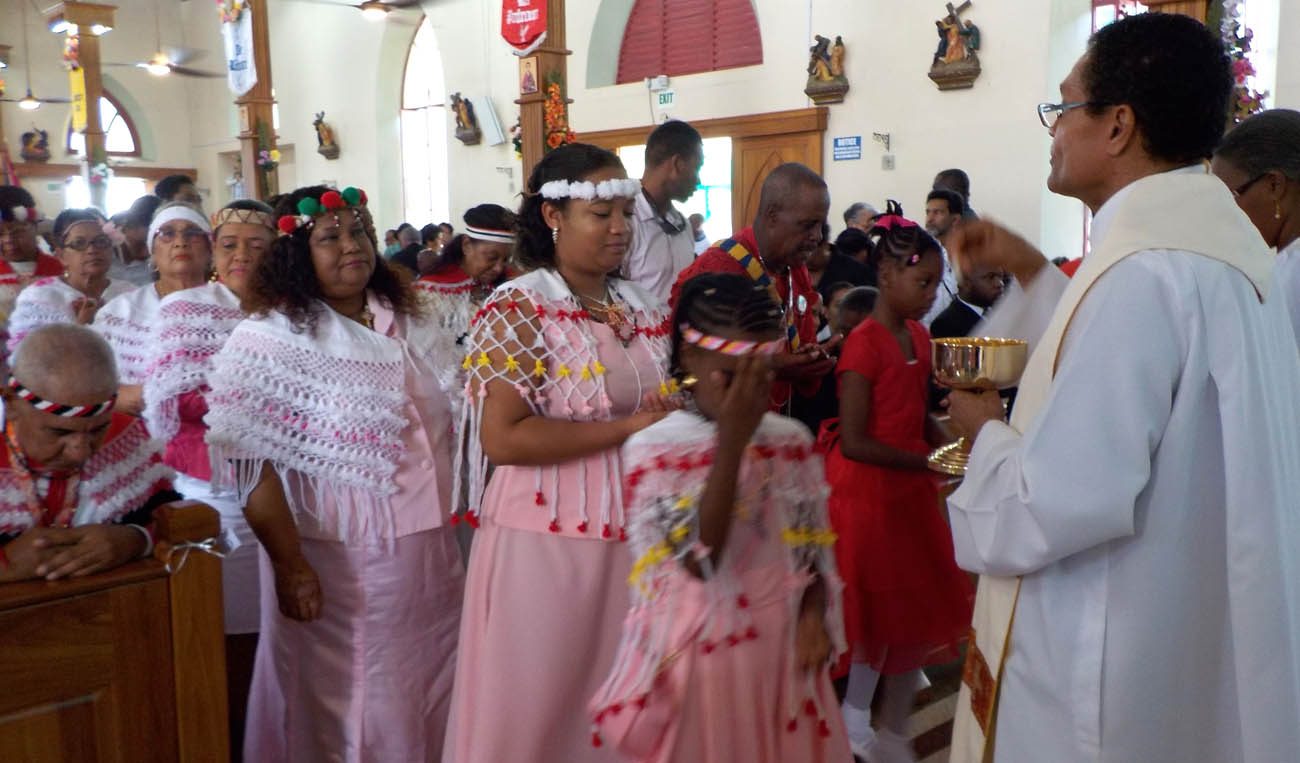 Members of the First Peoples community receive Communion from Father Elveau Augustine Aug. 25 at St. Rose of Lima Church in Arima, Trinidad. Father Elveau, who was visiting from the island of Dominica, has ministered for decades to the Kalinago tribes on that island. (CNS photo/Laura Ann Phillips)

ARIMA, Trinidad (CNS) — Past small family-owned businesses and homes tightly packed into well-worn streets, a procession of just over 300 St. Rose of Lima devotees snaked through the semi-rural borough of Arima, 45 miles southeast of the capital.

In its middle, a five-foot statue of the saint rode, elevated on a wooden, rose-framed litter at the back of a flatbed truck. For centuries, St. Rose has been a bridge between the Catholic Church and Trinidad’s First Peoples — an assortment of Amerindian tribes that inhabited the island for at least 6,000 years before Christopher Columbus stumbled upon them in 1498.

A wizened woman, a blend of East Indian and one of the nearly disappeared Amerindian tribes, walked in front of the saint-bearing truck as closely as the safety marshals allowed, holding aloft a matte-cream, plastic vase crammed with oversized pale pink artificial blooms.

Several names, neatly handwritten in fine black marker, covered the vase’s surface: people alive and dead for whom she needed the saint’s favors. When the statue was returned to its home in the St. Rose Parish Church, that vase was the first to be ensconced at the saint’s feet.

“Santa Rosa is like mother to them,” explained First Peoples Chief Ricardo Bharath Hernandez. “The faith and devotion people have placed in this saint has worked miracles for them.”

Devotion some find objectionable, since Catholicism was brought by the Spanish, who decimated most of the island’s indigenous tribes.

The Spanish didn’t settle in Trinidad until 1592. About 40,000 indigenous people of varying tribes lived on the island, and there was light trading and a tenuous peace for some time. But, when Spain’s encomienda system was introduced around 1644, Amerindian labor was seized.

The Nepuyo tribe of Arima mounted the strongest resistance, their Chief Hyarima leading a force effective enough to slow Spanish occupation of the island’s north for decades.

Some Amerindians, though, were converted early by the Capuchins who staffed missions erected throughout the island, each dedicated to a particular saint; Arima’s was dedicated to St. Rose. The newly baptized doffed their traditional names for that of their estate owner or the baptizing priest. This is why so many local Amerindian descendants carry Spanish names, said Hernandez. Records recovered from the missions have helped some people trace their tribal roots.

Still, it is nearly impossible to find pure-blooded descendants of any of the original tribes today; some think none exist. What was left of them dissolved, over the centuries, into Trinidad’s myriad ethnicities.

Some find it difficult to wholeheartedly embrace the Catholic Church and its practices. Others find power in both.

“My Lord and my savior is Jesus Christ, his son, and that will never change,” said Hilary Bernard, a dentist and First Peoples descendant.

In First Peoples’ prayer, she noted, “The name Tamushi is given to almighty God. It’s Taino, which is one of the Arawak languages, and it means, ‘creator of the universe’, ‘almighty God.'”

Bernard is also a member of the Catholic charismatic prayer group that’s heavily involved in youth ministry and social outreach.

“There’s no separation for me, really. There’s nothing to reconcile.”

The First Peoples’ “commitment to prayer and allowing prayer to transform and inform their lives is a very important thing,” said Msgr. Christian Pereira, a former St. Rose parish priest for several years.

“They have a very deep relationship to the earth and the universe, which is their essential relationship of the Divine Spirit of the Holy One.”

Western religions have allowed themselves to “become divorced from the universe,” Msgr. Pereira said. “Pope Francis has tried to pull us back in “Laudato Si’,” to remind us that the (Creator is present in all elements of the) earth, and the universe is the seat of the Creator.”

The Amerindian devotion to St. Rose can be traced to a 17th-century legend which some call a miracle, others the oppressor’s cunning.

Amerindian hunters were in the hills and found a girl alone there. She was dumb, so they took her back to the village. That night, she disappeared, but she was found again in the forest the next day. They brought her back to the settlement, but she disappeared that night, too. The next day, when she was found, the people took her to the mission priest. He told them the mysterious girl was the manifested spirit of St. Rose and, after that night, would not return. Sure enough, the girl was never seen again.

The daughter of Chief Hyarima later became Catholic, followed by many of their peoples. The First Peoples’ Carib queen, the community’s titular head throughout the years, is said to be her descendant.

“Now, there are oral traditions, and there is the practical thing,” stated Chief Hernandez, “because there are similar stories in other indigenous communities of the region where the Catholics took possession.”

Still, he defends his community when their devotion to the saint and Catholicism are criticized by internal and external groups.

“I tell them we must remember that, for over 200 years, this has become part of the people’s tradition and culture,” said Hernandez. “The Santa Rosa festival allowed them a space to practice their indigenous culture.”

For more than 230 years of the feast’s celebration, following the Mass and procession, all assembled at the park in front of the church, where the First Peoples share their traditional dances, rituals, food, games and craft. Today, it is a modest food and craft operation run jointly by the parish and First Peoples with a more modern lean.

Still, their community’s festival preparations are robust. On Aug. 1, a conch shell — the shell of a large ocean mollusk — is blown, a religious ceremony performed in the hills, and cannons fired. During the weeks following, the women prepare decorative roses, buntings and flags, with separate duties for the men. The community also participates in the parish novena.

“The First Peoples existed long before Jesus Christ was born,” said Msgr. Pereira. “They hold the presence of the Great Spirit in nature all around them in reverence and, to this day, recognize God’s presence in wider creation, as well as the particular presence of God in the person of Jesus Christ in our Catholic Church.”

PREVIOUS: Pope says he trusts people to judge archbishop’s claims about him