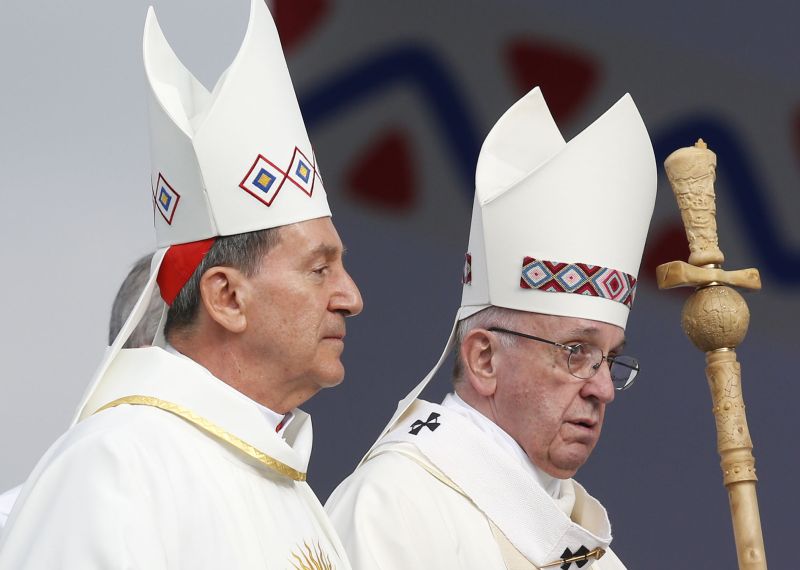 Pope Francis walks with his crosier next to Colombian Cardinal Ruben Salazar Gomez of Bogota as he arrives to celebrate Mass at Simon Bolivar Park in 2017. (CNS photo/Paul Haring)

WASHINGTON (CNS) — The Catholic bishops of Latin America pledged their loyalty to Pope Francis and spoke against the “shameful” way he has been attacked, said the president of the Latin American bishops’ council during an Aug. 26 Mass in Medellin, Colombia.

The group, known as CELAM for its acronym in Spanish, was commemorating the 50th anniversary of a regional meeting of bishops that took place in Medellin in 1968 and drew the Catholic Church in the region closer to the poor of Latin America and to work toward dismantling poverty and its ailments.

The news agency AICA of Argentina reported that Cardinal Ruben Salazar of Bogota, head of CELAM, said that just as the movement focused on the poor that sprang out of Medellin in the late 1960s had once been attacked, now the attacks are focused toward those who embraced it, such as Pope Francis.

“If at that time they attacked the institution, today they attack the person,” Cardinal Salazar said, according to AICA.

The news agency said the comments made during the closing Mass also were later supported in a statement by the humanitarian agency Caritas Latin America, the Archdiocese of Medellin, and the Confederation of Religious in Latin America, known as CLAR. All four groups sponsored the congress marking 50 years since the Second General Assembly of the Bishops’ Conferences of Latin America and the Caribbean in Medellin.

The pope’s ministry has been attacked, as well as the pope as a person, “we could almost say in a shameful way,” said Cardinal Salazar.

When Latin American bishops approved documents expressing their concerns on religious, socioeconomic and political conditions in Latin America and how they were detrimental to the poor back in the 1960s, many, including in the church, attacked them as being political and leftist. But they have maintained over the years that they follow a Gospel that teaches the church to care for the poor because that is what Jesus taught.

NEXT: Vocations in Ireland have dwindled due to abuse scandal, pope says