Cardinal to meet with pope to discuss resignation as Washington archbishop 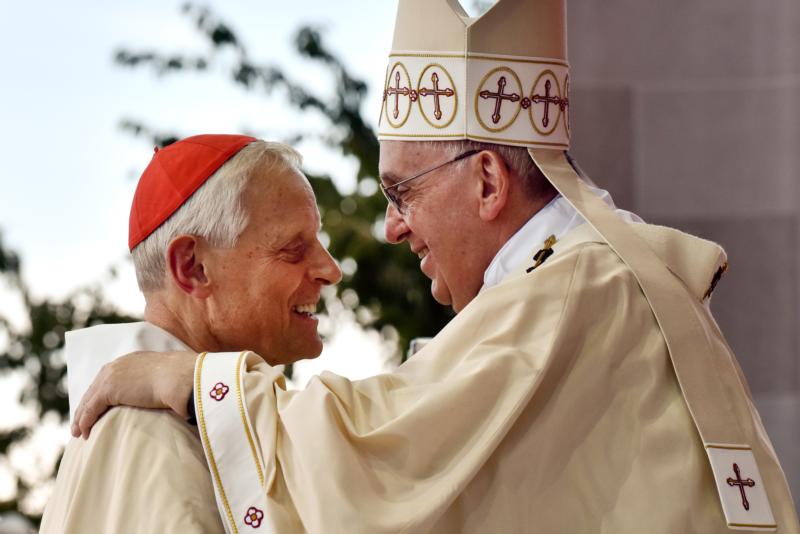 Pope Francis greets Washington Cardinal Donald W. Wuerl during a Mass in 2015 outside the Basilica of the National Shrine of the Immaculate Conception in Washington. Cardinal Wuerl announced Sept. 11 that he will meet soon with Pope Francis to discuss the resignation he submitted three years ago when he turned 75. (CNS photo/Matthew Barrick)

UPDATED – WASHINGTON (CNS) — Cardinal Donald W. Wuerl of Washington has told the priests of the archdiocese that he will meet soon with Pope Francis to request that he accept the resignation the cardinal submitted three years ago when he turned 75.

The cardinal said this meeting is one part of a two-fold response he has concluded is the best way to serve the church as it moves into the future. The second is to participate in a process of healing for all those who have suffered abuse.

The cardinal made the comments in a letter sent the evening of Sept. 11 to the priests of the archdiocese. He recently met and prayed with the clergy to discuss and discern his leadership.

Cardinal Wuerl said he would meet with the pope in Rome “so that this archdiocesan church we all love can move forward.” He cited a need to “bring healing and a new beginning at the service of this church.”

The cardinal submitted his letter of resignation to Pope Francis Nov. 12, 2015, when he turned 75, as required by canon law, but the pope has not yet accepted it. The cardinal turns 78 this year.

“It was clear that some decision, sooner rather than later, on my part is an essential aspect, so that this archdiocesan church we all love can move forward,” the cardinal said in his letter.

Cardinal Wuerl said this action is a “fruit of our discernment” following the prayers and discussion that he held with priests of the archdiocese at a Labor Day gathering.

He noted that before that gathering, the pope had asked him to meet with his priests “to discern the best course of action for me to pursue as we face new revelations of the extent of the horror of the clergy abuse of children and the failures in episcopal oversight.”

Cardinal Wuerl has been under heavy criticism following the release of the Pennsylvania grand jury report in mid-August that detailed sexual abuse that more than 1,000 survivors alleged they suffered at the hands of 300 priests and other church workers over the past seven decades in six dioceses in that state.

The dioceses included Pittsburgh, which was headed by then-Bishop Wuerl from 1988 until he was named archbishop of Washington in 2006.

After the grand jury report was issued, Cardinal Wuerl expressed sorrow for the suffering of abuse survivors, and he also defended his record in Pittsburgh, saying he reached out to survivors there, removed all priests credibly accused of abuse from parish ministry, and enacted strong child protection measures.

Afterward, protesters gathered outside St. Matthew’s Cathedral after the cardinal celebrated a recent Mass there, and a group of teachers demonstrated outside the Basilica of the National Shrine of the Immaculate Conception following the archdiocese’s opening school Mass. Some protesters called for Cardinal Wuerl’s resignation.

In June, it was announced that former Washington Archbishop Theodore E. McCarrick had been credibly accused of abusing a minor nearly 50 years ago when he was a priest of the Archdiocese of New York, and that settlements had been made in the New Jersey in the Newark Archdiocese and the Metuchen Diocese, where he had earlier served as archbishop and bishop, respectively. The settlements were related to his alleged sexual misconduct with seminarians.

Cardinal Wuerl has said that he was not aware of any earlier sanctions imposed on then-Cardinal McCarrick, whose resignation from the College of Cardinals was accepted by Pope Francis July 28.

In his Sept. 11 letter to the archdiocese’s priests, Cardinal Wuerl said, “At issue is how to begin effectively to bring a new level of healing to survivors who have personally suffered so much and to the faithful entrusted to our care who have also been wounded by the shame of these terrible actions and have questions about their bishop’s ability to provide the necessary leadership.”

Cardinal Wuerl concluded his letter by noting that he intended to meet in the very near future with Pope Francis “about the resignation I presented nearly three years ago.” The cardinal added, “Our discernment here, I believe, has indicated the way forward to bring healing and a new beginning at the service of this church.”

In an earlier letter to priests, Cardinal Wuerl said that he will celebrate a Sept. 14 Mass at St. Matthew’s Cathedral to initiate a six-week “Season of Healing” in the Archdiocese of Washington. The cardinal’s Sept. 11 letter was shared so that this Mass would not be overshadowed by questions about his status.

In his previous letter, the cardinal encouraged parishes to unite in prayer in whatever way they found to be appropriate, and he said that resources would be provided to help bring healing to abuse survivors and to parishioners wounded by the church’s sex abuse scandals.

“This is just a beginning,” he said in that letter. “The work of healing must and will continue. This special time is intended to call attention to our need to pray and to reach out to survivors throughout the year.”

Editor’s Note: The text of Cardinal Wuerl’s Sept. 11 letter to priests of the archdiocese can be found here.

NEXT: New Baltimore Catholic school to be named in honor of Mother Lange