Catholics join other Christians in calling for admitting more refugees 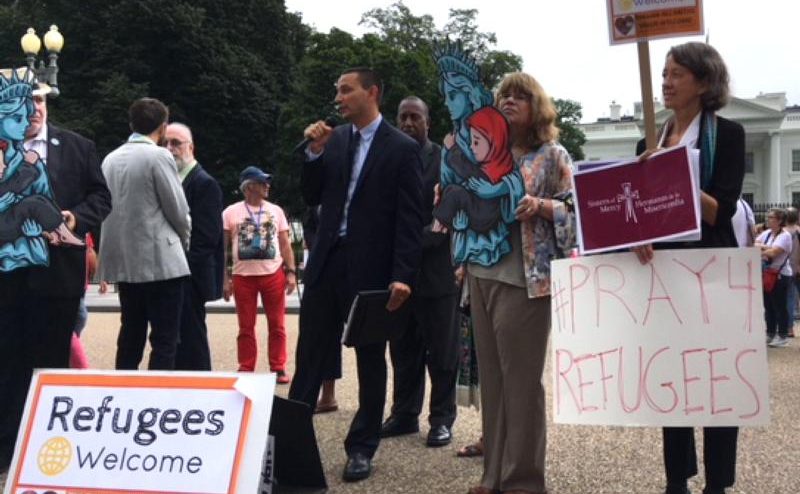 Catholics join other religious organizations and groups near the White House in Washington Sept. 12 urging the administration to allow 75,000 refugees into the country next fiscal year. (CNS photo/Rhina Guidos)

WASHINGTON (CNS) — Christians in the U.S. have taken the Trump administration to task for a dramatic drop in the numbers of persecuted Christian and other refugees being admitted into the country, even though administration officials promised last year to help.

While administration officials vowed on several occasions to help Christians in the Middle East facing what Vice President Mike Pence last year called an “exodus” from their ancestral lands, U.S. Christian groups trying to help them condemned the dramatic drop of refugees the Trump administration allowed into the United States last year and this year.

The Refugees Council USA said in a statement that policies “clearly aimed at Muslim refugees, ensure that Christians and other religious minorities from many of the countries on Trump’s list of suspect travel ban nations are also kept out. It suggests that the president has no real interest in religious persecution or the tenets of religious freedom.”

The U.S. Department of State recently released figures showing that 14,289 Christian refugees were admitted in 2018 compared to 25,162 the previous year.

Catholics joined a chorus of pleas by religious groups urging the administration to increase not just the number of Christian refugees but the number of people in general allowed to seek refuge in the U.S. On Sept. 12, they joined other groups outside the White House asking the administration to allow 75,000 refugees into the country next fiscal year.

“It is shameful that we even have to be pleading for a refugee admission goal of 75,000 for this next (fiscal year), when the United Nations reports that there are more refugees in the world today than at any other time since World War II — over 60 million. Other countries are taking in hundreds of thousands (of refugees), while our country is dismantling its refugee program,” said Jean Stokan, of the Sisters of Mercy justice team, in an email to Catholic News Service Sept. 13.

Stokan attended the Sept. 12 event outside the White House.

“We pray for the soul our country and the anti-refugee, anti-immigrant sentiment that is being fanned by those who want to divide us, rather than see our oneness as a human family,” she said.

In a joint news release, representatives from several faith-based groups denounced the administration for setting the goal of allowing 45,000 refugees in last year, and admitting less than half. The groups included the Christian Church (Disciples of Christ), Presbyterian Church USA, United Church of Christ, the General Board of Church and Society of the United Methodist Church, Franciscan Action Network, Sisters of Mercy-Justice Team and the United Methodist Committee on Relief.

They said they worry that next year that bar will be set even lower, allowing for 25,000 or fewer refugees into the U.S. for fiscal year 2019.

Patrick Carolan, executive director of the Franciscan Action Network, also attended the Sept. 12 event, and said in a statement that the most fundamental principle of Catholic social teaching is the value and dignity of all creation.

“As people of God, we have a shared responsibility to care for all our brothers and sisters,” he said.

Stokan, of the Sisters of Mercy, said those who attended from the religious order, one founded by immigrants to the U.S., “are here today to demonstrate our solidarity with refugees, and also to call on the president and U.S. policymakers to have compassion, and to remember the founding principles on which our country was found.”

Though violence or poverty fan some of the current waves of immigration, “we also have to look at how the last decades of failed U.S. economic and military policies have created the very conditions why people are fleeing,” she said.

NEXT: Kurtz: U.S. society ‘much richer’ when church, government work together