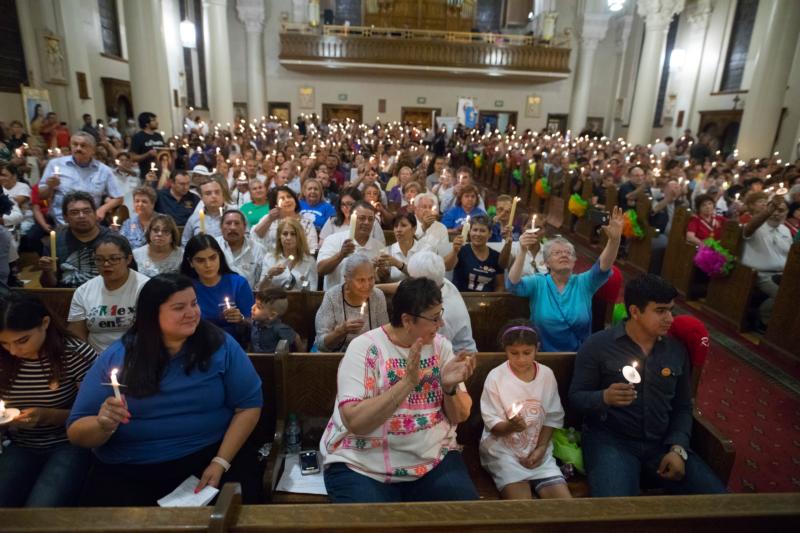 BELLEVILLE, Ill. (CNS) — The hardships of families detained at the U.S.-Mexican border can seem far away and out of touch from our daily lives — even in southern Illinois, which has its share of Mexican immigrants living and working in the area.

But a priest of the Belleville Diocese who visited the troubled border region in early September said the struggle is as near as Pulaski County, where a few hundred immigrants in the country illegally are being held in a Department of Homeland Security detention center.

And it’s as relevant as the Gospels, said Father Bob Flannery, pastor of St. Francis Xavier Parish in Carbondale.

“We’re not following what the Scriptures say about welcoming the stranger among us,” Father Flannery told The Messenger, Belleville’s diocesan newspaper. “Jesus, Mary and Joseph themselves went into Egypt because they were threatened. It’s part of our faith tradition to love one another and to reach out to help.”

Father Flannery and Father Uriel Salamanca, pastor of St. Joseph Parish in Cobden, were among 16 priests from across the country who traveled to the border near El Paso, Texas, and Juarez, Mexico, to learn how the lives of Mexican and Central American immigrants are being affected by the current escalation or zero-tolerance policy in border enforcement by U.S. Immigration and Customs Enforcement.

The two priests are not new to this issue. They have been involved with a Carbondale group, the Southern Illinois Immigrant Rights Project, and Father Salamanca has visited the detention center in Ullin, Illinois. But this was Father Flannery’s first experience along the border fence.

He and Father Salamanca were invited to participate by a group called Faith in Public Life, a network of clergy and other faith leaders who pursue social justice issues. Father Flannery said money for transportation to the event was provided by a grant.

Father Flannery spent Sept. 4-7 in El Paso and in Juarez, meeting with immigrants, leaders of other faith communities and immigration activists. He traveled to “hospitality centers” on both sides of the border that provide help and services to migrants and refugees.

In one case, he said, a hospitality center helped a man who had been abandoned on his trip north and his shoes stolen. The man walked 40 miles in his bare feet before reaching help and medical care.

Father Flannery said his eyes were opened to the real fear many immigrants face in leaving their home countries.

“Most people are leaving because of life-threatening conditions — because of cartels and other violence,” Father Flannery said. “Some are fleeing domestic violence. Before this, I think I thought most people were just looking for a better life. But they’re seeking asylum because they fear for the lives of their families.”

In May, U.S. border officials began separating children and adults who were entering the United States together, sending them to different detention centers. The policy, part of a new immigration strategy by the Trump administration, was rolled back in June in the face of widespread protests, and a large number of the families have been reunited.

However, in recent weeks, the Trump administration has announced its intention of indefinitely detaining migrant children with their families, overturning a 20-year-old agreement that would limit child detentions to no more than 20 days.

Father Flannery said the disruption in the lives of the separated families has far-reaching consequences. “It’s causing psychological damage in these families.” He shared the account he heard of a man reunited with his son after they spent 41 days apart. “He thought his son would be so happy, but all his son could say was, ‘Dad, why did you leave me?'”

Father Flannery said that as our country tackles immigration reform, leaders must seek solutions that are humane and compassionate. He compares the treatment of refugees and asylum seekers at the border to past injustices against American Indians and to the internment of Japanese-Americans during World War II.

On the final day of his trip to the border, Father Flannery participated in a prayer vigil at the border fence, led by El Paso Bishop Mark J. Seitz. Father Flannery was among those who offered petitions during the vigil.

He returned from the trip reinvigorated to keep working to aid Mexican immigrants in southern Illinois. Part of the training participants received during their time in Texas included how to get their message out through media and other means.

On his first Sunday back, Father Flannery said he tied what he’d learned to that day’s Gospel, in which Jesus calls out “Ephphatha!” or “Be opened!” to restore a deaf man’s hearing and speech.

“I said that that healing is addressed to us,” he said. “Jesus wants to open our ears and our hearts as disciples.”

Koziatek is a staff writer at The Messenger, newspaper of the Diocese of Belleville.

NEXT: Catholics join other Christians in calling for admitting more refugees