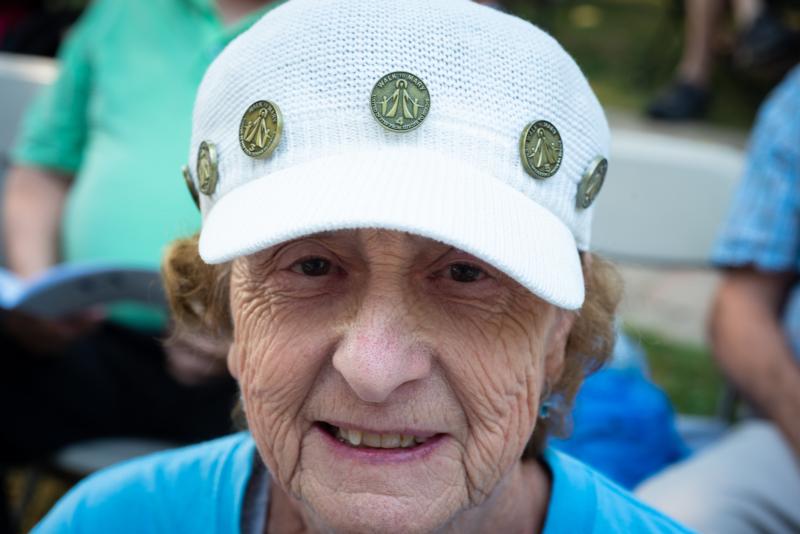 Pat Boerschinger attended the outdoor Mass on the feast of the Assumption on Aug. 15 at the National Shrine of Our Lady of Good Help in Champion, Wis.. Boerschinger, who is legally blind, participates in a 21-mile walking pilgrimage to the shrine, called Walk to Mary, every May. Her hat is decorated with pins received from each walk. (CNS photo/Sam Lucero, The Compass)

GREEN BAY, Wis. (CNS) — For the past 40 years, Pat Boerschinger has been legally blind. And while she cannot see, her faith in God and devotion to Mary guide her every step.

Boerschinger was diagnosed with retinitis pigmentosa, a rare, inherited degenerative eye disease, in 1978. “It was devastating,” she said. “When I first lost my eyesight, the doctor told me, ‘You’re going blind. There’s nothing I can do for you. There’s nothing you can do. You might as well just go home and not cry about it.’

“I cried all the way home,” she recalled. “Then I got home and I thought, ‘Who is he to tell me I can’t do anything about it?'”

What she did was turn to God and to “Mama Mary.”

“I always grew up thinking that our Blessed Mother was my favorite,” she said. “From the time I reached the age of reason, I always thought that if I had her on my side, I could not go wrong.”

So Boerschinger, now 72, turned to Mary for strength. The devotion likely stems from her upbringing and proximity to what was called “The Chapel,” now the National Shrine of Our Lady of Good Help in Champion, Wisconsin, where Mary appeared to Adele Brise in 1859.

Boerschinger’s great-grandfather, when he was about 7 years old, escaped the devastating 1871 Peshtigo fire in the forests near Green Bay by retreating with his family to the shrine.

Born in Green Bay, Boerschinger grew up in Tonet, about two miles from the shrine. She remembered visiting the shrine as a child for prayer, May crowning and feast days. She continues to go to the shrine on the feast of the Assumption and attended Mass there with her husband Jack Aug. 15.

One of the earliest times Boerschinger recalls asking the Blessed Mother to intercede in her life was when her father struggled with alcohol.

“I was always afraid to see my dad come home from work, so I talked to the Blessed Mother a lot when I was growing up. It worked because my dad was just a wonderful person after he straightened out,” she said.

Boerschinger met her husband in 1968 and they were married Dec. 29 that year. The couple operated Jack’s Landscape Nursery in Bellevue for 31 years before selling the business in 1999. They continue to run a smaller nursery business with the same name, and Pat assists by answering phone calls.

Despite the loss of her eyesight, Boerschinger has continued to stay active and practice her faith. She volunteered at Relevant Radio for nearly 11 years, taking telephone pledges during the Catholic radio station’s pledge drives. About twice a year on Fridays, she joins Drew Mariani on the air to recite the Divine Mercy Chaplet.

She prays the rosary four times a day, dedicating her prayers to the needs of others. “You know what, there’s always something to pray for. … My prayer list looks like a scroll. I’m sure by now the good Lord and Mama Mary are very sick of listening to me. That’s why I ‘walk to Mary’ every year.”

Since the annual walking pilgrimage from St. Norbert College in De Pere to the shrine in Champion began in 2013, Boerschinger has walked the entire 21-mile distance. Last May, she was honored to help carry the Marian statue across the Claude Allouez Bridge in De Pere.

“I am planning on doing it next year, too,” she said. “I get a little sore, but who doesn’t?” At the end of the walk, she sits down and drinks a bottle of water. “By the time Mass is over, I feel fine again. I’m used to walking because I run,” she said.

With the assistance of her personal trainer at the YMCA in Bellevue, Craig Congdon, Boerschinger runs about three miles each Tuesday and Thursday. The walking and running keep her active, said Boerschinger, which helps her prayer life.

“If Mary could have walked, about 70 miles when she went to visit her cousin Elizabeth, I should be able to walk 21 miles — although she was a lot younger than me,” she said with a smile.

Staying active and staying positive are results of her love for Mary and her son, Boerschinger said.

“I figure that if the good Lord put me down here, and the reason was that it had something to do with being blind, then I’m going to work with it and figure it out.”