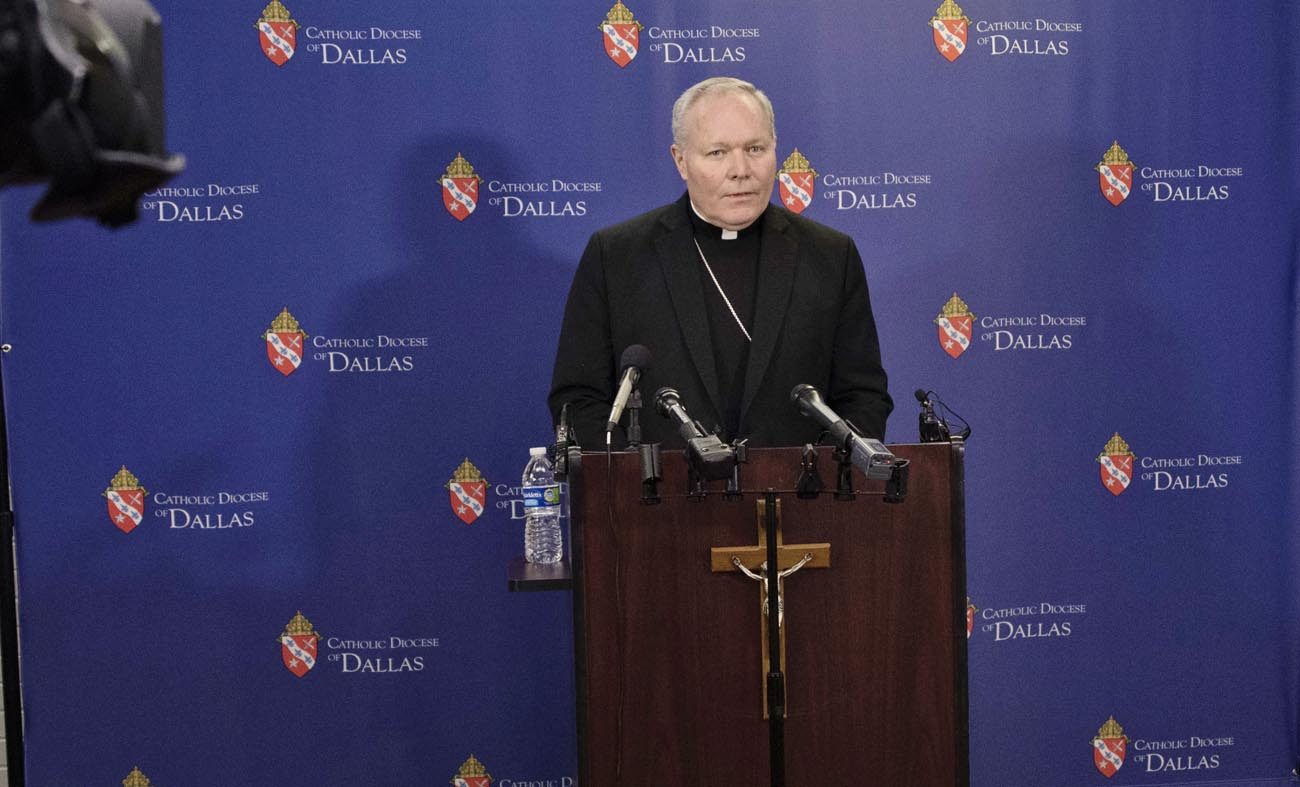 Bishop Edward J. Burns of Dallas answers questions from the media Aug. 30 about why he wrote a letter to Pope Francis asking him to convene a synod about the scandals that have rocked the Catholic Church in recent weeks during a news conference at the Diocese of Dallas. (CNS photo/Jenna Teter, The Texas Catholic)

DALLAS (CNS) — Dallas Bishop Edward J. Burns has asked Pope Francis for an extraordinary synod to address issues in the latest Catholic clergy sex abuse crisis, including “abuse of power, clericalism, accountability and the understanding of transparency in the church.”

The letter, posted to the Diocese of Dallas’ website Aug. 30, was signed by the bishop and priests who serve in leadership roles in various consultative bodies in the diocese. It had been sent earlier in the day to Archbishop Christophe Pierre, the U.S. papal nuncio, so that it could be forwarded to the pope as soon as possible.

“The current crisis of sexual abuse by clergy, the cover-up by leaders in the church and the lack of fidelity of some have caused great harm,” the letter said. It suggests that this synod should include topics such as “the care and the safeguard of children and the vulnerable, outreach to victims, the identity and lifestyle of the clergy, the importance of healthy human formation within the presbyterate/religious community, etc.”

“We are working diligently at the local level to deal with these issues but increasing accountability at all levels of the church is of utmost importance,” Bishop Burns said in a statement. He also noted that the priests who signed the letter “believe a real solution must be found to the heinous issue of clergy abuse of minors.”

One of the signers was Father Rudy Garcia, pastor of St. Francis of Assisi Catholic Church in Frisco, who serves on the diocesan presbyteral council.

“It’s important to come together at this time of crisis in community of faith and respond to it through the lens of faith and with a firm resolve to create a safe environment for our young and vulnerable adults,” he said, adding that priests must go through the same Safe Environment training that lay individuals who work or volunteer in parishes and schools are required to do annually.

“I think the bishop does an excellent job in drawing the community together and addressing this difficult issue at this difficult time and marshalling us around a solid plan of spirituality and of guaranteeing the safety of our environment now and in the future,” he said.

In a news conference Aug. 30, Bishop Burns told reporters that he did not know whether the letter would move the pope to call a synod, but he said that numerous priests encouraged him to send it anyway.

The bishop’s call for the special synod follows a similar one from the bishop of Portsmouth, England, on Aug. 22 and comes after weeks of news of clergy abuse, not only across the United States and abroad, but also within the Diocese of Dallas.

On Aug. 19, Bishop Burns told parishioners at St. Cecilia Catholic Church that their former pastor, Father Edmundo Paredes, had not only stolen church funds, but had also been accused of sexual misconduct by three individuals, later revealed to be three now-adult males, who said the abuse happened more than a decade ago. The bishop said that those allegations were found to be credible.

“If we are ever going to restore trust or credibility in the church, it’s only going to come after we consistently do what is right,” Bishop Burns said Aug. 26 at St. Mark the Evangelist Catholic Church in Plano.

“My friends, let me say to you that if this church of ours has to go through a purification, so be it,” he said to applause. “And let us pray for the fire of the Holy Spirit, so as to purify us, in what we need to do, in being the church that we say we are. I’m not going to cover my ears or cover my eyes or cover my mouth and we are going to look at this head-on.”

In the case of Father Paredes, Dallas diocesan officials have said that the former pastor is accused of theft of approximately $80,000 and that a settlement had been reached with the victims, who wished to remain anonymous.

Bishop Burns has said that in the future the diocese would:

— Hold a Ceremony of Sorrow at St. Cecilia Catholic Church.

— Schedule four town hall meetings, beginning with a liturgy, across the diocese to allow Catholics to ask questions.

— Survey parents, grandparents and parishioners as to the effectiveness of the Safe Environment Program within their parishes.

— Contract a researcher to look at Pennsylvania grand jury report about the inefficiencies of safeguards in the six dioceses there and to compare those inefficiencies to the Diocese of Dallas.

— Ask priests across the diocese to pray the rosary prior to each Mass in October, whenever possible.

Diocesan officials have not said when the ceremony at St. Cecilia would occur or when or where the town hall meetings would be scheduled.

Sedeno is executive editor of The Texas Catholic and Revista Catolica, the English- and Spanish-language newspapers of the Dallas Diocese.

NEXT: Despite blindness, woman loves life, walks with Mary