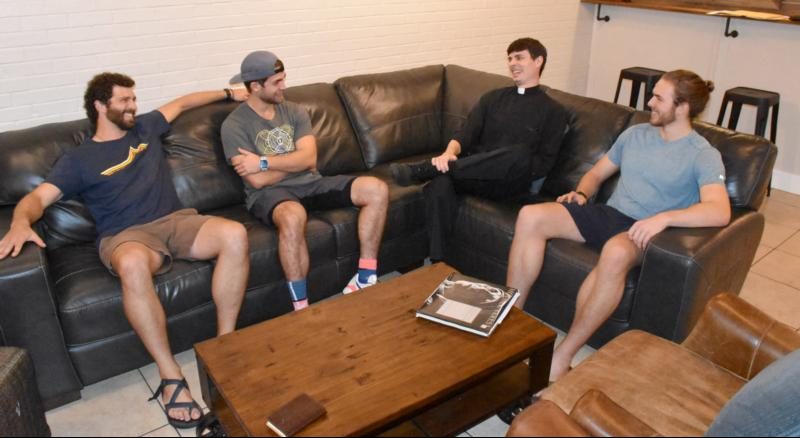 Father Andrew Merrick, pastor of Christ the King Church on the Louisiana State University campus in Baton Rouge, visits with students in a newly dedicated residential home near the church. The house was once a fraternity house but is now being subleased by Christ the King Church to help young men live in a community of faith and formation while attending school. (CNS photo/Richard Meek, The Catholic Commentator) (Web-quality-only photo)

BATON ROUGE, La. (CNS) — Out of the darkness of unspeakable tragedy, a light is rising, spreading a pharos of resurgence and, perhaps most importantly, one of faith.

Christ the King Church in Baton Rouge, through the efforts of pastor Father Andrew Merrick, has transformed a former fraternity house where a college freshman died a year ago in a hazing incident into a community of nine Catholic male students living together, sharing their faith while also developing and deepening their own prayer lives.

A year ago, Max Gruber, a student at Louisiana State University, died when he was allegedly forced to drink what amounted to a lethal amount of alcohol at what was then Phi Beta Theta fraternity house. During his 29 days at the university, he attended Mass at Christ the King.

“I thank God for the opportunity for all of the things he has done in our lives and to be able to take what was a terrible tragedy and bring about a sort of victory to that, said LSU senior Michael Vu, adding that one of the “one of the biggest rules of the house is to continue a dedicated prayer life.”

Establishing a house for young Catholic students to live in community and to be place of growth in the discipleship of Christ has been Father Merrick’s vision since he came to Christ the King two years ago.

He said he wanted to develop a community to be more configured to the mind and heart of Christ as disciples growing together, and to assist students to be formed in the four pillars of formation: spiritual, human, intellectual, pastoral and apostolic.

He originally believed a house for men, and hopefully another for women, would take about five years to develop.

But that changed a year ago. After Gruber died, the fraternity was expelled from the campus. Several weeks later Father Merrick contacted the fraternity about subleasing the vacant house, which is owned by LSU, but was told by fraternity officials expressed no interest at the time.

“So I told the Lord if you want us to have this house, you have to give it to us,” the priest told The Catholic Commentator, newspaper of the Diocese of Baton Rouge. “I don’t think it’s prudent for us to go chasing it down.”

Some weeks later fraternity officials contacted Father Merrick to gauge his interest, because a decision had been made to sublease the property.

Father Merrick looked at the house and said there “were a lot of good things” there, but he was uncertain if financial, human and other resources were in place to make it viable.

However, through a series of circumstances, including a chance meeting with some supporters after daily Mass, a plan was set in motion during Holy Week and an 18-month sublease was finalized. What Father Merrick termed “minor renovations” began in earnest and Aug. 12 the students moved in.

The priest emphasized that establishing the house for this small faith community is not in response to the Gruber tragedy.

“It just lined up the way,” he said. “We are grateful for the fact there is an opportunity for a right to come into a difficult situation. Certainly, the Lord’s providential hand is in all of this.”

Once the house was secured, Father Merrick and house director Adam Trufant began to pray about who would be the initial nine residents. They spread the word, and both agreed they were seeking guys who already had a relationship with Christ the King.

“We approached a lot of different students during that time (and) a handful accepted, some wanted to but for other reasons were not able,” Trufant said. “Some refused for varying reasons, but everybody across the board was enthusiastic about the idea.”

For Vu, a graduate of Catholic High School in Baton Rouge, the decision was easy, saying he “had a desire to live in brotherhood with guys who were pursuing the same thing I am.”

The students are governed by a set of rules that include maintaining cleanliness in the house, cooking and meeting with Trufant every few weeks. Also required is attendance at a weekly dinner that includes Scripture study, as well as prayer.

“We have seen growth and a steady enthusiasm from all of the guys,” Trufant said. “One of the guys said he felt had had taken concrete steps forward with some of the things he has struggled with.”

“There is an emphasis of commitment and reliance on each other in order to grow in healthy ways,” he added. “I see growth in prayer life, joy in community and consideration of others. Everybody has said it’s been really, really fun to live in this house.”

Vu said the weekly gatherings have opened him to a different perspective that he would not have otherwise been exposed to, “so it’s been really, really good.”

“Having a brotherhood of men supporting me in the things I am struggling with; little things like waking up on time or big things like relationship issues; that’s been really, really awesome,” he said.

Father Merrick said the purpose is of the house is not necessarily for the young men to discern a priestly vocation, but said any Catholic man pursuing growth in his faith will eventually discern whether the Lord is calling him to the vocational life.

“Witnessing my brothers go through (the discernment process), I’ve been made keenly aware of the fact that if Christ calls there is saying no to that, added Vu. “I’ve always had to keep my door open to that.”

And perhaps that would be a blessed light to come from an unspeakable darkness.