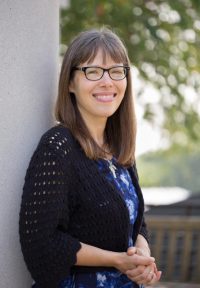 Panelists and audience members alike shared their pain, shock and complete frustration with recent allegations of abuse and cover-up by church leaders and they also showed a strong desire to somehow forge a path out of this.

This wasn’t a talk where audience members were scrolling through their phones to pass time or looking at their watches to see when it would be over. During the hour and a half, there were moments in the churchlike campus hall when you could hear a pin drop, particularly when panelists shared about their own experiences of being abused.

The audience also audibly gasped over references to church leaders’ seemingly callous responses to the abuse crisis over the years and they also broke into applause at several points, particularly over calls for laypeople, especially women, to have more say in the church.

When it came time for question and answer session, a line formed immediately and snaked to the back of the hall. Many of the questions, from college students, recent graduates and many long since out of college, echoed frustrations and a desire to make things right but no idea how to begin.

One questioner, who said he was a seminarian, asked in almost a hushed tone: “What can we do? How can we be a solution?”

The panelists were unable to answer every question so in a sense the evening raised more questions than it answered, but as many people pointed out during the evening, this crisis has impacted the church on many levels so there are no quick fixes.

In other words, there was no handout of next steps for the 500 people who attended. The main ideas that came across were: the urgency of listening to victims, the need to speak up not only for justice for victims but for transparency in church leadership, and the importance of staying in the church and continuing its good work at a time when its moral leadership is in question.

The listening and speaking up aspects were both in full form during the discussion titled: “Confronting a Moral Catastrophe: Lay Leadership, Catholic Social Teaching and the Sexual Abuse Crisis” which was co-sponsored by Georgetown University’s: Initiative on Catholic Social Thought and Public Life, the Office of Mission and Ministry, and the Berkley Center for Religion, Peace and World Affairs

Two panelists spoke directly about their experience as childhood sexual abuse victims. Kevin Byrnes, an attorney, talked about his lifelong scars from being abused by a priest. Dawn Eden Goldstein, a theologian and author of “My Peace I Give You: Healing Sexual Wounds With the Help of the Saints,” who had been abused in a synagogue, said her faith helped her find healing. Goldstein, who goes by the pen name Dawn Eden, is an assistant professor of dogmatic theology at Holy Apostles College and Seminary in Cromwell, Connecticut.

Even John Carr, director of Georgetown’s Initiative on Catholic Social Thought and Public Life, stepped out of his usual moderator role to share his own experience. He said when he was a seminarian he suffered bullying and sexual abuse.

“I did not endure the worst of what was revealed in the Pennsylvania grand jury report, but this evil was a part of my life,” he said, adding that he had never spoken of this to anyone until recently. And in written remarks, he noted that he recently reported this to the provincial of his abusers’ community and learned that the abusers had died and that “other allegations against them supposedly came forward only after their death.”

“I have to wonder whether my silence contributed to the abuse of others,” he said, urging the audience to speak up. “Silence is not an option for any of us,” he said.

Like other speakers in the panel, he said he felt betrayed by church leaders, especially Archbishop Theodore E. McCarrick, whom he described as a friend and supporter of his work. He said years ago when he heard rumors about the archbishop’s abuse of power with seminarians he said he asked him directly if that could be true.

He said the archbishop told him: “If any of that were true, I would not be here,” which Carr said he believed.

Robert Bennett, a Washington attorney and member of the original National Review Board for the Protection of Children and Young People, said he felt similarly betrayed by the actions of Archbishop McCarrick, who was his good friend, and also by the church hierarchy, because as he put it: “How can someone get so high up in the church when it was well known what he was doing?”

Karen Tumulty, a Washington Post columnist and member of Blessed Sacrament Parish in Washington, said the reports of clergy abuse and cover-up revealed in the Pennsylvania grand jury report this summer is “just the beginning,” noting that 12 to 15 states are looking at launching similar investigations.

She recently attended a parish town hall meeting on the abuse crisis and said the “amount of anger there was extraordinary” primarily because many people feel there has been a lot of “lip service” to the laity but that church leadership does not seem likely “to share its power with them.”

But as several people said in the evening’s discussion, that’s where this work needs to happen. Or as Tumulty put it: “Fixing this will have to come from the pews.”

And the challenge is also there for women religious, priests and seminarians.

Goldstein’s response to the seminarian’s questions about what they can do brought the frustration and anger so many had spoken of back to God.

“Take the pain of the victims and the pain and suffering of the church and use that to root you more deeply in your calling,” she said, urging him and others to pray and meditate on that.

NEXT: Frat house where tragedy struck reborn as faith community for students