Joy, hope contagious for Encuentro participants as they discern priorities 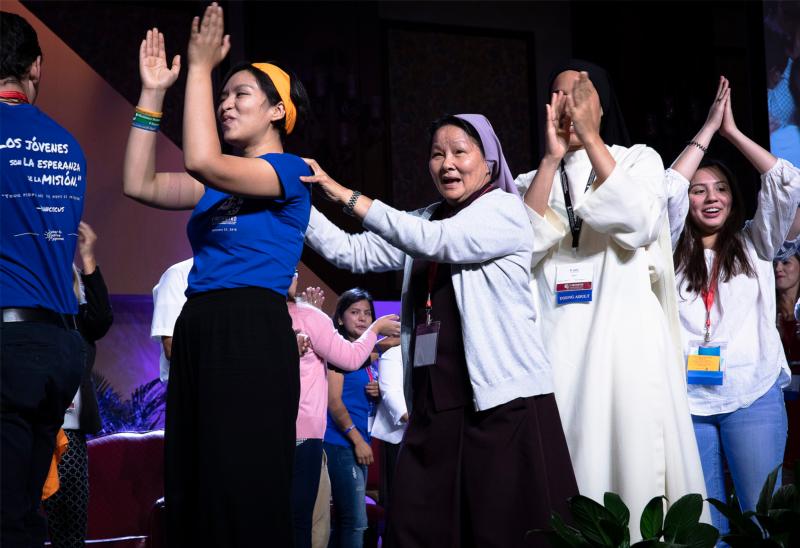 Delegates celebrate the Sept. 23 closing session of the Fifth National Encuentro, or V Encuentro, in Grapevine, Texas. The Sept. 20-23 gathering brought together more than 3,200 Hispanic Catholic leaders and about 125 bishops from across the country. (CNS photo/Tyler Orsburn)

GRAPEVINE, Texas (CNS) — Joy, hope, energy and a spirit of continued collaboration are contagious among the participants of the Fifth National Encuentro in Grapevine.

One of the attendees, a 22-year-old Mexican-American seminarian, said he feels enriched by the exchange of ideas on pastoral needs in areas such as vocations and young adults. He also feels his contributions will be of value to strengthen Catholic Hispanic ministry in the United States.

“In school we do a lot of theorizing and then you come here, and you come back to the reality to see what the needs of the church are,” the seminarian, who asked that his name not be used, told Catholic News Service.

“One thing that surprised me is the amount of youth, young leaders, young people working for different dioceses, it’s something that I didn’t expect to be a reality,” he added.

The Encuentro participants, who totaled about 3,200 Hispanic ministry leaders, bishops and members of organizations and ecclesial movements, continued a full day of consultation and discernment Sept. 22 on 28 ministerial areas and 10 priorities which include evangelization and catechesis, family, immigration, justice and peace, and Hispanic youth and young adults.

During an afternoon plenary session, regional representatives highlighted the contributions of “Dreamers,” or Deferred Action for Childhood Arrivals recipients. They were part of the Encuentro process but were unable to be present at this gathering in Texas for fear of being detained and deported due to the state’s harsh immigration laws. It was a moving moment in which the audience cheered in solidarity with them.

“I’m very hopeful with the results of this Encuentro that we’re going to go back home and really bring consciousness to the whole world, that we’re going to make a difference in the lives of those who need us,” Sister Norma Pimentel, an Encuentro delegate, told CNS. A member of the Missionaries of Jesus, Sister Pimentel is executive director of Catholic Charities of the Rio Grande Valley in Texas.

Other recurring issues include supporting Hispanic women in leadership roles; the need to continue the role of a missionary church that reaches out to others; more access to leadership positions at all levels; and to reach out to, mentor and guide young adults as ministry leaders.

Unlike previous Encuentros where a national pastoral plan was developed following the national gathering, the results of the Fifth Encuentro, or V Encuentro, will be compiled into a final document that will be shared with all dioceses, so parishes and dioceses can utilize it to reinforce and strengthen their Hispanic ministry groups.

The reason is that the Hispanic Catholic community in the church has grown to be large and diverse in its needs and realities, and what makes sense for San Antonio would not make sense in other dioceses like Green Bay, Wisconsin, or Tulsa, Oklahoma, explained Archbishop Gustavo Garcia-Siller of San Antonio in an interview with CNS. He chairs the Committee on Cultural Diversity in the Church of the U.S. Conference of Catholic Bishops.

“Each diocese has been in a different process even in the V Encuentro,” Archbishop Garcia-Siller said.

He also pointed out that the involvement of bishops from most dioceses and archdioceses shows their support for the Hispanic community and commitment to move forward.

“The main thing is that the bishops — and you see it with the presence of bishops (at this gathering) — we are assuming this walking together with the people of God in the Catholic Church in which many, many, many are Catholic for the sake of the whole church,” Archbishop Garcia-Siller said.

NEXT: Today is ‘hour of the laity,’ Archbishop Gomez tells Encuentro delegates