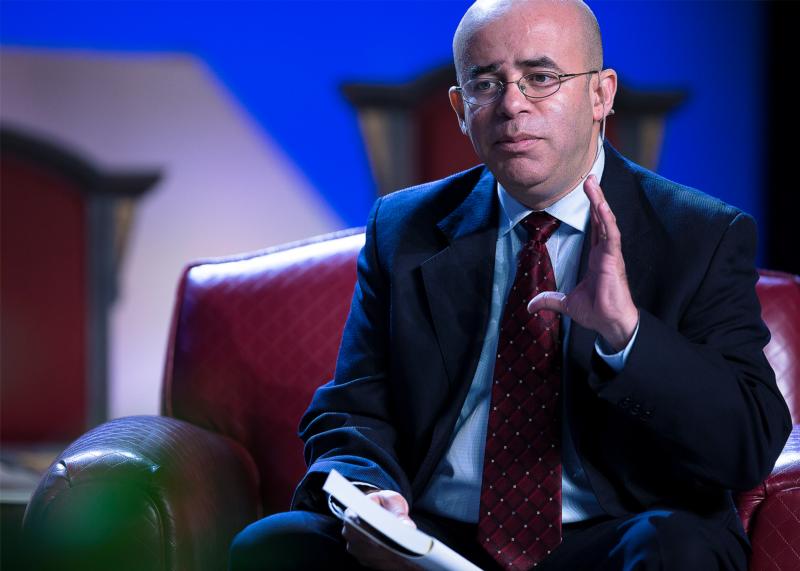 Hosffman Ospino, associate professor of theology and religious education at Boston College, speaks to delegates Sept. 21 during the “Getting Involved” panel presentation at the Fifth National Encuentro, or V Encuentro, in Grapevine, Texas, Sept. 21. The Sept. 20-23 event is a gathering of more than 3,200 Hispanic Catholic leaders and about 125 bishops from across the country. (CNS photo/Tyler Orsburn)

GRAPEVINE, Texas (CNS) — The thousands of Hispanic Catholic ministry leaders gathered in Texas for the Fifth National Encuentro shared views on the maturity and presence of their diverse community and held dialogues on the dreams and challenges that they face.

The contributions of Hispanic Catholics to the church and society show the beauty and excitement of their people and culture, but it can be messy and complicated at times, expressed in a panel dialogue a group of Catholic leaders during the second day of sessions at the Sept. 20-23 gathering.

The coming together of Hispanic Catholic leaders from around the country reflects a mature church, said Hosffman Ospino, a theologian at Boston College and a member of the Fifth Encuentro’s organizing committee. But he also sees that as the community is becoming bolder there is also a sense of excitement and “messiness.”

“All these processes of the encuentros since 1972 reflect the energy and a maturity of a church that is here and is here to stay,” Ospino said. However, the “messiness” is the challenges that must be overcome, such as a fragmented church, a church that struggles to embrace the Hispanic community, the young leaders who are transforming the church.”

While talking about the ways to move forward and continuing the collaborations and outreach that they have gained within their parish and diocesan communities, Cardinal Joseph W. Tobin of Newark, New Jersey, stressed the importance of a pastoral conversion.

“We have to not only allow the spirit to convert our hearts, but also our strategies, our methods and our structures, whether it’s at the parish level, diocesan or national,” Cardinal Tobin said during the plenary session.

Ospino also highlighted the leadership of Hispanic women, which was evident during the Encuentro process, where they played a leading role in organizing and pulling through the Encuentro at all levels of the process.

“It is women who are leading the way, but at the same time, the downside of this is that we still fail to recognize and affirm that leadership role of Latino women in our church,” Ospino said.

The Fifth National Encuentro, also called V Encuentro, is a process of missionary work, consultation, leadership development and community building that seeks to develop better ways in which the Catholic Church in the United States can respond to Hispanic Catholics. Over 3,000 Hispanic ministry leaders were participating in the Sept. 20-23 event, representing their parishes and 159 dioceses and other national Catholic organizations and groups.

Hispanics represent about 40 percent of U.S. Catholics and nearly 60 percent of millennial Catholics, according to research from the Center for Applied Research in the Apostolate.

During the afternoon sessions, representatives for each of the 14 episcopal regions — in which the dioceses of the United States are geographically divided — reported the results of the small group consultations they held throughout the day.

The task at hand was to highlight the areas that need accompaniment the most, and obstacles for Hispanic Catholics in 28 ministerial areas such as vocations, evangelization, Catholic education, family life, immigration and care for immigrants, among others.

Among the most pressing issues mentioned by participants is outreach to youth and young adults and creating spaces within their communities where they can feel heard, engaged, and supported in taking leadership roles.

Young Latinos face challenges such as feeling abandoned and lonely, said a priest-participant. Those struggles others such as family separations and social media often play detrimental roles in leading them down a path of alcoholism or drug abuse. “Families in crisis lead to youth in crisis,” declared the priest.

Pastoral accompaniment during this somber time for the church in the U.S. amid the clerical sex abuse crisis was also addressed. Sister Ruth Bolarte of the Diocese of Metuchen, New Jersey, voiced the concerns and the response of Hispanic Catholics in episcopal region 3 that encompasses Pennsylvania and New Jersey.

The crisis has brought up a lot of pain, confusion and questions, and at the same time it is an opportunity for the community to support their bishops and priests through listening, sharing accompaniment and communication, explained Sister Bolarte, a member of the Sisters Servants of the Immaculate Heart of Mary, who is director of the diocese’s Office for Cultural Diversity Ministries.

“Through liturgy and prayer, we respond with a spirit of forgiveness and penitence so we can open those windows of hope, recognizing the pain but at the same time recognizing the opportunity, and what can be done. We want to defend our faith and we want to move forward,” Sister Bolarte said.

PREVIOUS: Work to purify church begins with ‘you and me,’ Archbishop Gomez says

NEXT: Joy, hope contagious for Encuentro participants as they discern priorities