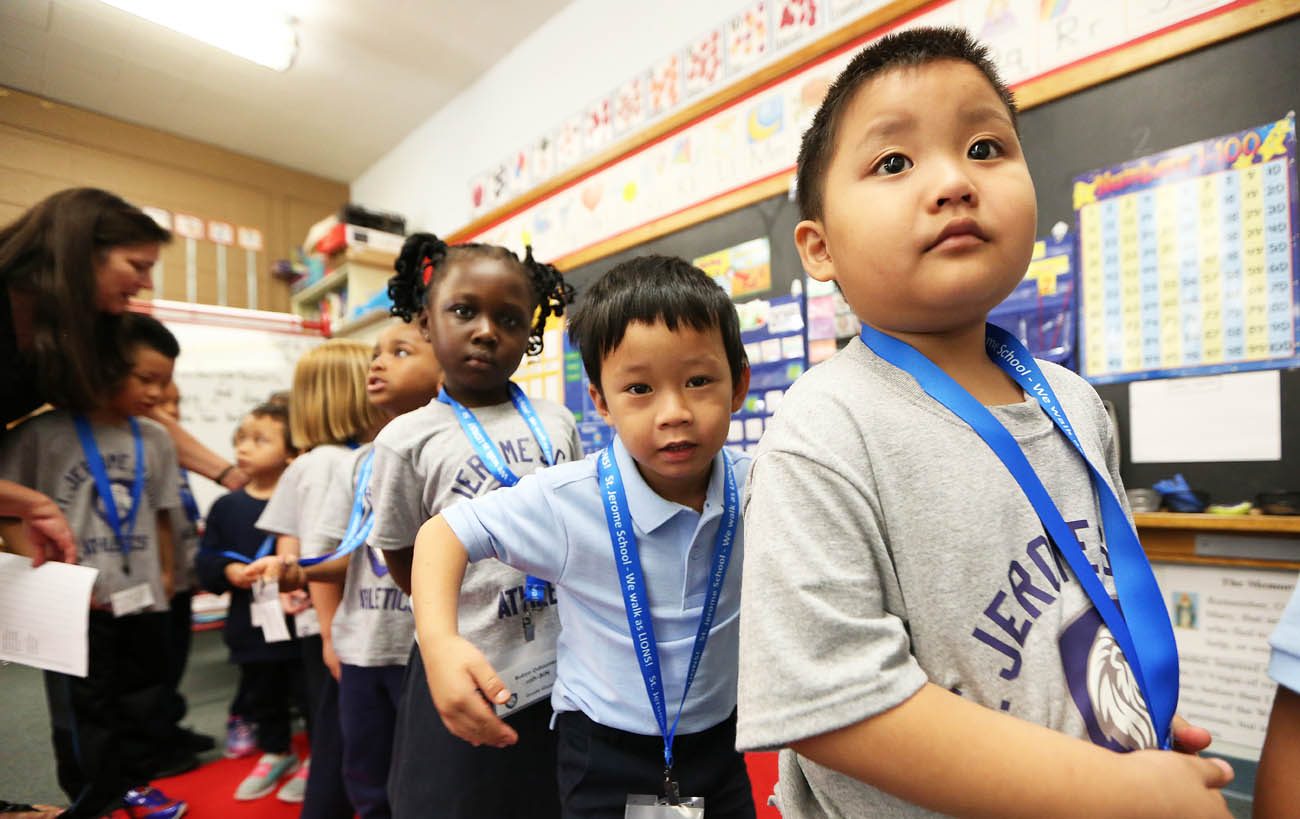 Kindergartners December Hai, right, and Johnson Htoo, second from right, stand in line Sept. 6 as they wait to go to the computer lab at St. Jerome School in Maplewood, Minn. The two students are members of the Karen ethnic community from Myanmar in southeast Asia. (CNS photo/Dave Hrbacek, The Catholic Spirit)

MAPLEWOOD, Minn. (CNS) — It seems like a typical morning school scene: dozens of students pouring out of a bus, backpacks over shoulders, chatting with friends before the 9:30 a.m. bell.

But at St. Jerome School in Maplewood, outside of St. Paul, the sight is nothing short of a miracle, Principal Anne Gattman told The Catholic Spirit, newspaper of the Archdiocese of St. Paul and Minneapolis.

It also is the answer to the fervent prayers of the students’ parents.

Most of the students are Karen, members of an ethnic community in Myanmar in southeast Asia. The families were displaced by civil unrest and lived in refugee camps in neighboring Thailand. Forty-six Karen children in kindergarten through eighth grade are enrolled at St. Jerome this year.

In the last decade, Karen families — some of them Catholic — have immigrated to the United States. In 2011, Karen Catholics began arriving in St. Paul, where they started looking for a Catholic parish and school for their children.

Enter Deacon Seraphim Wirth, then a brother with the Franciscan Brothers of Peace.

His involvement began with a phone call in 2011 at the community’s St. Paul friary. He answered the phone one late afternoon and tried to understand the caller’s words. All he could decipher was “want to go to Catholic.” He suggested that the caller come to the friary the next day.

After hanging up the phone, Deacon Seraphim started thinking that “there was something” to the encounter. “I thought, if they come in tomorrow, well then, maybe it’s something I’m supposed to do,” he said.

The man, with his wife and daughter, did visit the friary. Deacon Seraphim learned that the man, Pah Chi, had received a rosary that originally came from the brothers, which is why he called the friary.

So began an apostolate for the brothers. As the brothers started working with the Karen (pronounced kah-REN), parents started asking how their children to go to Catholic schools. A few families were able to afford it, but most earned too little money to pay tuition.

Deacon Seraphim tried for several years to find affordable Catholic education, but financial obstacles existed. First, the former refugees needed tuition assistance beyond what a school could provide. Second, busing was needed because the families live on St. Paul’s east side and attend St. Casimir Parish, which is two miles from the nearest Catholic school. The cost to charter a bus: $30,000 for the entire school year.

By summer 2017, Deacon Seraphim was running out of ideas — and hope.

A chance visit to St. Jerome while running a vacation Bible camp with the Missionary Sisters of Charity eventually led to an answer. In August 2017 he arranged a field trip to St. Jerome’s athletic field so the children could play soccer.

Gattman, just weeks into her job as principal, saw the students and wondered what school they were attending. After learning that the brothers were involved in the camp, she called the friary and left a message for Deacon Seraphim.

“I ignored it for a month and a half,” he said, thinking it was yet another school that would turn down the Karen children for financial reasons.

Finally, after leaving in September for studies at St. Pope John XXIII National Seminary in Weston, Massachusetts, he called Gattman. They talked several times. Her excitement grew over the prospect of 46 new students, nearly half the school’s total K-8 enrollment last year.

“The more that I visited with Brother Seraphim and got to know some of the people in the community, the more I felt that it was really a beautiful situation for St. Jerome to grow enrollment and to provide Catholic education to parents that were desperately wanting their children to be in Catholic schools,” Gattman said. “It just seemed like a partnership that was logical at the moment. As we continued to work together, it’s become a project that is more than just logical, but it just feels very God driven.”

Divine intervention may have come in the form of a $90,000 grant from an anonymous donor to cover busing for the year and tuition assistance. Family contributions are determined on a sliding scale, based on what they can afford. Gattman said no family was turned down for financial reasons.

A year ago, five children from two families attended St. Jerome. This school year, some of the grades will have up to eight Karen students — a significant proportion when the average class size is 16.

An immediate challenge is learning names. In the Karen culture, people do not use first and last names. Instead, names are a series of two to four words, each unique to the individual.

Then there’s the language barrier. Children know English and are mostly caught up with their American-born classmates. But their parents don’t speak English, making communication difficult between school personnel and parents. To address the challenge the school hired a young Karen woman to serve as a liaison with parents.

In addition, the Minneapolis-based GHR Foundation awarded a grant so the school could hire an English language teacher. The school also has paraprofessionals, tutors and two young adults from Teach for Christ, an organization that sends men and women to serve at archdiocesan schools.

Second-grade teacher Shelly Berthiaume, in her 13th year at St. Jerome, has five Karen students in her class of 16. “I’m excited to give them a second home so that they can feel loved,” she said.

She also expects non-Karen students to benefit as well because they’ll learn about another culture. The school plans to weave aspects of Karen culture into the school year.

Hrbacek is a staff writer and photographer for The Catholic Spirit, newspaper of the Archdiocese of St. Paul and Minneapolis.