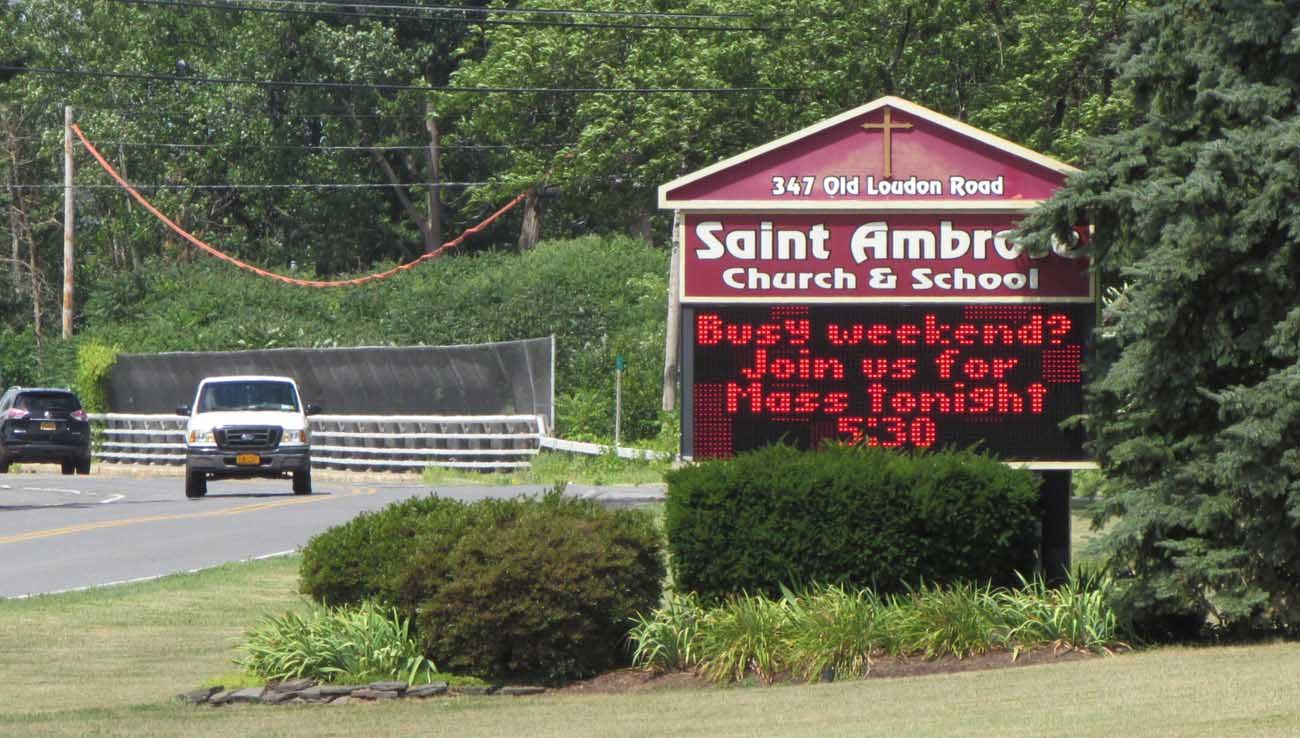 A car passes a sign outside St. Ambrose Church in Latham, N.Y., in late July that is advertising a Sunday evening Mass. It is one of nearly a dozen parishes in the Diocese of Albany that offers a Sunday-night Mass. (CNS photo/Kate Blaine, The Evangelist)

ALBANY, N.Y. (CNS) — Going to church on Sunday morning is a tradition for most Catholics, but a new trend may be emerging: Sunday-evening Masses.

St. Michael the Archangel in South Glens Falls is one of nearly a dozen parishes in the Diocese of Albany that offer a Sunday-night Mass. It’s the only parish in that area with an evening Mass on Sundays.

Five years ago, Father Guy A. Childs, pastor, started offering a 5:30 p.m. Mass on Sundays at St. Michael twice a month. It quickly became popular. In 2015, it became a weekly offering.

“It really does fit a need,” the pastor explained in an interview with The Evangelist, Albany’s diocesan newspaper.

According to a census of Massgoers across the diocese conducted every October, 71 parishioners attended St. Michael’s 5:30 p.m. Mass in 2016 on the weekend surveyed.

When the October Mass count was repeated in 2017, 134 parishioners attended the Mass — around a 30-percent increase from the previous year.

Father Childs said the evening Mass is beneficial for families who want a chance to sleep in on Sunday or have weekend obligations that may keep them from attending morning Mass. The evening Mass gives parishioners a “last chance to get to Mass on Sunday,” he said.

“It definitely provides a service,” agreed Father James Belogi, pastor at St. Madeleine Sophie Parish in Schenectady, which offers a Sunday 7 p.m. Mass. “People have come up and thanked me for the Mass.”

JeanAnn Dennis, a parishioner at St. Michael, attends the evening Mass there because it fits into her schedule. Some weekends, she doesn’t have time to get to the 4 p.m. Saturday vigil Mass, and she watches her grandchildren all day on Sundays.

Having a Sunday-evening Mass makes things easier, she said. “There are people there who solely go to the 5:30 p.m. It’s amazing how popular it is.”

Other parishes, such as St. Vincent de Paul in Albany and St. Madeleine Sophie, also have found that a Sunday-evening Mass fills a niche: Parishioners who struggle to find time in the morning have started coming to the evening Mass regularly instead.

Anna Hartz, a parishioner at St. Madeleine Sophie, believes that evening Masses “have become more convenient” over the years. Hartz attends her parish’s 7 p.m. Mass on Sundays. She started going when her daughter became an altar server for that Mass, but now says she enjoys the night Mass more.

“It’s quieter, more prayerful,” she explained. “There’s more of a peace at the Mass at night, and it lends (itself) to a better worship experience.”

Father Anthony Barratt, director of the diocesan Office of Prayer and Worship and pastor of Holy Trinity Parish in Hudson/Germantown, said it doesn’t matter if parishioners attend Sunday Mass in the morning or evening, “as long as you are there and present.”

Moreover, the popularity of certain Mass times can be tied to specific cultures and areas of the world. A native of England, Father Barratt noted that “many parishes have more Sunday evening Masses” there than in the United States. His home parish in the U.K. offered two Sunday-evening Masses.

In the Albany Diocese, Father Barratt said a parish wishing to add an additional Sunday-evening Mass would have to ensure that it was sustainable. The season, the weather and a variety of other factors can lower the attendance at an evening Mass.

During the winter, for instance, fewer people may attend evening Mass because it gets dark so early. Priests may be less inclined to add an extra evening Mass after working all weekend.

Another issue would be finding priests to celebrate the additional Masses. According to canon law, a priest can only celebrate two Masses on a given day, unless there is a special need for more. Adding a Sunday-evening Mass with an already limited number of priests available to serve parishes in the Diocese could be difficult.

Still, Catholics are welcome to attend a parish other than their own to find the Mass of their choice, which is often the case. At St. Michael, a majority of Massgoers on Sunday evenings are people from surrounding parishes.

Father Belogi said the same: His Sunday-evening Mass “attracts people from a variety of parishes.

“People who attend are fairly consistent, but there are different and new faces from neighboring parishes,” he said. “Regionally, I think it’s good to have evening Mass opportunities.”