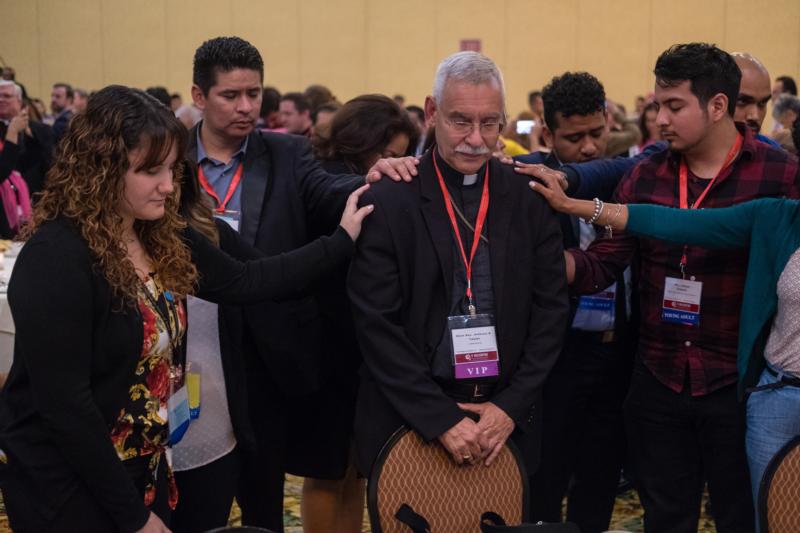 Young Catholic adults pray over Bishop Anthony B. Taylor of Little Rock, Ark., Sept. 21 during an evening encounter between young adults and their bishops at the Fifth National Encuentro in Grapevine, Texas. The dinner brought together more than 700 Catholic young adults and a cross section of the 150 bishops attending the national event. (CNS photo/James Ramos, Texas Catholic Herald)

GRAPEVINE, Texas (CNS) — When Sister Lucero Espitia looked around the ballroom, she saw other people like herself.

While the Disciple of Jesus sister from Aguascalientes, Mexico, didn’t see many other habited consecrated women religious like herself, she did see some 750 other Catholic young adults like herself buzzing with excitement as they sat down for dinner with a cross section of the 150 bishops attending the V Encuentro, or National Fifth Encuentro, in Grapevine.

Sharing her perspective as a religious sister, she said she felt encouraged and happy to see the bishops meeting with the young people.

“It has been enriching to me,” she said, “to see the many realities of the young people living in the each of these (bishops’) diocese. The young people need to be taken into account. They have very important ideas, very bright ideas. Their concerns are good, you have to guide them, but they are good.”

“These bishops have been entrusted a very strong and important mission,” Sister Espitia told the Texas Catholic Herald, newspaper of the Archdiocese of Galveston-Houston. “The bishops need to know their young people because they closely share the needs and thoughts of all those who are in their diocese and are sometimes not as visible as the older people, however, they have strong concerns and important needs to address.”

Bishop Michael G. Duca of Baton Rouge, Louisiana, found the young adults at his table to be “honest, hopeful.”

He acknowledged the slight awkwardness at the beginning of the conversation, even the panel noted that many Catholic young adults only meet bishops at their confirmation. Still, conversation eventually flowed freely at every dinner table, with even at least a dozen tables sharing two bishops in the dialogue.

Various conversations at each table could be heard, with some asking how a bishop was appointed, or how parish pastors were chosen, while others brought up the current sexual abuse crisis and asked how they were handling the issues.

Despite the geographic distances from the young adults’ homes, Bishop Duca found “Surprisingly similar concerns and needs and desires and hopes.”

He said he appreciated the encounter with young adults.

“As a bishop, you’re not able to get in contact with youth very often,” he said. “(The) job moves you in a certain direction. You have to consciously kind of break out sometimes just to get in contact with … many different age groups. So this was a time to really break through some of those constraints and really sit down and have some quality time with young people in the church.”

Gabriela Karaszewski, who was seated next to Cardinal DiNardo, said he was “energized” by the meeting with the young people. At her table, the young people shared their realities with the cardinal, including an young adult in the U.S. without documents, who expressed his gratitude to the cardinal for his efforts to support the “Dreamers,” the recipients of Deferred Action for Childhood Arrivals.

Karaszewski, the director of the Office of Young Adult and Campus Ministry of the Archdiocese of Galveston-Houston, said “this moment, with the bishops and young people, is the most exciting moment of the whole weekend. Young peoples are privileged to sit with bishops and I think bishops value the time that they had listening to them.”

“I was particularly moved this evening when we were asked to pray with the bishops and actually lay our hands on the bishops,” he said. “I think the bishops themselves were probably surprised. When I think of the early church and first Christians, I couldn’t help but think that maybe they asked to be prayed for in that way.

“We really need to be able to put those personal stories and that personal prayer with the realities that our church is facing today,” he added.

Runyan, who works to bring college students on mission trips both local and abroad, sees God’s work moving in the Hispanic and Latino church.

“I think God’s moving through everything, and it’s very encouraging to see and hear the language of the new evangelization, especially being spoken in the Hispanic community. It’s the same language that’s being spoken in every community these days, so that’s very exciting.”

Zulay Carvajal of the Southeast Pastoral Institute in Miami spoke on the panel.

“It was great to have the opportunity to sit down with the bishops and the leaders that have been walking with us all this time and really have this conversation where they’re really listening one by one,” she said. “The fact that they created a space for us was amazing, it felt really good.”

She said she was inspired by the meeting and encouraged that “the bishops are thinking about us and that we’re not alone.”

“There’s a lot of young people working to bring the other young people that are not in the church, so we have hope.”

NEXT: U.S. urged to end funding of research using tissue from aborted babies