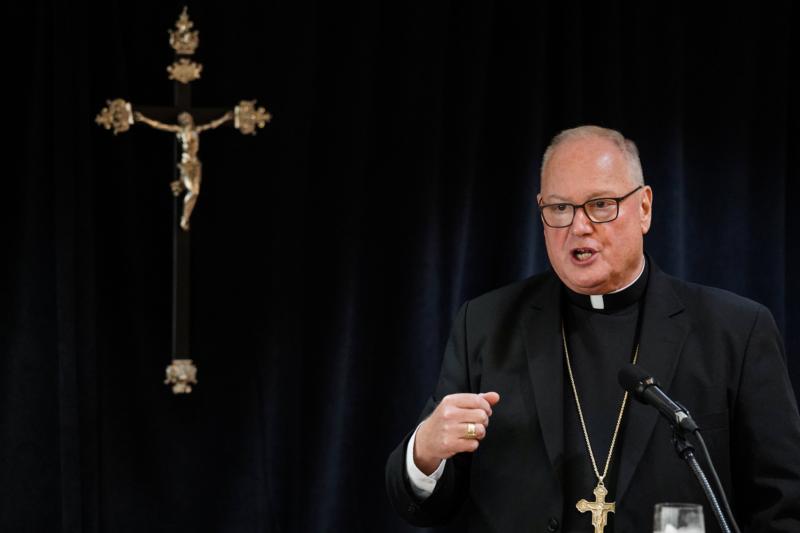 New York Cardinal Timothy M. Dolan, chairman of the U.S. bishops’ Committee on Pro-Life Activities, speaks Sept. 20 in New York City. Cardinal Dolan praised a decision by the U.S. secretary of the Department of Health and Human Services to end a Food and Drug Administration contract with a company “whose business is to procure aborted baby parts for research.” (CNS photo/Jeenah Moon, Reuters)

WASHINGTON (CNS) — The chairman of the U.S. bishops’ Committee on Pro-Life Activities praised a decision by the U.S. secretary of the Department of Health and Human Services to end a Food and Drug Administration contract with a company “whose business is to procure aborted baby parts for research.”

After this important “first step,” it “remains incumbent” on the Trump administration “to act quickly to cease all funding for research involving body parts from aborted babies,” New York Cardinal Timothy M. Dolan said in a Sept. 27 statement.

The cardinal was referring to the Sept. 24 announcement by HHS Secretary Alex Azar that his agency was terminating an FDA contract with Advanced Bioscience Resources in California to provide human fetal tissue to develop testing protocols.

HHS also said it will do an audit of “all acquisitions involving human fetal tissue” and “all research involving fetal tissue” to make sure the statutes and regulations governing such research are being followed. Such oversight, it said, also is necessary “in light of the serious regulatory, moral and ethical considerations involved.”

Cardinal Dolan, in his statement, said that “the question is not exclusively what is permitted by law, but what is right and just.”

“For the federal government to create a demand for abortion and use these children’s body parts for research is wrong,” he said.

He also said the U.S. Conference of Catholic Bishops and other pro-life leaders and organizations also want answers to questions they asked of Azar, he said, in a Sept. 11 letter “regarding the funding and use of fetal tissue from aborted babies.”

The letter to Azar, signed by more than 40 pro-life leaders, followed news reports about the FDA signing the contract “to purchase ‘fresh’ aborted fetal organs from Advanced Bioscience Resources, for the purpose of creating humanized mice with human immune systems.”

The signers said they were “shocked and dismayed” by this news. “We expect far better of our federal agencies — especially under the leadership of a courageous pro-life president — entrusted with the health of American citizens,” they wrote.

They added: “It is completely unacceptable to discover that the FDA is using federal tax dollars and fomenting demand for human body parts taken from babies who are aborted.”

In his Sept. 27 statement, Cardinal Dolan said: “Under a pro-life administration, there is simply no room for callously using aborted children to further a research goal. This must stop immediately. Our government should only use taxpayer dollars for ethical research.”