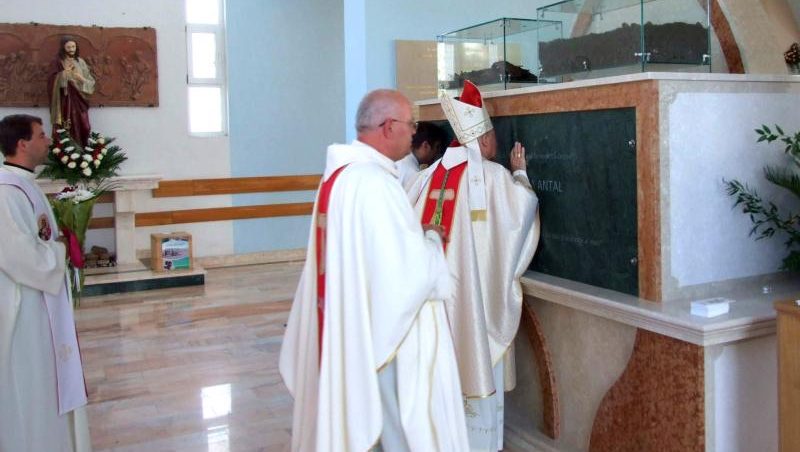 Bishop Petru Gherghel of Iasi, Romania, blesses the tomb of Veronica Antal Sept. 23, the day she was beatified in Nisiporesti, Romania. The 22-year-old was beatified as a "martyr to chastity," six decades after she was murdered while resisting rape. (CNS photo/courtesy Romanian bishops' conference)

Bishop Petru Gherghel of Iasi, Romania, blesses the tomb of Veronica Antal Sept. 23, the day she was beatified in Nisiporesti, Romania. The 22-year-old was beatified as a “martyr to chastity,” six decades after she was murdered while resisting rape. (CNS photo/courtesy Romanian bishops’ conference)

WARSAW, Poland (CNS) — A 22-year-old Romanian peasant has taken a step closer to sainthood as a “martyr to chastity,” six decades after she was murdered while resisting rape during the communist-era repression of the Catholic Church.

Cardinal Angelo Becciu, prefect of the Vatican Congregation for Saints’ Causes, said Veronica Antal’s fate was similar to that of persecuted Christians in ancient Rome, who had asked the same question: “Who will separate us from the love of God?”

Antal, a lay Franciscan who died in 1958, was the first Romanian woman to be beatified and first Romanian layperson formally honored as a martyr from the time of communist rule.

Born Dec. 7, 1935, the oldest of four children in Romania’s Moldavia province, Antal was taught the faith by her grandmother. Each day Antal walked five miles to Mass in the nearest church at Halaucesti. At age 17, she took vows of chastity as a Franciscan tertiary.

Unable to become a nun because all religious orders had been suppressed by the communists, she created a prayer cell near her parents’ house, from where she visited the sick and needy and helped prepare children for confirmation.

On the evening of Aug. 24, 1958, Antal stayed to sweep the church after a Mass. As she was walking home alone, praying the rosary, she was attacked by a neighbor, who stabbed her 42 times when she refused sex and left her to die in a cornfield.

Although her grave at Halaucesti’s cemetery immediately became a place of pilgrimage, a beatification process was launched by the Conventual Franciscans only after the 1989 collapse of communist rule, using material secretly stored by Franciscan Father Anton Demeter.

The televised beatification Mass, concelebrated by 350 priests and bishops from Romania, Italy and Hungary, was attended by Antal’s brother and sister and former neighbors.

Preaching to the congregation, which included a delegation from Romania’s predominant Orthodox Church, Cardinal Becciu said Antal had prayed for all persecution victims in her makeshift prayer cell and offered an example of “serenity and courage” to contemporary young people.

“The communist regime claimed to eliminate God; (it) destroyed churches and formed young generations for atheism, but could not erase faith from the hearts of many families,” the cardinal said.

“The beatification of this 22-year-old is a happy occasion to confirm the Catholic community’s mission in this country — to preserve and transmit the heritage of faith and attachment to human and spiritual values with new courage and missionary impetus.”

Beatification is one of the final steps toward sainthood. A miracle attributed to the intercession of Blessed Antal would be needed before she could be declared a saint.

PREVIOUS: Pope prays for victims of ferry disaster in Tanzania

NEXT: Abuse crisis is like fire purifying church, says head of Canadian bishops