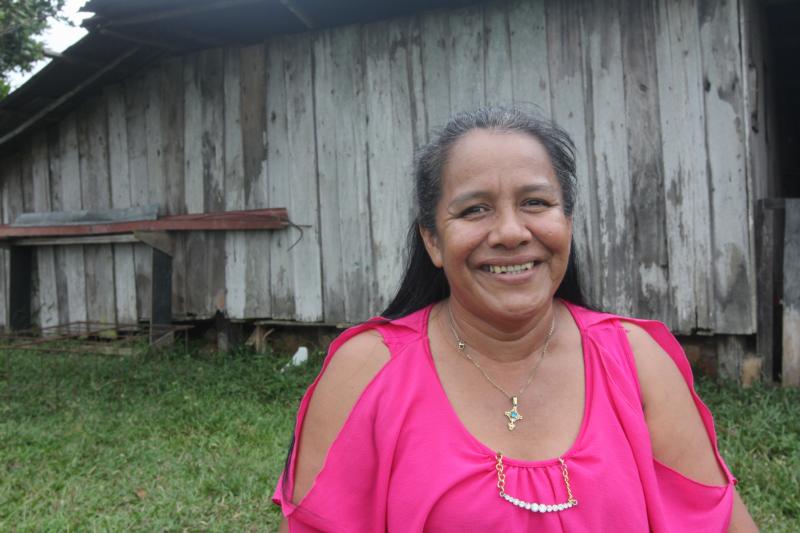 Maria Alis Ramirez, a social ministry worker in the Diocese of Florencia, Colombia, is one of several community leaders who have received death threats because of their defense of land and human rights. She is pictured in a July 25 photo. (CNS photo/Barbara Fraser)

BOGOTA, Colombia (CNS) — Catholic Church leaders are urging the Colombian government to protect community leaders who are being targeted by hired assassins.

As many as 300 local leaders have been killed since late 2016, when the government signed peace accords to end a half-century conflict with the Revolutionary Armed Forces of Colombia, known as FARC, the country’s largest guerrilla group.

Church leaders have called for President Ivan Duque, who was inaugurated Aug. 7, to take steps to stop the murders.

“These violations of the right to life signify an abominable and reprehensible breakdown in the sacred laws of the creator, the only lord of life,” Msgr. Hector Fabio Henao, who heads the Colombian bishops’ social ministry office, told Duque at a public meeting Aug. 24 in Apartado, in northern Colombia.

“We call on those who erroneously believe that they can achieve noble goals through violent actions,” he said, according to the bishops’ communications office. “These acts do not contribute to true reconciliation among Colombians.”

The threats and murders have increased “just when it’s assumed that we’re at peace,” Frank Varelas of the bishops’ social ministry office told Catholic News Service.

There are several possible reasons for that, he said. In some places, the end of the armed conflict may have revealed local conflicts that had been attributed to the war, but which actually had other roots.

In other places, which were under FARC control for decades, disarmament left a power vacuum that criminal bands have been quick to fill, fighting for control of land and the illegal drug trade, Varelas said.

Until the government regains control of those areas, local organizations are crucial for rebuilding communities battered by war, said Msgr. Henao, who also heads the steering committee of Colombia’s National Council on Peace, Reconciliation and Peaceful Coexistence.

By forcing grass-roots leaders to resign or flee, criminal groups weaken the organizations that hold communities together, he said.

Threats come by anonymous note, cellphone call, text message or helmeted motorcycle messenger. Too often, Msgr. Henao told CNS, there is no warning — only a bullet.

Maria Alis Ramirez, a member of the social ministry team in the southern Diocese of Florencia, tried to hold out after receiving a death from gold miners who were working illegally upstream from her farm. She had protested after they fouled the stream that provided water for her cows.

To protect herself, she changed her routine and avoided traveling alone to workshops and liturgies in the communities where she worked. But when her daughter received an anonymous threat against her mother, Ramirez, 50, decided the risk was too great. She left the countryside and moved into the city of Florencia for a time.

When community leaders are forced to flee, relocating brings a new set of problems. For Ramirez, it meant paying rent, an added expense. And she worried about her farm. After a few months, she returned home, despite the continuing danger.

Florencia, a city of some 165,000 people in the tropical Caqueta region, was hard hit by the violence. It is also a source of coca, the raw material in cocaine. Ramirez and local community leaders said conflicts there revolve mainly around land and drugs.

In urban neighborhoods, threats against leaders generally come from gangs involved in the sale of illicit drugs in neighborhoods. In rural areas, they often come from criminal groups vying for control of areas where drug crops, especially coca, are grown, said Rosemary Betancourt Claros, 48, who heads a federation of community organizations.

Criminal groups consider leaders of those organizations to be obstacles to illegal activities, said Diana Cabras, a specialist in protection with the social ministry’s program to strengthen civil society groups in a region of southern Colombia that includes the Diocese of Florencia.

When threatened leaders turn to their local parish or diocesan offices for help, church workers offer guidance and accompaniment, but providing protection is the government’s responsibility, Cabras said.

The Interior Ministry has created a special unit that assigns bodyguards, but the number of requests has outstripped its ability to respond.

Government agencies “must take appropriate steps to guarantee not only investigations after something happens, but also prevention,” Msgr. Henao said. “Agencies must coordinate to ensure that there is no connection between local officials and illegal armed groups and that there is efficient follow-up of early warnings that come from the affected regions.”

Betancourt and other community leaders around Florencia hope for quicker action from Duque. The new president has pledged to crack down on armed groups, criminal bands and drug traffickers, but has also said he will make “adjustments” to the peace accords.”

After more than half a century of violence, Betancourt said, “we want to truly be at peace.”