“(New) cases are always popping up and do not seem to end,” said the 38-year-old priest, who is known as Father Paschal.

Since 2013, he and his team have rescued at least 500 people from traffickers. They are generally women and children hired to become domestic workers in other countries, particularly Malaysia, with some recruited to become sex workers, said Father Saturnus, who chairs the diocesan commission for justice, peace, migrant and itinerant people.

“They don’t have documents and are deceived by recruiters with the lure of big salaries,” he explained, adding that many cross to Malaysia illegally by boat.

The government reports that about 1.7 million out of the 6 million Indonesians working abroad are illegally recruited and are likely arbitrarily exploited by their recruiters and employers.

Father Saturnus said more than 50 percent of the victims he has helped were from the Christian-majority province of East Nusa Tenggara. In recent years, the province has recorded the highest number of trafficking cases in Indonesia.

In 2014, the International Organization for Migration recorded about 7,190 people from the region were victims of trafficking.

“Victims are generally recruited by people who are known to their families,” the priest said. “But above them are the big players who are difficult to catch.”

Efforts by Father Saturnus and his team to track recruiters have not been in vain. At least 10 perpetrators have been imprisoned during the past five years and are serving jail terms of between one and nine years.

But in many cases, rescued victims prefer to be sent home and left alone rather than pursue legal action against their recruiters.

Such work has called for Father Saturnus’ team to adopt a very direct approach against recruiters, which has meant at times mounting their own raids on properties to rescue trafficked people because of police inaction.

As such, it has meant having to confront uncooperative police officers not willing to assist in cases reported to them.

Father Saturnus recalled a 2016 case in which he received a call for help from a female migrant worker who managed to flee from a house in Batam. She told him that dozens of other women were locked up there.

Receiving no help from police, the priest explained how he and his team took it on themselves to raid the house and rescue the victims.

The priest said lack of cooperation from police is an all too familiar occurrence, which has led him to believe that local officials work with the traffickers.

“It’s no secret … many officials are,” he said, adding that relations with the police have been strained at times especially with those who to cover up cases. 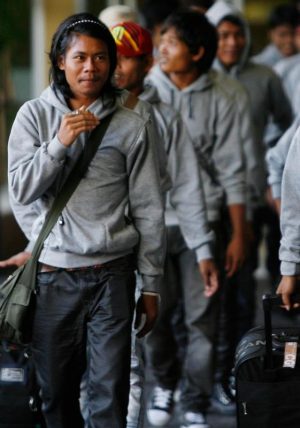 In July, Father Saturnus said he reported a high-ranking police officer in Riau for protecting a trafficker who was a relative of a well-known businessman in Batam. “He refused to arrest him. This was an injustice, so I reported him,” the priest said.

It paid off when a police team from another unit investigated and arrested the suspect Aug. 9.

Investigating human trafficking is hardly a one-man operation. Father Saturnus said his mission involves 20 lay volunteers. Parishioners in Batam are asked to contact the team if they come across a suspected trafficking victim or suspicious activity. “By involving them, I want to remind them that this is part of the church’s mission,” he said.

“His drive encourages me to do more against human trafficking,” he said. “Our church needs more priests like him, fearlessly dealing with criminals and taking on those who have power and money.”

“He has brought the church closer to ordinary (and suffering) people,” he said. “We work together in dealing with smuggled victims. Every time we contact him, he is always enthusiastic.”

Father Saturnus said his mission is guided by Christ’s mandate “to be useful for the world, for the marginalized, including victims of this crime (trafficking).”

He said he hopes the church will step up its efforts in combating human trafficking.

“The Indonesian church has done a lot, but we must act faster and do more if we are to prove a match against the criminals.”